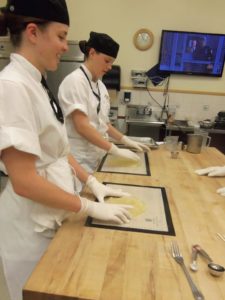 I’m going to write about networking in this entry, but first I want to give an idea of how important I consider this to be.  On Monday, I wrote an article about the things you learn at Auguste Escoffier that aren’t in the curriculum.  The first draft of that list began with “the Importance of Networking” in all caps and bold and wound up taking more than half of the article, and so I had to cut it out in order to give the rest of the entries space.  So it’s something you learn at Escoffier, and it’s important enough that it can carry an entry all by itself.

Let me add another preface by telling you that I am not what you would consider an extrovert.  I’ve done a fair amount of reading on the subject in scientific journals (your first indicator that I’m not an extrovert) and it’s supposed to work like this:  Extroverts gain energy by being in groups, while being alone tends to leave them drained and exhausted.  Introverts gain energy through solitude and lose it during social interactions.  So a party might send one person home feeling elated and full of vigor while another will collapse in their living room and sleep on the floor.

No matter which you are, networking is equally important.  So if you happen to be an introvert, you are going to have to exercise your social muscles so that being around people doesn’t leave you crabby, exhausted, and miserable.  I know what you’re probably thinking:  “I will overcome the importance of networking by being awesome at cooking.”  That’s a viable option for sure, but the trouble is that you don’t know what opportunities you’re losing by not building a web of colleagues. 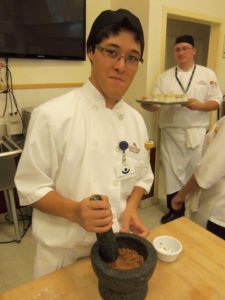 I ran into a theory about human social interaction in my daily reading that is jokingly referred to as the Monkeysphere.  The idea is that different monkeys can run in groups of different sizes depending on the degree to which their brains have evolved.  Some monkeys can remember ten, while others can do fifteen, or five, and so on.  Humans, it’s said, can remember somewhere in the realm of 150 people before their “Monkeysphere” can’t handle new members.

That might seem like a lot, but after you’ve spent some time in the professional world, you hit 150 people awfully fast between contacts, coworkers, classmates, bosses, friends and family.  This is why (and I recommend this to anyone who wants to be a chef one day) I keep a running spreadsheet of people I’ve met with their contact information and how I met them.  It might seem like a weirdly scientific way to handle social interaction, but every person you meet is important and deserves to be remembered.  If that means I have to take some time out of my day to update my spreadsheet, it’s the least I can do.

This is especially important in the era of social media.  Facebook, Twitter, Google+, and the myriad other apps that connect you with your network are no longer places to vent your frustration with whatever problems you may be having—now they’re a way to line up possible job leads, get your work out where people can see it, and establish a web presence.  They’re also an easy way to keep track of who is who in your Monkeysphere and keep in contact with people whom would otherwise disappear from your life entirely.  This is especially important if you’ve moved a lot.

Seems like a stretch, I know, but I have an example to back this up:  I have a Twitter account (@RyanHodros if anyone is interested) that I rarely use for anything other than sharing my writing and pictures of what I’ve been cooking or baking.  To be honest, I mostly ignore it.  But several weeks ago, Food & Beverage Magazine, not knowing my email address, contacted me via Twitter, and as a result of that exchange, one of my blog entries was republished on their webpage.  As a writer, this was a huge break for me, and probably wouldn’t have been possible without the network I’m building during my time at Escoffier.

And you never know which friends or colleagues might one day provide you with a huge break.  I was recently contacted by the Springfield Grille in Boardman OH, offering to fly me out to take part in a dessert/beer pairing event they’re holding in August.  I was shocked (and honestly a little suspicious) until I found out that a friend of mine from High School whom I haven’t talked to in almost a year is now the manager of that restaurant and had been following my work on Facebook and Twitter! 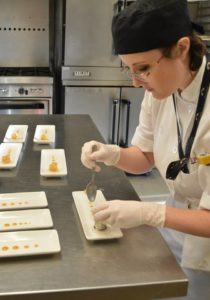 When my wife Tressa first started culinary school back in 2012, Chef Greg heavily emphasized the importance of networking and “getting your face out there.”  As a former member of a small community within the Navy where everyone knew everyone, this confused me.  Now that I’ve spent some time in a much wider community, I understand completely.  In a crowd of faces, it’s hard to stand out.  And any one of your fellow faces could be the one that helps you get your first big break.

As an introvert, I understand the challenge in getting out and meeting people, I really do.  It can be exhausting and unpleasant, to be sure.  But it’s important to remember that 1./ just because you’re an introvert doesn’t mean you don’t need friends, 2./ rewarding things are usually difficult to do, and 3./  it gets easier and easier every time.  As I said above, it’s a muscle that you need to exercise.

And if you’re an extrovert, know that I am very, very jealous of you!

A Busy Mom of Two Balances Family & Culinary School: “I Want to Graduate with Honors”