“What is the best thing you cooked in culinary school?” my Starbucks barista asked while he pulled my espresso; “what’s your favorite thing so far?” my little cousin wondered at Thanksgiving; “if you had to pick your best day in class, which was it?” a classmate questioned on the last day. While we covered an almost innumerable list of recipes in the kitchen, I know with certainty what dish was my absolute favorite. It wasn’t on the syllabus, we didn’t plate it up, and it wasn’t even a culinary recipe. Cronuts. We made cronuts and they were awesome.

The cronut adventure started almost as a joke, a far-fetched idea I threw out when my chef, Chef John Percarpio, asked what extra techniques or recipes we might like to cover before the end of the culinary program. I’d heard this fabled pastry, this elusive treat, the almost too-good-to-be-true combination of croissant and doughnut and I really, really wanted to try it. Chef John was totally supportive of my endeavor, he worked it into our schedule and during advanced baking week we set to create the ultimate fried dessert.

Before there can be cronuts there must first be croissants. Making croissant dough was incredibly exciting and satisfying. Chef John taught us about laminated dough, we did the math on how many folds and turns it would take to create the perfect number of layers (six folds to create 729 layers – go over 1,000 and you don’t have separation between the layers of flour and butter anymore). The dough was three days in the making; each day folding it, rolling it and folding it again to let it rest overnight. Of course, we baked some of it off for traditional croissants and they were fantastic – they came out of the oven deeply caramelized, smelling like rich browned butter, exploding from their crescents into so many delicate layers. But that was not our ultimate dream for the dough; it still had a future in the fryer. 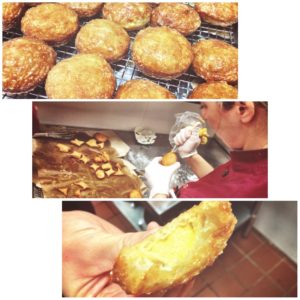 With only an idea of what a croissant/doughnut hybrid should be, my chef instructor, fellow students and I collaborated on a shape, filling and glaze for the cronuts as well as a technique on how we would fry them. In assembly-line fashion we slipped the puffed rounds of dough into the super-hot fryer on strips of parchment paper that we quickly removed from the oil. We turned them over as they darkened on one side and let them drain on towels once they were golden brown and delicious. We piped in a spiced cream cheese and pumpkin filling and dipped them in a brown-butter glaze. My classmates huddled around the wire rack where the cronuts rested and before the glaze even had time to dry, they were gone. They were so over-the-top decadent, rich beyond anything, incredibly satisfying and exactly what I’d hoped for.

Making cronuts was my favorite thing I did in culinary school because it was a challenge, a team effort, a silly dream that came true and it tasted ridiculously good. My Chef supported my crazy idea and made it happen for me, furthermore he turned it into a learning experience I will never forget. That was my favorite part of culinary school, the ability to take chances, discuss ideas, be creative and push the boundaries of your knowledge with support and encouragement.