Blog > Baking & Pastry Arts > No One Is an Island Watching cooking programs on the Food Network, it’s easy to get the impression that being a chef means working by yourself.  Chopped has individual chefs working frantically to meet time constraints and make a reputation for themselves, while shows like Good Eats or Guy’s Big Bite show one cook making an entire meal.

In reality, one of the biggest skills learned by students at Escoffier is teamwork.  Sure, there will be times when you have to make one or two things by yourself depending on the size of your class, but the class workload of any given day is large enough that no one person could do it all in a day.  Splitting the tasks in an efficient way that minimizes time wasted and reduces the number of steps you have to take will save you stress, energy, and sore feet.

Organization becomes paramount, but more importantly is forging real, meaningful relationships with your classmates.  Chef Kelly, who worked with our class for several months, placed a great deal of emphasis on this and our class was all the better for it.  You find yourself working harder because you don’t want to let your friends down. 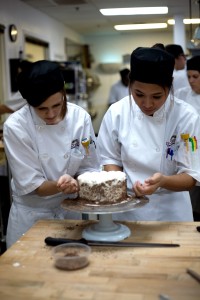 A great deal of artistic people lean towards the introverted side of the social spectrum (myself included) and so a lot of culinary and pastry students will no doubt struggle with this part of class, particularly if there are personality conflicts.  But it is of the utmost importance to get past this and work as a team.  Not only will your days be more pleasant, but your time in school will be all the more meaningful, and you will make friends that will stay with you a long time.

Teamwork became incredibly important when we got to the breads portion of the pastry arts curriculum.  Up to that point, most of the tasks we’d been asked to accomplish were simple start-to-finish tasks where the steps are all connected.  But when you’ve got a proofer full of dough puffing in the corner, the most important phrase becomes “who needs a hand?” as you’re waiting for your dough to reach that magic stage between underproofed and overproofed, and standing around with your hands in your pockets is out of the question.  Stronger students get more time with their hands in the dough while weaker students get remedial instruction from their classmates.  It’s a good system.

I’ve included my variation on the recipe for ciabatta that was provided in our textbook, both because it’s a difficult recipe and because it’s arguably the most versatile bread for the home.  You’ll need several hours, so it’s also the perfect recipe for a lazy Sunday.

Combine the water and yeast in a pitcher or large cup and stir to dissolve the yeast.  The water should be around 110 degrees, but pulling our your thermometer isn’t necessary.  If the water is slightly too warm as it comes out of the tap, to the point where you’d be concerned having to shower in water that hot but could muscle through if you had to, it’s where you want it to be.

Add the oil to the yeast water and whisk to combine.  Then add it to 16 oz of flour in the bowl of a stand mixer.  Beat with the paddle attachment until smooth.  It’s going to be incredibly runny and look more like cake batter than bread dough.  Don’t worry, that’s supposed to be happen.  Scrape the sides with a rubber spatula so the dough is pooled at the bottom of the bowl, cover in plastic, and let sit until it doubles in size.  This should take about an hour, but keep an eye on it.  If it overruns the side of the bowl, it’s going to make a giant sticky mess. With a spoon, stir the risen dough until it’s degassed.  Add the salt and second batch of flour.  Beat again with the paddle attachment until it’s smooth.  It should thicken significantly, but it will still be fairly runny by bread dough standards.  Let rise again, roughly an hour.  (I skipped the step when I made this recipe recently and didn’t get nearly the rise I wanted out of the bread.)

Pour the risen dough onto a floured surface and cut into 4 oz portions.  If you’re like me, this will mean you’ll have a bunch of tiny pieces of dough that you’ll need to reincorporate.  Take the largest piece of dough and put it in the palm of your left hand, then with your thumb, lightly press the smaller pieces into the center of that piece, and then stretch the larger piece around the smaller pieces.  Lightly roll this between your two floured palms until the seams are pressed together.  You want to be gentle to keep as much of the leavening as you can, but you’re going to pop some of the bubbles so don’t sweat it too much.

Place these 4 oz portions on a floured cookie sheet lined with tin foil or parchment paper.  Leave as much space as you can between each roll so they’ll have space to proof some more.  Cover with a clean towel and let rise again twenty to forty minutes depending on the temperature of your kitchen. Bake at 425 for twenty minutes and check your buns.  Chances are fair they’ll have browned slightly and you’ll be able to smell baking bread.  Technically, you can pull them now, but I recommend baking them another ten minutes, and potentially another ten after that, depending on how dark you like your bread. This is the best sandwich bread you can make, so I recommend some mustard, some corned beef, and some slaw, but that’s me.  It can also be cut into quarters and used as dinner bread, or cut in half and used as morning toast.