I recently started part of my externship writing beer reviews for 303 Magazine (my latest article, if you’re interested), and one of the questions I often get asked is “You’re doing beer writing?  Aren’t you a baking and pastry student?”  And the answer is yes.  I started the program in August of 2013 and if everything goes according to plan, I’ll be done in April and graduating at the end of the May.  But there’s more to it than that.

I’ve wanted to get into writing since I was around five years old, writing goofy kiddy stories for my mom on rainy days.  I didn’t develop a love of food and cooking until relatively recently.  Don’t get me wrong, I’ve always loved eating, but it wasn’t until I met my wife that I’ve really developed a love of making food.

And so when it came time to really buckle down and find an externship, I was shocked to discover from Chef Kelly that food writing was an available option.  I had planned on grinding out an externship somewhere (anywhere really) and then getting into my chosen field once all my prerequisites were met.  But one of the things you learn about Escoffier pretty early on is that they’re less interested in ticking off bureaucratic boxes and shuffling you out the door, and more interested in helping you realize your dream, whatever that may be.  (How I got into beer writing is a story for another day.)

By means of comparison, my wife is an Escoffier grad, both from Culinary and from Baking/Pastry, and she has absolutely no interested in being a writer.  Instead, she wants very badly to be a baker.  Chef Mark, the externship coordinator, has gone to great lengths to help her through some difficulties in finding an externship she is happy with, and she is now a baker at Udi’s and enjoys her work more than any other job she’s held.

My point being, if you find yourself wondering whether or not your particular dream in the food industry “meets standards,” it’s worth talking to someone about it because chances are good an exception can be made.  “If that’s your dream, we can make it happen,” Chef Mark told me when I went in for my externship meeting about becoming a food writer.  That really made my heart smile.

On the subject of my wife’s externship, I want to discuss another benefit from graduating from either of these programs—impressing people with your skills.  After my wife’s second day of work, we were having some people over for drinks to decompress and chat.  I decided, having something of a light schedule, that I was going to make donuts for the occasion.

One of the joys I discovered in pastry school is that I love recipe development.  So, to challenge myself and have some fun, I took the donut recipe from the school’s textbook, scaled it down by half, and messed with it a little in the hopes of making cakier, slightly denser donuts.  Here’s what I came up with: 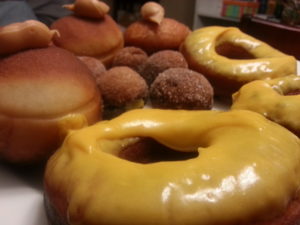 Combine the yeast with 4 oz of the warm water.  Let it sit for about five minutes or until it starts to foam up a little.  Combine the shortening, sugar, salt, mace, and cinnamon in the bowl of a stand mixer (or in a stainless steel bowl, if all you have is a hand mixer) and mix with a paddle until well combined.  Add eggs one at a time, mixing thoroughly.  Add the 1 oz of water and mix briefly.  Add the yeast and mix briefly.  If you’re using a stand mixer, you’ll want to switch to the hook attachment.  If using a hand mixer, you’ll want to do this next part by hand.  Add the flour.  Once it’s incorporated, knead for five to ten minutes or until your dough is springy to the touch.  It should be pretty soft, but not tacky.  If it’s sticking to your countertop, dust it with flour.

Let rise until it doubles in size.  Then, on a surface dusted with flour, roll the dough out to about ½ inch thick.  Cut out whatever shapes you like (I like bigger donuts, but that’s me).  Let them rise, covered by a clean towel or plastic, for another half hour to an hour.  The less you let them rise, the denser they’ll be, but don’t let them overproof and deflate or they’ll turn into hockey pucks.

Fill a stock pot about two inches high with vegetable oil (any will do really, but lighter flavored oils are best, and avoid olive oil both because it’s expensive and because it will give your donuts some funky flavors).  Heat it to between 350 and 375 degrees Fahrenheit (using a candy thermometer is best for this part) and fry them, flipping each donut about halfway through.  Drain them thoroughly on a wire rack.

You can dress these donuts however you like, but the easiest way to combine a cup of sugar with about half a tablespoon to a tablespoon of cinnamon and toss them in that mixture.  I also iced some with cream cheese frosting and dulce de leche frosting, but that’s me.  🙂

Anyway, I paired the donuts with a couple of locally made beers and it was a huge hit!  I’m something of a glory hog, and so it was really satisfying that I could make everyone’s day a little nicer using the skills I acquired in school.  A year ago, the idea of deep frying something in my own kitchen seemed impossible, and now it’s almost blasé!