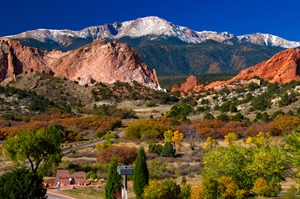 In the middle of September, Boulder, Colo., was hit by a storm that was described as a once in 1,000 years rain, which brought on a once in 100 years flood. Of the many families and businesses who were deeply affected by the eight days of precipitation, farmers and restaurants suffered some of the most serious damage, and the region is still working to recover.

Farmers, restaurateurs try to rebuild
Boulder has been an epicenter of progressive food cultivation and cooking practices, and much of that reputation has been based around its vibrant farming and entrepreneurial restaurant cultures. Now the city’s residents are coming together to help those communities rebuild and return Boulder to prominence as a bastion of sustainable food sourcing.

The NoCo Farm Flood Relief Coalition is one local group that is holding events to help farmers rebuild. More than a third of the farms and ranches in the Boulder area received flood damage and, together with other groups Local Food Shift and Tables to Farms, NoCo began its effort with a resource aid meeting for farmers who were affected by the flooding.

“Our local farmers have experienced a lethal blow to their fall crops, their water infrastructure and their primary source of income,” Michael Brownlee, co-founder of the Local Food Shift, said in a press release.

Table to Farms has also been working on its own events to help recuperate flooded farms. Founded by Boulder-area chef/owners Bradford Heap and John Bachman, the group has been hosting fundraising dinners and encouraging local restaurants to collect goods to benefit Boulder County farms via the Local Food Shift Group.

How to help
Many Boulderites experienced hardship due to the flooding, but the crisis also served as a rallying point for locals to come together and work to help one another recover. These initiatives provide locals who have gone to Boulder culinary school or taken Colorado cooking classes to use their skills to rebuild their community.

“I believe that people in the community started to help out more because they are becoming more aware of food, and the preserved integrity of food that is produced within Colorado,” Michael Drazsnzak, executive chef at Colterra, where one of the fundraising events took place, told Denver Westward. “There is a fundamental shift in our diet that is allowing us to put the farmer back in the forefront.