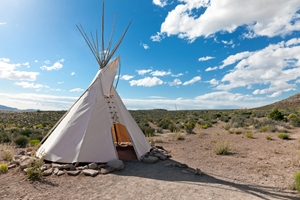 As sustainable, farm-to-table food sourcing continues to be the big thing in American dining,places outside of the traditional restaurant hotspots – New York, Chicago, Los Angeles – have played just as big a role in its popularity.

For instance, Native Americans, with their deep tradition of having a close attachment to the earth, have contributed mightily to the farm-to-table movement. And that group’s involvement has also led to exciting food opportunities on Native American reservations.

Native Americans as pioneers of farm-to-table
In November, the Talking Stick Resort, in Scottsdale, Ariz., which is run by the Salt River Pima-Maricopa Indian Community, hosted the 2013 EXPO AIGA “Cuisine Beyond Borders” cook-off. There, chefs competed to come up with the most delicious and original dishes that also lived up to the farm-to-table standard.

Ron Dimas, who won with his Broken Arrow Ranch Venison Loin with a ragout of deer liver and heart, with roasted butternut squash puree and mesquite flour crepes, welcomes the healthier farm-to-table trend, especially because of its connection to Native American cuisine.

“Traditional cooking is so natural because it comes from the Earth,” Dimas told Indian Country Today Media Network.

Farm-to-table also plays into the ideal on many Native American reservations of being completely self-sustaining. In fact, many Native Americans don’t consider the movement to be anything new – they see it as traditional native cuisine going mainstream.

“Native foods are not a trend,” Nephi Craig, executive chef of the fine-dining restaurant at the White Mountain Apache Tribe’s Sunrise Park Resort Hotel, told ICTMN. “They are a way to recover our communities and decolonize ourselves.”

“The Obama Administration is working hard to create economic opportunities in rural tribal communities,” USDA Rural Development State Director Terry Brunner said at a ceremony announcing the grant. “This strategic investment will help Native farmers find new markets for their products and offers a path to sustainable farming in the 21st century.”