Lance McWhorter began his career in the culinary arts like most chefs, as a teenage bus boy in a hometown restaurant. With a career chef for a father, it didn’t take long in a kitchen before his first job became a true passion. Choosing to then join the military, McWhorter never missed a chance to work in restaurants between deployments, learning more and further fueling his love for cooking for 10+ years. It wasn’t until his time in the military, firefighting and security ended that he chose to pursue his passion full time and open a restaurant in the eastern Texas town of Jefferson.

For McWhorter, McGarity’s Saloon is a culmination of everything he learned from his father, his time in kitchens and his career in the military. With a menu inspired by the flavors of the places he was deployed to as well as the Cajun and creole influences of his upbringing, nothing makes this online culinary arts certificate student happier than finally being able to hear the words “yes chef” in his very own kitchen.

We caught up with Lance to learn more about his restaurant, how the military shaped his career as a chef and why he recommends the online program to others in the industry.

Auguste Escoffier School of Culinary Arts: Can you walk me through your culinary background: where you started, some of your past positions?

Lance McWhorter: I got my start in the industry as a busboy and dishwasher in a busy tourist town diner. My dad was a chef and restaurant manager at a restaurant across the street, and he pulled some strings to get me hired on. I instantly loved the job, even though it was very overwhelming at first, but I quickly moved up to doing some prep.

After that I spent the next few years working at a few other restaurants before joining the military. I was never a cook in the Army or Navy, but I was still passionate about food and cooking. I traveled to a ton of different countries and soaked up as much of their cuisines as possible. Ordering food without speaking the language was interesting to say the very least! But it opened my mind to all sorts of amazing cultures and their food!

When I wasn’t deployed, I spent a lot of time moonlighting in restaurants and bars, making friends with cooks, chefs, fishermen, and learning as much as I could. I always tried to find a kitchen to hang out in!

After a few years as a professional firefighter, bouncing around for a while, and doing contract security for the State Department and Department of Defense in Iraq, I gave it all up and decided to go for it full time in the culinary world. The building that houses McGarity’s Saloon has housed a livery as well as masonic lodge.

AESCA: Do you feel like your time in the military helped in your career as a chef? How?

LM: Absolutely! The military shaped every aspect of my life, but in a way I think that it also hurt me a bit. When I first jumped into full time restaurant life in the Texas Hill Country after leaving Iraq, my leadership experience gained in the military pushed me ahead of other cooks for leadership positions. I guess you could say that was a good thing, but I had to step up and learn a lot of things really fast. After about 6 months, I found myself as the head chef of a booming restaurant and had to prove myself as not just a leader, but as the best cook in the room. It was very challenging and exhilarating! I think that the military got me into that situation, but the leadership abilities, work ethic, and attention to detail learned in the military definitely got me out of it!

AESCA: You recently helped opened a restaurant in your town and now serve as executive chef. What has that experience been like?

LM: I actually didn’t help opening one, I was responsible for the whole thing! From concept to creation, recipe and menu development, photographing food for social media, training my kitchen staff, the works. It was absolutely insane! Luckily I have a great (albeit very small) staff that has absolutely busted their tails to make McGarity’s Saloon a success! We are a casual fine dining restaurant with food paying homage to many of the places I have traveled, so you see a lot of Asian and Middle Eastern touches, as well as the mash up of multi-cultural Texas cuisine and a lot of Cajun and Creole influences from my East Texas heritage. It has been exciting to introduce my own style of cooking to an East Texas audience! The menu is inspired by the East Texas dishes he was raised with and countries he visited in the military.

AESCA: What have you learned so far in that journey that you wish you knew at the beginning?

LM: Honestly not much… the trip has been more important than the destination and I think that learning “on the fly” really develops you as a chef. I do wish that I had started out as a younger man, but then I would have skipped so much in my development. The kitchen was always my escape… as a teenager it became a means of survival. As an adult it became a passion. Now it is a reality. I think of where I would be in my career if I had camped out at the back door of The French Laundry, looking for guidance, leadership, and opportunity as a 20-year-old, it would have been amazing… but, I would have missed out on all the cultural exposure that turned me into the chef I am today. No regrets.

AESCA: What is the most rewarding part of being executive chef?

LM: The most rewarding part of being the exec is taking the opportunity to sneak out of the kitchen and visit with our guests. Hearing their praise, and criticisms, and applying both to your work, is a fantastic feeling. Although I must selfishly admit that the praise is always best! Haha!

AESCA: What is the most challenging?

LM: The most challenging part is dealing with “those” customers… people that have it in their mind to pick everything apart, treat my front of house staff poorly, and so on. Social media has made that even worse. Giving anyone a platform to rant and rave and pitch little fits. I try to find humor in it though. I have been known to get into it with people a bit! Most importantly, I will not allow anyone to mistreat my front of house staff, ever. I will show someone the door personally. I honestly believe that more owners and chefs should take that route more often. McWhorter was able to design the restaurant like he wanted.

AESCA: Why did you want to attain a culinary education at this stage in your career?

LM: I get asked this question more than any other and my answer is pretty simple. I’m doing it for me. Life never allowed me to get an education as a kid, and I never let that stop me. I educated myself and sought out those who could teach me. Most of my life has been a struggle, many highs, and some debilitating lows, but in the end, I wound up right where I always wanted to be, on the line. Culinary school is the foundation that I never had. I built a darn good house, but I know there are cracks in the floor. Culinary school, whether attended before or after you start cooking professionally, is a must.

AESCA: Why did you choose an online program?

LM: I looked at many campuses and programs when I decided to pursue my education, and it was the only platform that worked with my desire, my need to stay in the kitchen. A lot of people naysay when it comes to an online culinary program, but I will defend it to the death. It’s just like any brick and mortar campus, you will get out of it what you put into it. A great friend and mentor chef to me (who has worked with some of the greatest chefs in the world) was mentored himself by Chef Graham Mitchell and he told me that if Chef Graham was involved, it’s legit. So I jumped in. Best move ever! 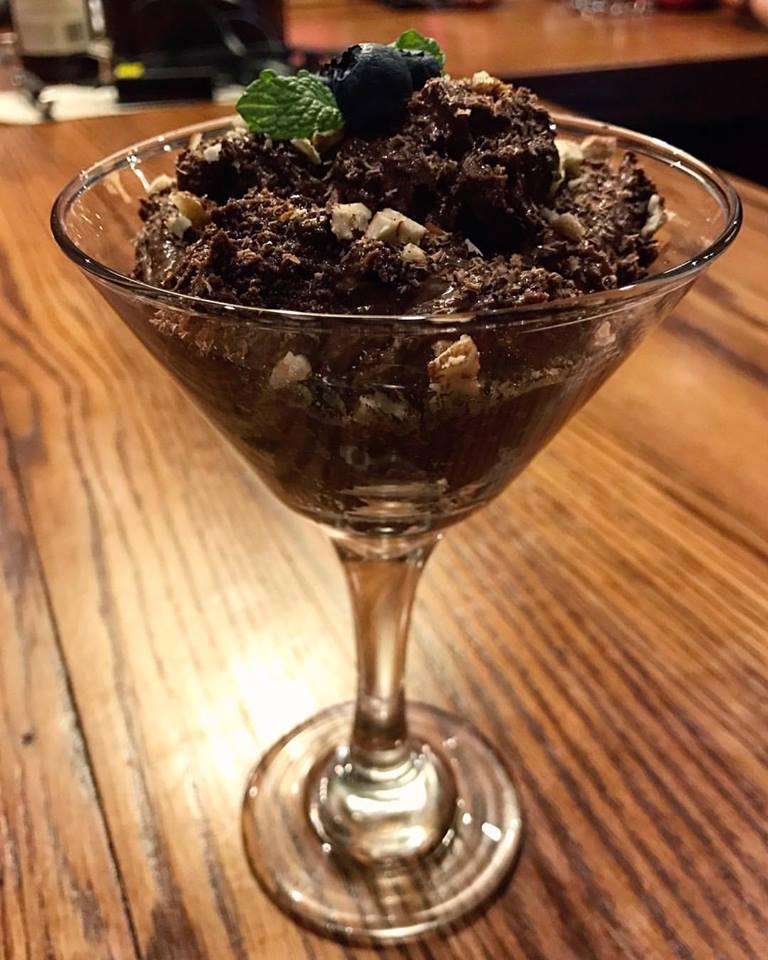 McWhorter said his pastries and desserts have greatly improved since he began the online program.

AESCA: How do you feel it’s helped in your career so far?

LM: In every way! The cracks in the foundation I spoke of before are patching up nicely! Now I don’t just know that things work, I know why they work. It has made me a better cook, a better baker, a better leader, a better businessman, and most importantly, a better teacher to my staff. And believe it or not, outside of feeding people while making a little bit of money, that’s what it’s all about, teaching. We as chefs are responsible for the development of the next culinary superstars.

AESCA: What lessons in particular do you feel have been most helpful?

LM: For me, [it’s been] baking hands down! I was an idiot when it came to baking! Now I’m turning out fresh bread for my restaurant! But in all reality, everything has been helpful. In this career path, you are always learning. The day you stop learning is the day you should quit.

AESCA: Would you recommend Escoffier Online to others?

LM: I absolutely would! The online program at Escoffier has honestly been incredible! As I mentioned before, there are a lot of naysayers out there, and I took them all into account, read reviews, talked to Chef Graham, talked to my own mentors, and made the decision to pull the trigger on it. I have loved it, and feel that I have received a fantastic education at Escoffier Schools and would recommend it to anyone! And when told by naysayers “You can’t learn to cook online!” I just tell them that I guess every cookbook from Marcus Gavius Apicius to present has been a waste of time and that all those cooking shows, magazines, and blogs are completely worthless from an educational point of view! Haha!

Your choice of where you get educated is your own, it has to fit your needs and your schedule, if online does that for you, do it! If brick and mortar does it, do that! Your education is for you, it is not going to get you a job on its own or a Michelin star (let alone 3). The application of that education on the line is what puts you on the path to becoming a chef. Becoming one is only accomplished through the combination of experience and education, hard work, dedication, and NEVER giving up!

The Advantages of Online Learning: Why Online Education is Here to Stay