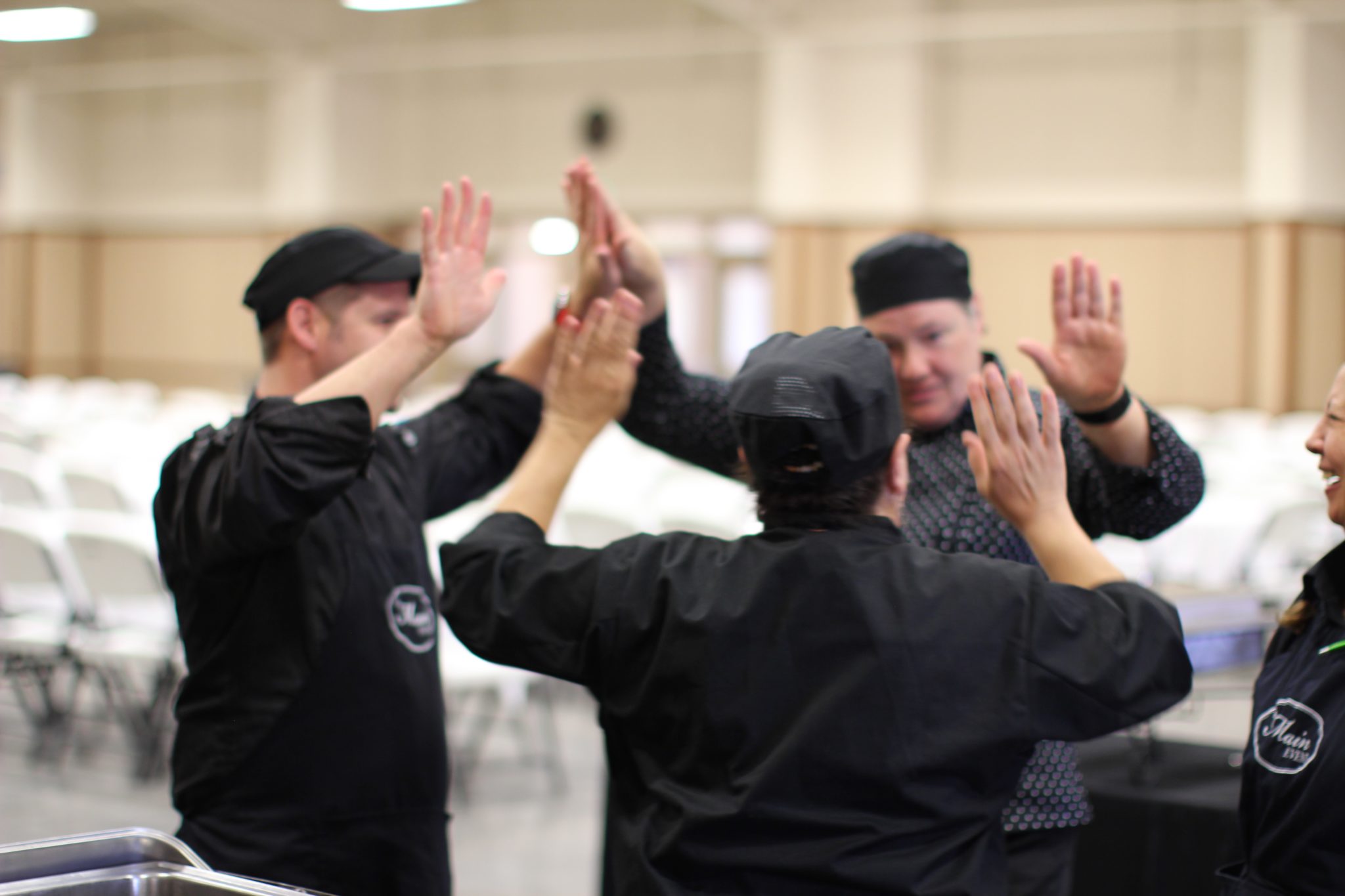 It isn’t every day that three classmates travel from across the country and continent to work together for one event. But that’s exactly what happened the first week of August when Scott Brooker, Joann D’Amelio and Kristen Douglas, all students in the online culinary certificate program, gathered to help feed hundreds of hungry cyclists during the Tour of Utah-one of the world’s most premier cycling competitions.

Gathering in Kristen’s hometown of Richfield, Utah, the classmates combined all their culinary knowledge (and energy) for a marathon 30-hour catering event. It doesn’t surprise us that the food was amazing, the cyclists were happy and they were told more than once that it was the best catering they had ever had on the tour.

Read more about the whirlwind experience and Kristen’s account of the event:

When Scott and Joanna arrived, we wanted to take them to a farm-to-table restaurant and it just so happened that to get there is the same exact route the professional cyclists were going to be riding the day that brought them to Richfield. So, not only did we have awesome company with amazing food, they also got to see the splendors of Utah and drive on the exact bike route. The mountain portion is called Hog’s Back, and it’s sheer cliffs on both sides of the road. My Canadian and New Jersey friends were not very comfortable on that road! Scott seriously was hiding his face and not looking out the window. It was hilarious. We were all laughing, except for him.

The day before the event we prepped the dressings and sauces, set out all the service, arranged the front-of-house, organized our kitchen, and got our mise en place ready to go. On the day of the event, we cooked for 310 people (thanks to Scott for getting an actual head count). Half of that number are actually the professional cyclists, from all over the world! Scott helped out with his French, Joann helped with her Italian, and Joann’s friend Marina helped with her Spanish. The rest of the people we fed are the cycling team owners, sponsors, support staff, physical therapists, and mechanics. I believe they put in 123 miles that day. They consume 10,000 calories a day all in two meals and snacks, so you can only imagine how much they inhaled for dinner (dinner was the equivalent of 800 meals, as was breakfast the very next morning.) Station 2 belonged to Joann…Pasta, pasta, pasta. I put her in charge and why wouldn’t I? I had a true Sicilian in the house! She made the marinara sauce and it was absolutely WONDERFUL! We also had my signature Frascati sauce, all beef meatballs, and our fresh grilled chicken breast cut into strips.

Station 4 was a huge salad bar with our signature strawberry candied walnut salad paired with our house poppy seed vinaigrette (which I need to get patented because it’s just so good) as well as a wide array of fresh greens, fresh cut vegetables, various salad toppings, fresh baked rolls, Scott’s delicious sage compound butter, and fresh house bruschetta. (They ate the entire bowl of bruschetta!)

It was all buffet—as in it was all you can eat and it was self-serve. Surprisingly we had only reasonable waste and the food safe leftovers were donated to our local battered women’s shelter. We provided real plates and silverware. All the equipment in the photos is owned by The Main Event (my catering business), as pictured in the front-of-house and back-of-house images, other than the actual kitchen.

As soon as the last eater left the building, we immediately stripped and laundered 36 tablecloths (thank you facility for having a washing machine on site). The stations were rearranged and set up for the breakfast service. We then turned our attention to sauces and the fresh dishes on the menu for breakfast. This required us to remain without sleep through the night at the site. My classmates were troopers who powered through (with some caffeine, of course) to get the task completed. I was afraid I had killed them and that they would never return or answer another e-mail or text, but they still like me, which is a shock after working them for 30 hours straight! The students had to stay on-site and cook for 30 hours straight.

Station 1 was our build-your-own breakfast burrito bar. Scott spent the requisite hours at the griddle turning our egg, bacon, sausage, and green chilies into a scrambled base. The buffet allowed them to grab a fresh griddled tortilla, choose the amount of egg mixture, and then add their choices of guacamole, sour cream, house pico de gallo, picante sauce and more cheese. It was a hit. 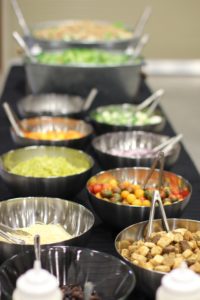 The breakfast included a make your own breakfast burrito bar.

Station 2 was a Greek yogurt and cereal bar, with hot and cold cereals (tons of oatmeal and rice as per their request), nuts, granola, dried fruits, our house mountain berry syrup, locally sourced honey, agave nectar, soy and almond milks.

Station 4 was a cheese and fruit bar, which is rather self-explanatory.

Station 5 was coffee and tea. But really it was all about the coffee (700 cups worth!)

Here is where it became interesting, as this year they also asked us to provide a VIP brunch at the starting line pavilion at our city Park. Local dignitaries and business leaders were given front row seating to the start of the third stage of the race. We were asked to provide breakfast relleno casserole, fresh house pico de gallo, picante sauce, guacamole, sour cream and cheese toppings. House cinnamon rolls were not fun to make at four in the morning but they were heartily received by our guests. We also provided them with juices, milks and coffee service as well as fruits, cheeses, and another yogurt parfait bar described above. Thank goodness there were leftovers to augment this service which happened to be thirty minutes after the last eater left the breakfast area. Whew! Culinary zombies exist and they perform miracles and no one got hurt.

This was our third go at tackling this event. We have wowed and impressed our clients each year but having an Auguste Escoffier School of Culinary Arts education times three made it possible for us to receive our new favorite compliment. “I have been with this tour (which also has other locales in North America and Europe) for nine years, and this is by far the best food and catering we have received.” We were told by various sources that we “hit it out of the park” and the final feather is they are working on a different stage of the race next year to utilize our services twice. This is super exciting and super stressful at the same time, and our Canadian and Italian soul mates are already committed to return. (Gluttons for punishment…) As you can tell from the pics, we are friends for life. It was the most amazing experience sharing this with my Escoffier online classmates.