November 21, 2016 – Chicago, IL – Escoffier School of Culinary Arts, a leading provider of world-class culinary education, today announced the newest additions to its Disciples d’Escoffier; a prestigious global society focused on the promotion and preservation of excellence in cuisine, culinary education, wine culture, spirits and hospitality. The new disciples include some of the area’s top culinary leaders – Chef Curtis Duffy, chef and owner of three Michelin star restaurant Grace; Duffy’s inspiration and former home economics teacher, culinary educator Ruth Snider; and Doctors Robert and Sonat Birnecker, founders and owners of KOVAL Distillery. Escoffier also announced a partnership with Duffy to promote the importance of culinary education to aspiring culinarians through a number of presentations and events involving the school as well as a $25,000 Curtis Duffy scholarship program. The disciples will be recognized at a seven-course dinner and induction ceremony at Grace on November 21. The Disciples d’Escoffier International is a premier gastronomic society with a worldwide membership of more than 20,000. The goal of the Disciples d’Escoffier International is to honor the memory of French chef, restaurateur and culinary writer Auguste Escoffier, promoting and preserving his work and maintaining the great culinary traditions in which he started. Michel Escoffier, the great grandson of the renowned chef and president of the Auguste Escoffier Foundation and Museum, will be in attendance from France.

“The esteemed Disciples d’Escoffier promotes culinary education and apprenticeship and was designed to inspire and encourage others to continue to pursue the highest standards,” said Jeremy Wheaton, President and CEO of Escoffier School of Culinary Arts. “Our four newest inductees exemplify local culinary at its best and truly personify this mission in their work.” 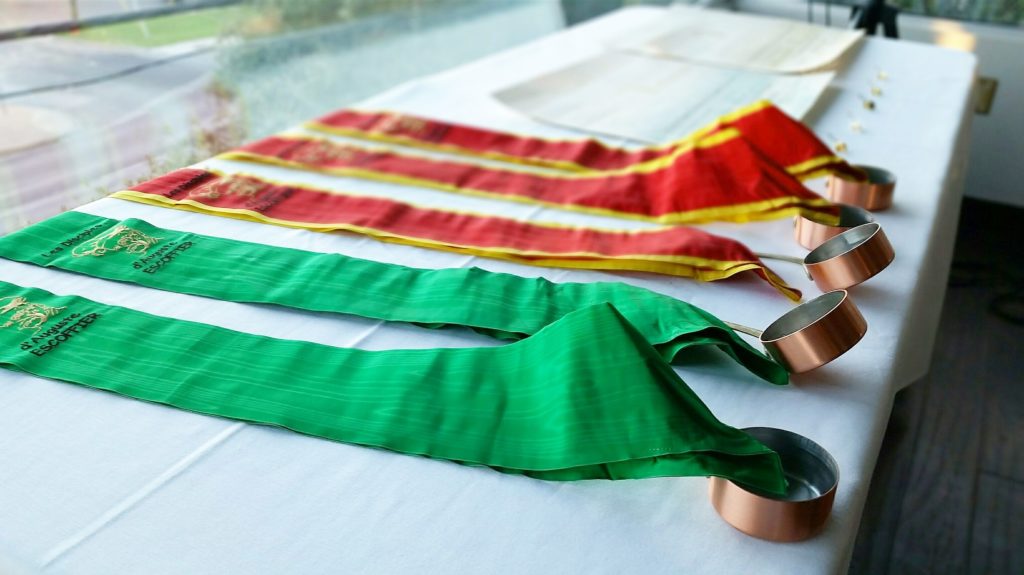 Curtis Duffy overcame a difficult childhood and family tragedy to become one of the most acclaimed chefs in Chicago, receiving numerous recognitions throughout his culinary career. In addition, Duffy was recently the subject of the documentary For Grace, a James Beard Award nominated film. The movie chronicles the chef’s remarkable journey of opening his restaurant, Grace. Duffy’s teacher, Ruth Snider, sparked his initial interest in cooking and remains one of the strongest support systems in his career. The two will be joined in the Disciples d’Escoffier by Dr. Robert Birnecker, one of America’s top distilling experts, and Dr. Sonat Birnecker, co-founder  and president of KOVAL Distillery, which produces organic whiskey, liqueurs and speciality spirits from scratch, embracing a grain-to-bottle mentality.

“I am truly honored to be inducted into the Disciples d’Escoffier,” said Curtis Duffy. “This is one of the great honors a chef can receive, and I am humbled to be able to share this with my amazing friend and teacher Ruth Snider. Such an honor…”

About Escoffier School of Culinary Arts:

In addition to ground campuses, the Escoffier Online Culinary Academy is the first-ever online culinary school, offering professional culinary training for aspiring chefs and food enthusiasts alike. Modeled after the most prestigious culinary institutes in the world and inspired by the world-renowned Escoffier name, Escoffier Online offers a comprehensive curriculum of cooking techniques and fundamentals. https://www.escoffieronline.com