Three things happened in the past week that got me to thinking about the process of searching for a job.  The first is that Chef Kelly, in preparation for the entrepreneurship/business portion of the culinary arts curriculum, emailed my Pastry Arts class asking for resumes from anyone willing to offer them as examples to be used in class.  Being somewhat proud of my resume (and unable let Chef Kelly down) I submitted mine.  The second is my wife left her job in a large production bakery to become a sauté chef in a somewhat small but upscale restaurant in Louisville that happens to be next door to a brewery I will soon be reviewing.  The third is my brother (an accountant) just got his Master’s degree in accounting and instantly started looking for new work to match his new credentials rather than looking for promotions within the company he currently works for.

As a child, my dad was a Teamster his entire life.  He worked for the same company for more than two decades and then retired.  I think many people have similar experiences to my own, and as a result, we tend to treat the “job search” portion of our lives as a temporary inconvenience.  It’s the thing you do in order to find the task you’ll be accomplishing until the day you retire or die.  As a result, I don’t think job search skills are something we focus on enough as a culture of young people looking to take over the planet. And why should we?  That’s how it’s always been.  Before the discovery of the New World, people took apprenticeships and applied the skills acquired during that training to make a living, raise a family, and live a life.  After WWII, our grandfathers (or great-grandfathers, depending on what generation you belong to) did the same thing—left the service, joined the work force, retired.  It’s a tried and true system, and it worked!  For generations upon generations!

And that’s all well and good.  Our grandparents also dealt with polio as a very real threat to their health.  Many of them coped with a lack of electricity, or running water.  My own grandfather was once reduced to stealing coal to warm his family.  The point being, a lot has changed since then, and the harsh reality is that the nature of “having a job” has also changed, in a very fundamental, very irrevocable way.  Chances are fair that most people of my generation and beyond won’t have “a job” that they keep until they collect social security.  Chances are good that a consisting of interlinking job experiences that build one upon the next is the future. Let me digress for a bit to describe my own job path down through the years.  In high school, I played varsity football.  In college I was a janitor at a highway rest stop, and a staff member (eventually editor) of the literary magazine of my college.  After college, I worked construction, laying flooring until winter set in and the work dried up.  Then I worked customer care for a cell phone company.  Interspersed in all of this, I worked for the YMCA summer camp system as a counselor and eventual director.

Then I joined the Navy and worked for US intelligence as a student, translator, analyst, manager, and eventual project lead, all the while continuing my education as a homebrewer, writer, novelist, and cook.  After a year of schooling as an engineer (after the Navy) I started studying to become a chef and started work as a beer reviewer.

I’ll admit, this is a scary way to look at the future.  You have to adopt an attitude of constant, on-going education.  And I have yet to experience the security we’re used to feeling from generation upon generation of our ancestors settling into one trade, mastering it, and using it as a way to thrive.

But this is the future.

I personally consider it to be a boon because the job market has restructured in such a way that jobs no longer have to be boring.  Sure you sacrifice security, but you gain a wider variety of experience.  You might be a bread baker today, a sauté chef tomorrow, and a pastry chef next year.  You might write for a magazine now but make desserts for Frasca later.  You never know what might lie around the corner, and as a self-proclaimed professional adventurer, I think that’s absolutely wonderful. 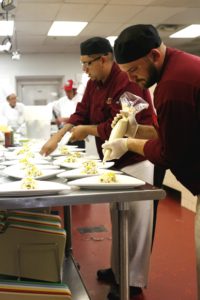 The important thing to take away from all this is that Auguste Escoffier has recognized this trend and gives its students the tools they need to thrive in this brave new job market.  Aside from the wide array of culinary training we absorb, students are drilled and redrilled on job search skills, from resume writing to interviewing to opening your own place.  There is no “This is how you decorate a cake, and get used to it” at Escoffier.  You choose your own destiny, while bringing with you the tools you can use to change your mind down the line.

It’s easy to feel like “a loser” for hitting 30 and not having a decade of experience in one field under your belt.  Trust me, I’m 31.  I know.  But keep in mind that Henry Ford didn’t open the Ford Motor Company until he was well past his 30’s.  Statistically, slightly over a quarter of you reading this drive a Ford.  Think about that for a moment.

Not all of you reading this want to be the next Henry Ford.  But if you’re interested in getting into culinary industry, you have that adventurer’s itch, and Auguste Escoffier can give you the tools you need to scratch it and still pay the bills.  And that’s something I personally am very grateful for.