Blog > Sustainability > Plant-Based vs. Vegan: Why Chefs Need to Know the Difference

Most people in the Western world have heard the terms “vegan” and “plant-based,” but may not fully understand what each type of diet choice entails. And sometimes, these two descriptors can be used interchangeably, even though they’re technically quite different.

Anyone working in a kitchen that offers these types of options on the restaurant menu needs to know all the different approaches to preparing these foods and be extra attentive to detail. We’ll discuss the differentiators between the two lifestyle choices, and how culinary school can help prepare aspiring chefs to cook for these audiences.

What Is Vegan, Technically?

The first thing to know is that there are many different paths to veganism, types of vegan lifestyles, and personal choices that vary for each individual. Some people decide to go vegan because of animal welfare concerns. Some people simply just feel better physically and mentally by eating a vegan diet. And of course, many vegans have a combination of these reasons as their foundation for the diet choice.

Veganism, by definition, means that a person chooses not to eat animal products. The breadth and depth of this varies, however. Some folks refuse to eat meat, dairy, and most animal products, but they may still consume animal by-products, like honey for example. Other vegans consider themselves “purists” and eliminate any animal product whatsoever from their diets, as well as making other lifestyle choices like avoiding the use and purchase of clothing, cosmetics, or household goods made with animal products.

Additionally, under the “vegan” umbrella, there are many subsets of lifestyle choices, including the raw vegan diet (eating vegan foods that are raw or heated at temperatures below 104–118°F) for instance. And the list goes on. Since veganism is a lifestyle choice, there’s truly no limit to how people choose to live it out in their daily lives.

“I’d say the biggest misconception is that it’s limiting or bland, when in fact, I think that it opens us up to an entirely new set of ingredients because you start to look a little more closely at what’s growing in the world. It’s endless – the bounty is really endless.”Lauren Lewis, Private Chef and Plant-Based Enthusiast

Differentiating the Plant-Based vs. Vegan Diet

“Plant-based,” on the other hand, is a blanket term that can describe vegans, vegetarians, or even those who want to limit their consumption of animal products without avoiding them completely. Many people decide to make smaller-scale efforts to reduce their intake of meat and dairy, by participating in “Meatless Mondays,” for example.

Vegetarians, by definition, don’t eat meat, fish, or poultry, but they may still eat animal by-products, like eggs, milk, or honey. Pescatarians use seafood as their only source of meat, but the rest of their diet closely resembles vegetarianism.

So there’s quite a bit more wiggle room in terms of structure with a plant-based vs. vegan diet. This makes it an attractive option for people who, say, opt for a beet burger but still want the gorgonzola. A plant-based diet is arguably easier to maintain as well, since it doesn’t necessarily require checking every single label for hidden animal products.

Cooking for Plant-Based and Vegan Customers

As a chef, it’s crucial to know the nuances between plant-based vs. vegan diets. Restaurants that offer these types of foods will get customers with many questions, as well as special requests. You’ll need to be both patient and knowledgeable, as people are trusting you with the lifestyle choices they hold dear to them.

Additionally, many people with dairy allergies or other food sensitivities may come to plant-based or vegan restaurants because they feel safer eating there, so their health and wellbeing will depend on the accuracy of their order. 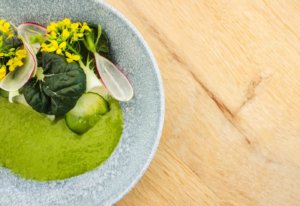 You’ll need to be very mindful about preparing food and attentive when handling both animal products and plant products. Many customers who eat a plant-based or vegan diet will expect meat to be prepared in a separate workspace with dedicated meat-free equipment, for example. Of course, if you’re in a vegan kitchen, this issue will take care of itself.

Sourcing animal products and plant-based products is another factor to consider. Often these ingredients need to come from different distributors. If you’re developing a menu, be aware of the financial and logistical aspects of acquiring the foods you need for your dishes.

A restaurant that combines meat-based meals as well as vegan or plant-based options makes family dining easier, because there tend to be options for everyone. But if your restaurant isn’t strictly known for having these options, you may need to promote your plant-based offerings, so that vegans and plant-based dieters know you’ve got them covered.

If you want to start your own plant-based or vegan kitchen, you’d better be excited about finding substitutions and trying creative takes on dishes. Few people will want to dine if the food is dull or lacking flavor. The good news is that vegan or plant-based menus require a lot of creativity and experimentation.

“By adopting a more plant-centric diet, you’re going to be forced to be more creative, or you’re going to be forced to investigate ingredients that you never thought you’d cook with. And as a result, I think it’s actually kind of an expansion of your culinary capacities to cook plant-based.”
Shane Witters Hicks, Escoffier Graduate, Private Chef/Educator & Plant Based Enthusiast

Whether you want to try your hand at working in a vegan kitchen, or you want to start your own plant-based food truck, a formal culinary education can help prepare you for the real world. Auguste Escoffier School of Culinary Arts offers a variety of culinary programs, with tracks tailored to your interests and needs — including ones entirely focused on preparing plant-based foods.

Plus, during your time as a culinary student, you’ll undertake an industry externship that can give you hands-on experience in a professional kitchen environment.

And if you’re concerned that you’ll need to give up your own plant-based diet in order to attend culinary school, you can rest assured that this isn’t the case. Vegans and vegetarians will find plenty of like-minded company at Escoffier and program offerings that can suit your lifestyle.

Enjoyed this article? Check out these ones next:

What Exactly Is a Plant-Based Diet and Is It Right For You?