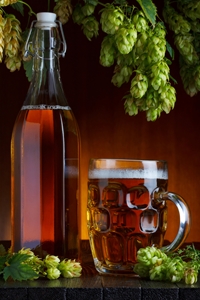 Many local Austin favorites were awarded the top prize at the 2014 Good Food Awards in San Francisco. The competition highlighted the nation’s best in such categories as beer, charcuterie, cheese, preserves, pickles and chocolate. Five Austin brands were awarded in the categories of beer, pickles and preserves.

Independence Brewing Company opened in 2004 off Todd Lane in South Austin. The Independence Pale is a hoppy, golden pale ale with a marked citrus aroma and grapefruity flavor.

Jester King Brewery was awarded for two of their unique brews. Its Atrial Rubicite is a barrel-aged sour beer that is refermented with raspberries, giving the beer a fruity dryness. The RU55 is a barrel-aged sour red ale which, like all Jester King’s beers, is fermented using the naturally occurring yeast and bacteria found in the air at the company’s farmhouse brewery.

Pickles
Both Confituras and Pogue Mahone took home prizes for their pickled blueberries and Dill and Garlic pickles, respectively.

Confituras, headquartered at 1208 W 4th street, prides itself on small-batch, locally sourced jams and jellies. The pickled blueberries add a nice punch of sweet-tart flavor to any dish.

Pogue Mahone pickles are a farmer’s market standby in Austin. Started by Sam Addison, the business features spicy pickle options such as Jalapeno Mint, Ginger Habanero and Serrano Lime. However, it is the classic Dill and Garlic that took home the Good Food prize this year.

Preserves
The only Austin winner in the preserves category was the Jelly Queens’ Blood Orange Lavender marmalade. The company, started by MasterChef alumna Donna Collins, produces unique handcrafted jams and jellies as well as chocolate sauces and spice mixtures.

All these stellar food products coming from the Austin area lend great credence to the region’s growing reputation as a foodie capital.