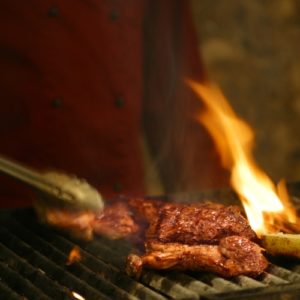 Korean BBQ is big across much of Austin.

It’s sort of a given that barbecue is a huge part of the American culinary tradition. Whether it’s pulled pork or short ribs, smoked meat is as much an American tradition as apple pie. Yet we’re not the only culture with a definite appreciation for this cooking method. Case in point: Korean barbecue. Though the meat is similar – mainly chicken, pork and beef – Korean barbecue differs from standard American barbecue in the marinades used and the addition of ingredients like onions and cucumbers. In recent years, this tradition has made its way into the U.S., including Texas, where Austin culinary graduates have helped introduce a whole new population to these tasty barbecue dishes. Here are just some of the restaurants Boulder to find truly authentic Korean barbecue:

1. Chi’lantro BBQ: Across a handful of storefronts – not to mention a food truck – Chi’lantro takes traditional Korean barbecue recipes and methods and gives them unique, America-style spins. That includes K-Pops, chicken wings baked with either spicy gangnam sauce or or sweet honey butter, and served with an extra spicy dipping sauce. There are also a number of rice bowls – featuring grilled corn, kimchi, garden vegetables and a fried egg – alongside either marinated tofu, spicy pork, soy glazed chicken and ribeye bulgogi, which is grilled marinated beef. Perhaps the biggest draw of Chi’lantro, though, is the kimchi fries, in which traditional fries are tossed with a choice of emat, onions, Sriracha, Monterey Jack cheese and a magic spice sauce.

2. Korean Grill: On the one hand, a name like Korean Grill doesn’t have quite the sense of excitement as some other local Korean barbecue spots. Yet perhaps the name is perfect because the air of simplicity helps to reflect just how traditional the staff approaches Korean barbecue as a whole. That fundamental style begins with appetiziers like shrimp tempura pancakes made with mixed veggies and kimchi, gyoza – a kind of dumpling similar to pierogis – and even seafood pancakes. Though Korean Grill has plenty of bowls with smokey beef, chicken and pork, perhaps it might be best known for its number of stews. That includes Jjigae – made with tofu, pork and kimchi – a medley of seafood and tofu, and Doganitang, which is made with beef bone broth.

3. Korea House: Similar in many ways to the aforementioned Korean Grill, the nearby Korea House takes a decidedly forward approach to many Korean favorites. What seems to make this local eatery really stand out, though, is the sheer number of dishes it offers, with the menu jam-packed with traditional offerings. In fact, some of these dishes can’t be found at many other local barbecue spots. That includes items like ojinga twigim, or deep-fried squid covered in soy sauce, and jangban kuksoo, or veggies and buckwheat served in a custom hot sauce. Korea House also has a wide array of steak dishes – including marinated beef and spicy chicken – alongside fish like yellow corvina, silver hair and flounder.

4. Cho Sun Korean BBQ: Just as much as it is about eating, Korean barbecue is also about the sights and smells of the actual food. This is something the staff at Cho Sun are keenly aware of as they present a rather unique take on Korean dishes. Some barbecue offerings include several varieties of beef short ribs, bulgogi marinated in a housemade soy sauce, hyumit gui – or cow’s tongue – and pork belly with red chili sauce. Or, grab a friend and share one of the hot stews, like the beef intestines of gopchang jeongol or the medley of beef and octopus called bul nack jeon gol. The restaurant also has a number of Korean drinks, like green and jasmine tea.