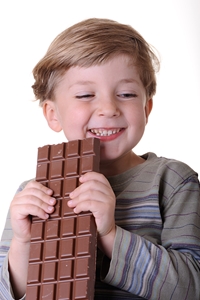 The Hershey Company, the iconic confectioner that has been bringing sweet treats to the world for more than a century, recently announced a multi-year partnership with the company 3D Systems. Together, they will develop a 3-D printer that could produce chocolates and other candies.

The intent of the collaboration is primarily twofold. Hershey’s hopes to find new ways to produce and distribute its products, while 3D Systems sees this as an opportunity to promote the use of 3-D printing in different areas. As food production and distribution continues to evolve in the coming years, it will be very interesting to see how big of a role 3-D printing will play in those processes.

How the printer would work
The chocolate 3-D printer is still years from market, but 3D systems unveiled two early versions at the recent Consumer Electronics Show in Las Vegas. The ChefJet and ChefJet Pro, both of which are made of edible sugar and chocolate, drew a lot of attention at the show. The basic version can only print in one color, and is expected to be sold for $5,000. The Pro version can print in multiple colors, and could have a ticket price in the $10,000 range.

While those prices might be well beyond the purchasing power of most consumers, they are early versions and the companies intend to eventually make the technology affordable to the average buyer. Currently, the printers can produce complex structures in a wide range of sizes up to 8-by-10-by-14 inches, printing at a speed of 1 inch per hour.

3-D printing and the future of food production
While printing chocolate candy may not be what most people envisioned when they predicted a future where 3-D printers can help replace traditional, and often environmentally harmful, ways of producing food, it could be an early step in making that hope a reality. The collaboration between these two companies represents the kind of investment on the part of private business that often drives innovation, which should be beneficial to the future of 3-D printing and food production.

This could also become an exciting opportunity in the future for people who have graduated from culinary school or who have taken pastry classes. Creative chefs are always looking for new ways to source, prepare and present their dishes, and 3-D printing could become yet another weapon in their arsenal as the technology gets worked out and these products become a more common part of the modern kitchen.