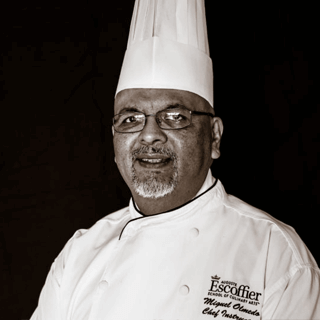 Chef Miguel competed and won several awards in the American Culinary Federation-sponsored food shows, prepared and executed banquets of up to 8,000 people, and managed various stations from the Disneyland Hotel in Anaheim to the New York Hilton and Towers restaurants. His fried avocado appetizer and baby back ribs recipe with homemade BBQ sauce have gained critical acclaim.

His culinary career began in 1984 aboard the legendary Queen Mary Hotel, where he received training in the Classical French cooking style and progressed within the Pacific Rim cuisine.

Having served as executive chef and sous chef for various establishments offering operational support for large resort kitchens, he brings a wealth of experience and talent to Escoffier. Chef Miguel’s cooking is influenced by transcontinental experiences in California, New York, Texas, Missouri, and Oklahoma.

His endless creativity and passion for food create an outstanding blend of flavors sure to delight and enhance students’ learning experience. I did not know anything about bbq after I moved to Texas, so I educated myself on BBQ and received this accolade a couple of years later. Riding my bicycle and walking the hike and bike trails with my dog.