For some people, it’s not a complete meal without a glass (or two) of wine. Be it Pinot Grigio or a Sauvignon Blanc, any culinary school student learns how to pair wine with dishes, from classic Italian pasta to short ribs and brisket. Of course, as a chef, there are several considerations when buying and serving wine, everything from the temperature to the benefits of cork vs. screw caps.

If you or your patrons are more into beer, perhaps because it’s less complicated, there are just as many considerations for selecting that perfect brew. Here are five tips for becoming a beer expert in no time flat: 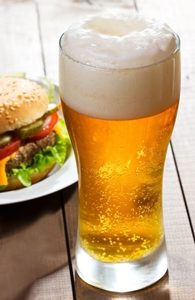 1. Don’t overthink it
Chef Adam Dulye is the culinary consultant for the Brewers Association. In an interview with CraftBeer.com, he said that it’s important to remember your feelings when picking out beer. That is, your opinions about the beer are just as important as pairings. For instance, while oysters are best paired with a hearty stout, it’s OK to experiment with beer options if you’re so inclined. Dulye suggested that all chefs take the time to experiment with pairings, and to be excited when trying out various combinations.

2. Establish a foundation
Even as you experiment, it’s still important to keep the rules of beer pairing in mind. Foodservice provider Pate Dawson explained that many of the rules of wine also apply to beer. For instance, bitter foods will almost always call for an equally bitter beer (Dawson mentioned the example of an IPA with endive salad). By having agreeable flavor panels, you’re making the entire meal one cohesive experience. Spicy dishes, meanwhile, need a beer that’s more crisp and clean. Porters are generally best with smoky flavors (think barbecue).

3. Beer can be sweet
Some people think that beer is just to be served with steak or ribs. Just as there are dessert wines, so too can beer be paired with many sweet treats. Nicole Illa, who was executive pastry chef at the Grand Hyatt Goa, told Buurp that she uses beer in a few different desserts. That includes serving apple or cherry pie with a Belgian Hoegaarden (the orange peels enhance the sweet flavors) and using beer to enhance her meringue batter. A lot of different beers work well with desserts, and in this particular instance, it’s important to experiment and keep an open mind. 4. Never overdo it
As Berry Bros. & Rudd pointed out, a great food-wine pairing should have balance, with neither element overpowering the other. Restaurant Hospitality agreed that the same follows for beer. A great beer choice will never overpower the actual dish, and instead will have similar or agreeable flavors. If you have an incredibly strong beer, one with a higher alcohol content or crazy flavors, that is going to ruin the meal itself. To make sure you’ve achieved that balance, you may want to opt for light ales and mild lagers, which don’t have nearly as intense flavors as, say, a stout.

5. Keep it local
If you’re ever unsure about what beers to pair with what dishes, Cooking Light suggested one especially handy tip: Match the food and the beer by country. So, if you’re whipping up some khao phat (Thai fried rice), choose a tasty Thai beer like Phuket or Singha. Or, if you’re about to serve up some ceviche, go for classic Mexican beers like Pacifico or Montejo. The logic is that because they originate from the same culture, they may share the same or complimentary flavors. If you’re ever in doubt, though, just remember almost any beer pairs well with spicy, smoky or vinegary flavors.