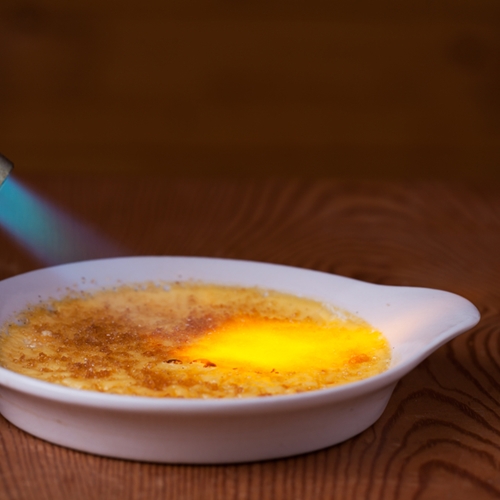 The blowtorch has long been used to achieve that perfect caramelized crust on top of a creme brulee. However, the tiny open flame has many more uses beyond that one sweet dessert. Now that more and more chefs are making use of the nifty gadget in their kitchens, it is time to highlight some of the many different dishes that can benefit from a little blowtorch action.

Salmon sashimi
Use your blowtorch to just barely singe the top of your salmon sashimi. The result is a more complex texture and flavor, with the cooked outer layer giving way to tender flesh underneath. A bit of flame also draws the flavorful oils out of the meat and superheats them, resulting in a bit of a smoky flavor.

Skillet pizza
You can make a fine pizza without firing up the wood-burning oven. Simply use a skillet to cook the pizza from the bottom and a blowtorch to heat it up from the top. The torch will brown the crust, roast your veggies, and melt your cheese all while giving you ultimate control over the whole process.

Peeled tomatoes
Sometimes a blowtorch is more effective prepping food rather than finishing it off. Use the concentrated heat of the torch’s flame to singe the peel off of tomatoes in a jiffy. The process is much easier than the traditional route of scoring, boiling, icing and peeling that preparing fresh tomatoes usually entails.

Steak in a jiffy
Next time you want to prepare a nice, juicy steak for yourself, skip the tedious defrosting step and use a blowtorch to take the meat straight from the freezer to the oven. With a blowtorch, you can give the steak a nice, crispy exterior while it is still frozen. Then, pop it in a 200-degree oven and wait an hour. Pull it out and you will have yourself a perfectly cooked-through steak with a nice, seared exterior.