After finally figuring out where all the equipment in Kitchen Six lives, the sixth month of culinary school saw some interesting and difficult tasks.  The transition from France to Spain to Italy went much more smoothly than I expected, and the class continued congealing into a unified unit that will come in handy during our culmination dinner at the end of the final block.  I also perfected my baguette technique, but more on that later! 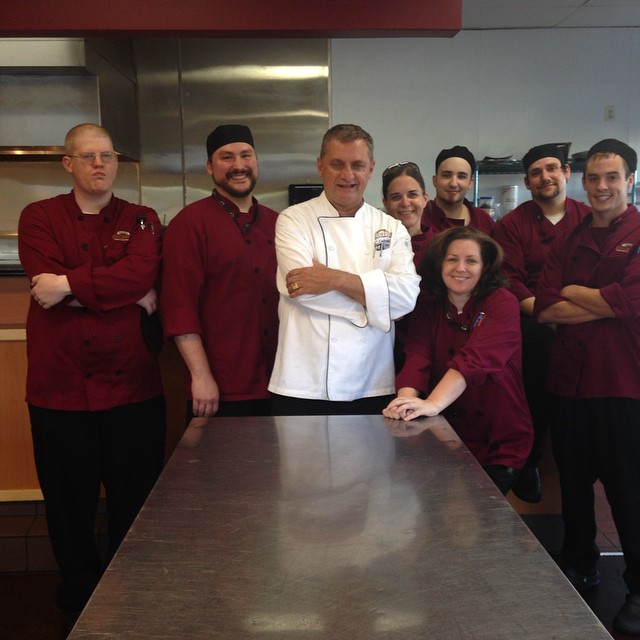 This week saw us making some of my favorite dishes of all time, including French Onion Soup (which was actually brought to France from Italy by Catherine de Medici) and cassoulet.  You might remember from my interview with Chef Kelly that cassoulet is rock star, and I highly recommend giving it a try if you have a free Sunday afternoon.  From here, we got to experience another day of wine academy, learning about Spanish, New Zealand, and Argentinian wine.  We finished the week out with a practical exam on both beurre blanc and beurre fondue, which I can attest is much easier than I originally expected.  All in all, it was a pretty solid week.

Having left France behind, I’ll admit I didn’t know very much about Spanish cuisine beyond empanadas going into this week.  I was surprised at how much Middle Eastern influence there is in Spanish cooking (which, considering the Moorish occupation that lasted nearly half a millennium, should’ve been more obvious.)  My classmates started really shining when it came to desserts, with Zach making some amazing mango sorbet out of a few under ripe mangos, and Benn absolutely killing some Pistachio ice cream with a port wine reduction sitting in a pool of Sabayon.  The week ended on as high a note as possible, with a sampling of Italian wines that wasn’t soured by a written exam on everything we’d learned in the five days of wine academy.  Another solid week, I learned a lot.

This week, we transitioned into Italian cuisine, and while I did learn a lot about the techniques associated with this style of food, the greatest discovery was a BBC original show  Chef JC introduced us to called “Two Greed Italians.”  They tour all twenty regions of Italy with the gusto you’d expect of such a wonderful part of the world, and I highly recommend it if you like cooking/travel shows.  This week ended with a practical exam on risotto, but I’ll admit I had an unfair advantage on this test, as my wife Tressa makes some amazing risotto, and I borrowed her recipe for the exam.

With a final looming at the end of the week and some headway made in finding an externship, this week was a little more stressful than your average week at Escoffier.  We focused primarily on Southern Italy and pasta production, as well as various sauces involved.  This was the point where I finally figured out the best way to make baguettes—they’ve been pretty good up to this point, but for whatever reason, I really nailed it on Thursday for the Bruschetta I was tasked with.  My final consisted of more bruschetta (my country-style loaf didn’t turn out as well, but it was alright) and fettuccine alfredo with grilled shrimp and zucchini.  It wasn’t my best work, but considering I had to wrestle with a number of setbacks, it turned out fairly well.

I’ll be completely honest, between school and my numerous writing gigs, fatigue is starting to set in.  Luckily, both Chef Jean-Claude’s passion for cooking and the humor he brings to the classroom kept me going and has me motivated to finish out the last month and a half at a sprint instead of a limp.  We’re moving on to Chef Eric and the Farm-to-Table block of classes, and I’m excited to learn about food production and spend some time with my hands in the dirt.  Between that and an upcoming job interview, October promises to be an exciting month!