The Holiday Season is a weird time for a lot of people. Seeming to grow every year (apparently starting on Halloween now), the Holidays are becoming an unstoppable juggernaut that is consuming the rest of the calendar and relegating some of our other holiday favorites (Halloween and Thanksgiving) to mere footnotes.  Not only that, but the list of Holiday chores seems to grow every year—baking cookies, shopping (or, Santa forbid, producing hand-made presents), coordinating family get-togethers, traversing security and airport madness…we can’t catch a break. Many get upset at the very idea of calling it “the Holiday Season,” despite the fact that solstice celebrations have been around since humanity first encountered winter. Many cynics will tell you that the Holidays depress people, leading to a spike in suicides (which is completely false). More cynics will tell you it’s a commercialist cash grab, convincing people to go out and spend spend SPEND! (not necessarily a bad thing, considering many businesses lean very heavily on their Christmas earnings to get them through the slow times of the year).

But, to paraphrase A Charlie Brown Christmas, what is the Holiday Season really all about?  I don’t think I’m qualified to answer that question for every person worldwide, but AESCA provided me with a pretty awesome example just last week.

I was catering an event at the school on the 22nd, of which I had very few details.  I knew that I was cooking for somewhere around 50 people, and that I was making a salad, two mains, and a dessert.  Chef Graham gave me a thorough rundown of the event, but let me be frank:  during the holidays, my brain can only hold so many details, so everything but the main facts just kind of leaked out of my ears. To be completely honest, I thought of it as “one more thing” on a list of stuff I had to get done in the lead-up to the end of the year.  I wasn’t looking forward to it and I wasn’t dreading it—it was just a line-item that had an empty box next to it, and I would X out that box and move on.  The work started on Friday after a full day at the office, resulting in a nearly 20-hour workday that left me drained and ready for a brew and a nap.  It continued on to Saturday and Sunday, resulting in butter cake, lemon curd, and Chantilly cream for the trifle that was to be my dessert.  By Sunday night, with a five hour flight looming on the horizon, I was ready to crawl under the covers with my eyes closed until all this Holiday madness blew over.

When I showed up on Monday to do my finishing work, I came to find out the event was more than your average homecook class.  The school was baking 100 dozen cookies to donate to Boulder Mental Health Partners.  Not content to simply give away sugary goodness, the school was also hosting a number of local children and their families, who had a blast decorating the cookies and having their picture taken with Santa. So I was volunteering to feed volunteers who were giving up their free time to bake for a local charity AND for local families, all in the name of Holiday cheer and helping a good cause.  At nine in the morning, this was my Grinch moment—my heart grew three sizes.  I couldn’t help but grin as I put the finishing touches on my beef stroganoff, chicken paprikash, and roast vegetable salad, and when some of the volunteers helped put the final product together for me, we were all suddenly united in Holiday cheer that was both energizing and renewing.  (I should note that the product I used for this event was donated by the school.)

I won’t go so far as to say that charity is what the Holidays are all about, but taking part in this event helped flip my attitude from “I can’t wait until this is over!” to simply, “I can’t wait!” It helped me recapture some of the wonder I used to feel lying in bed waiting for Santa when I was a kid. Is it selfish to say that a little charity work makes you feel better?  Sure, if you want to be cynical about it.  But since when does charity mean you have to suffer?  There were so many smiling faces on the 22nd that it’s hard to imagine any negative results from the event.

Kudos to the staff at the Auguste Escoffier School of Culinary Arts in Boulder—it’s not easy to convert a tired cynic in the grips of the stress brought about by a new job AND the busiest time of the year, but the event really saved the Season for me.  I can’t wait to take part in something similar next year! 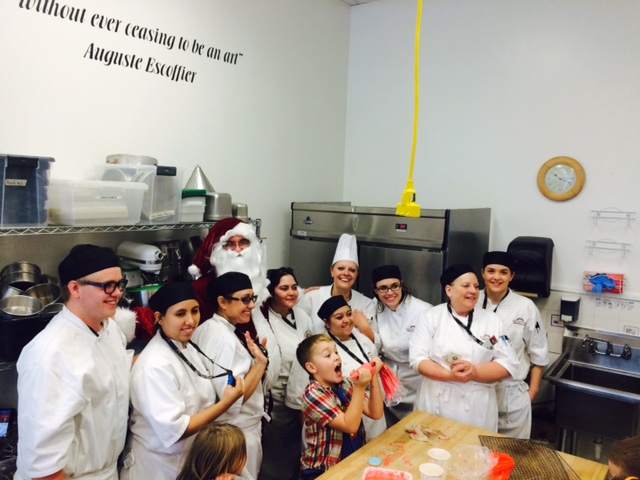