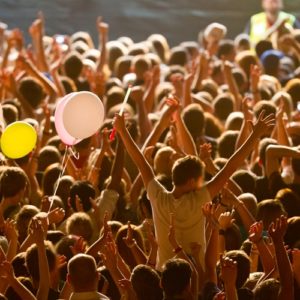 Fall is already flying by so fast with the second half of Austin City Limits wrapping up this past weekend. Drake wooed all of the ladies, Shia LaBeouf got arrested again, yadda yadda. We know what the Austin culinary arts students want to know about. Let’s get to the food. What were festival-goers favorite Austin-area vendors?

Best Drinks
JuiceLand: JuiceLand opened in Austin in 2001. It offers natural, healthy juices and smoothies made of fruits and vegetables, and even offer juice cleanse packages. At ACL JuiceLand kept it simple, selling a fruit punch and a green drink. Luckily, there are a dozen locations in the Austin area and one in Brooklyn so you can try everything else!

Best Barbecue
Salt Lick Bar-B-Que: Owner Scott Roberts helped his father start Salt Lick Bar-B-Que as a small family-run barbecue stand in 1967 and continues to serve recipes that have been in the Roberts family for over a century. If you liked the pork, sausage, beef or nachos you tried at ACL, check out their cash-only, BYOB location in Driftwood.

Best Mexican
Freebirds World Burrito: Freebirds has been an Austin staple for almost 20 years, using fresh ingredients and making its salsas in house. At ACL, the booth offered a barbecue chicken burrito, a steak tomatillo burrito, and a vegan burrito filled with tempeh, squash and zucchini. Get on Freebirds’ level, Chipotle.

Best Dessert
Skull & Cakebones: Skull & Cakebones prides itself in being Austin’s first never artificial, non-GMO, locally sourced craft bakery. All of the dishes are vegan, but the bakers are sure not to compromise flavor while cutting out animal products. If you tried and loved the Affogato Cakewich or whoopie pies featured at their ACL booth, Skull & Cakebones confectioneries are sold all over Austin.

Wild Card
Frank: Frank’s offered a chili cheese dog, a grilled bratwust sammie and waffle fries (with or without queso) at ACL, but the location at 4th and Colorado’s menu consists of more hot dog and sausage options than you could even imagine. Alligator sausage? Got it. Kangaroo sausage? Check. A hot dog with macaroni and cheese on it? You betcha.