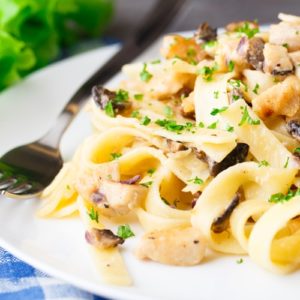 Chocolate can make a fantastic addition to pasta dishes.

For true chocolate lovers, a slice of cake or piece of candy after dinner just isn’t enough. They want that delicious, comforting flavor as a part of the main course. Washington, D.C.’s WTOP radio news noted that in 2015 chocolate was a common ingredient in dishes served at the James Beard Foundation’s prestigious Beard House, indicating a rise in popularity among elite chefs and savvy diners.

Many chefs and home cooks have been exploring the possibilities of incorporating subtle notes of sweetness or the more complex flavors of darker chocolate varieties into savory dishes. Those enrolled in culinary arts programs should take note of this trend and consider how they might find uses for the much-loved ingredient in their own recipes. Chocolate has an often forgotten history and enormous potential as an understated ingredient rather than a bold after-dinner indulgence:

Cultural traditions
Though it may seem novel to many American diners, using chocolate as an ingredient in savory foods is far from a new idea. Today’s chefs are building upon cooking techniques that, like the practices of fermenting, drying and roasting cacao, go back thousands of year in Central American history.

According to The Field Museum, the culinary use of cacao is at least as old as the Mayan Classic period of 250-900 C.E., though it was usually as a beverage. Drinking chocolate was a major part of Mayan life and was later adopted by the Aztecs who took control of much of the region. The Aztecs even used cacao seeds as currency.

In traditional Mexican cooking, chocolate is often included in mole sauces, such as mole poblano. As Pati’s Mexican Table explained, cooks add the chocolate late in the preparation of the mole, and it is not a dominant flavor. Rather, the ingredient serves to add further complexity to the essential combination of chili peppers while moderating their heat. Historically, the sauce was usually poured over boiled turkey or chicken, but it’s also a great for enchiladas or empanadas.

Chocolate holds a significant place in Italian cuisine as well, stretching back to when cacao was first introduced in Europe in the 16th century. Food historian Francine Segan wrote that dark chocolate’s intriguing nuances made it an excellent choice as a topping for pasta or incorporated into ravioli fillings. She spoke to Turin chef Ricardo Ferrero about the ingredient’s versatility for Italian cooking. New ways of having chocolate for dinner
Today’s chefs have made chocolate a delightful and attention-grabbing part of a wide variety of entrees. Meals that emphasize the ingredient throughout every course are especially popular choices for romantic Valentine’s Day dinners, as The Daily Meal suggested. Chocolate expert and author Eagranie Yuh recommended including unsweetened chocolate or cocoa powder in savory dishes that are based in tomatoes and undergo lengthy cook times, like chili or braises.

Some chefs, however, continue to push the boundaries of how chocolate can be used in savory foods. Bon Appetit reported on an experimental dinner in Portland, Ore., hosted by Alma Chocolate. Chef Jason French of the restaurant Ned Ludd prepared a menu that featured various forms of the ingredient in every course. French topped the leek and parsnip soup with a cocoa brioche crouton, garnished ham with cacao nibs and grated dark chocolate over roasted quail.

Clearly, those who think of chocolate as a food only for dessert are missing out on countless possibilities. Whether sweetened or bitter, chocolate is a highly adaptable ingredient that can accent your dishes and get your food noticed by its many devotees.