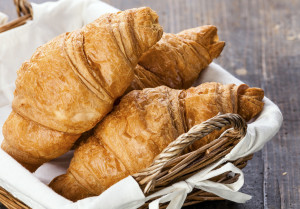 A portion of Texas culinary school is devoted to the buttery, flaky goodness of pastries. These tasty baked goods come in many sizes and shapes and are eaten all over the world. Some people like them for breakfast, and others for dessert. Here are four types of pastries you should know:

Croissant
You don’t have to go to France to become familiar with this light pastry. Shaped like a horseshoe, croissants are native to Vienna, Austria, according to La Gourmandise, a bakery in La Rochelle, France. In 1683, Austria was under siege by the Turkish Empire. The bakers in Vienna often worked underground and heard the Turks digging tunnels. They reported the intruders to their army, who attacked. The Turks retreated and the bread-like pastries were made in the shape of the crescent moon because of its presence on the Turkish flag. It wasn’t until 1920 when croissants became widely served and eaten in France. Not all of them are in the same shape – often chocolate varieties are like a miniature loaf of bread, lacking the moon shape of the original kind.

Brioche
Brioche is a delicious sweet bread. It is often referred to as “puffy” as it is not dense like a quick bread, but instead is airy. The pastry can be plain and lightly sweetened or even made in savory varieties. Some bakers add spinach, red pepper and even an entire egg to the middle. The origins of brioche are not fully known. It may have come from the Romans or possibly French individuals living near Normandy. Brioche is used to make a tasty French toast in many a French restaurant. The phrase “Let them eat cake,” was not, in fact, referring to brioche. It is so buttery and sweet that it can be easily compared to the sugary goodness of cake and was simply mistranslated from the original phrase.

Danish
Danishes are like a combination of a croissant and a brioche. The dough for these delicious pastries is “laminated,” meaning it includes yeast and butter and is layered. To make it, the dough is repeatedly folded, which forms the 27 layers required for the treat to be considered a true Danish. Inside of the tasty bread is Remonce, a filling commonly made of nuts, sugar and or fruit. Apple, marzipan, brown sugar and cinnamon are commonly found inside of a Danish, and it may take many shapes. Some are long and others are called “bear claws.” Some bakers even fold them into pretzel shapes. All are lightly drizzled with a sugary frosting and can be eaten at breakfast, for dessert or at any other time of day.

Fillo, Filo or Phyllo
This type of dough has several spellings, but is always pronounced fy-lo. Similar to strudel dough, it is a layered bread dough. It is made entirely of flour and water and doesn’t have a lot of taste in and of itself. Pastry chefs add fruits, herbs and nuts to it for a sweet dessert flavor. Honey, butter and powdered sugar may also be dusted atop the dough. Many a fruit tar is made with phyllo dough as it holds a cup shape well and can take on multiple fruits without breaking. The dough’s name is Greek, but the technique used to make it is actually from Istanbul, where it was created during the Ottoman reign. Baklava is made with the dough and layers of chopped nuts and dried fruits. It is often eaten at holiday celebrations. Phyllo dough can also be used in savory dishes, like with spinach and goat cheese layered in between the bread, or to make napoleons with mascarpone cheese, strawberries, balsamic vinegar and port.