Voodoo Doughnuts is known for their eclectic flavors and names.

The world-famous Voodoo Doughnuts finally officially opened at 212 E. Sixth St. in Austin over Halloween weekend, taking over the old Bourbon Girl location near The Parish, according to Austin 360. With a ribbon cutting ceremony and live music by Hick Olds, Austinites rejoiced that they’ll now be able to get funky donuts 24 hours a day.

At the beginning of October, the Austin location had a “soft opening,” selling a limited amount of donuts at various hours in order to test its operations and train its employees. People were instructed to stay tuned to Voodoo Doughnut’s social media accounts to keep up to date as to when the location would be open.

The Austin location is Voodoo Doughnut’s sixth shop . With four locations in Oregon and one in Colorado, Voodoo Doughnut is planning on expanding internationally, opening new stores in Japan and Taiwan. 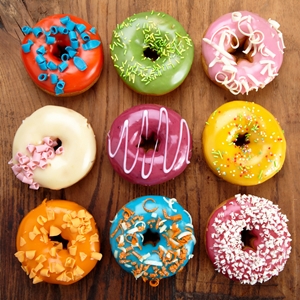 About Voodoo Doughnuts
Established in 2003 by Tres Shannon and Kenneth “Cat Daddy” Pogson, Voodoo Doughnut is truly one of a kind. Having been featured on No Reservations, Doughnut Paradise, Attack of the Show! and Globe Trekker, it’s become a bit of a tourist attraction.

Known for its eclectic donut ingredients and names, you can get a donut topped with all kinds of cereals, or filled with Tang. If those don’t appeal to you, order yourself a Rapper’s Delight, which comes with three donuts called the Marshall Mathers, the Old Dirty Bastard and a Maple Blazer Blunt.

You can try to eat the giant donut that’s equal to six normal sized ones, known as the Tex-Ass Challenge. If you can eat it in less than 80 seconds you can get your money back. Or if you’re up for a real challenge, you can even get legally married in all of their locations, complete with adorably decorated donut centerpieces.

In a partnership with Oregon’s Rogue Ales, Voodoo Donut flavored beers have also become a hit across the country. While Voodoo Doughnut doesn’t ship its delectable pastries, you can probably get your hands on one of their doughnut-inspired beers at your local liquor store or beer shop: