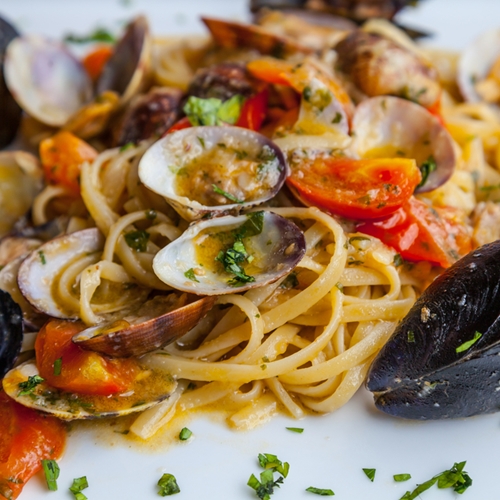 For many people, spaghetti is a go-to dish for a lazy weeknight. Boil some pasta and pair it with a simple sauce for a satisfying, if not very exciting, meal. If you’re making your way through culinary academy, however, you’re learning all the techniques you need to make spaghetti a much more interesting entree. Here are three ways you can step up those noodles:

Before you start cooking, soak the mollusks in a bowl of extra-salty water for half an hour. Remove the clams from the bowl, checking for sand at the bottom. Repeat the process until sand no longer shows up, which may take two or three tries, and get rid of any clams that are wide open and won’t close.

On a medium heat, saute three sliced cloves of garlic in extra-virgin olive oil with red pepper flakes for five minutes. Add the clams with a half cup of dry white wine and raise heat to high. As the clams open over the next five minutes, move them into a bowl.

Cook the pasta in salted water until it’s not quite al dente, and then move the spaghetti into the skillet. Add some of the cooking water to the wine mixture and cook on high, watching for the sauce to reduce. Throw in the meat from the clams and a tablespoon of butter to cook for another minute. Finish off the dish with some parsley and a little olive oil.

2. Marvelous mascarpone
Another topping that can change the way you look at your pasta is mascarpone. The Kitchn gave directions that combine the sweet, soft cheese with other distinctive flavors and textures. Begin by juicing and zesting a Meyer lemon.

Whisk the zest and juice together with mascarpone, grated nutmeg, salt and pepper. Cook the pasta until it’s al dente and drain, reserving some cooking water. Place the pasta back in the pot over a low heat with the sauce. Add spinach and a quarter cup of the pasta water. When the spinach cooks, mix in toasted, chopped hazelnuts.

3. Ramp up dinner
Ramps – small, green springtime vegetables with a garlic-like flavor – have become a popular choice for chefs in recent years. Mario Batali offered a simple way to incorporate this trendy produce into your spaghetti.

Cook the spaghetti until al dente while preparing the ramps by separating the white root ends from the leafy greens. Saute the root ends in extra-virgin olive oil. When they’re tender, add red chili flakes and salt, then the greens. Cook until the leaves wilt.

Drain the pasta and move into the pan. Toss the spaghetti in the sauce. Serve with olive oil and breadcrumbs.

For students pursuing a culinary arts certificate online, an ordinary bowl of spaghetti can be an invitation to get creative. Try these recipes and then make the dish your own by exploring different sauces and toppings.