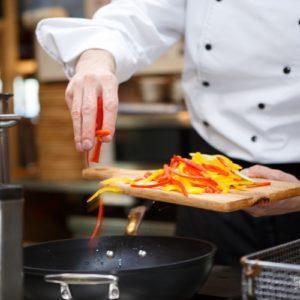 To dream up new dishes, or just to keep cooking, chefs have to find ways to bolster creativity.

Cooking in and of itself represents a certain dichotomy. On the one hand, preparing meals is a regimented process, one that involves precise measurements and preset allotments of time. Yet at the same time, cooking is very much done from the heart, and it’s an art form that involves the free-flowing exchange of creativity. During your time in a culinary arts program, you’ll master the mechanics of cooking, but where does the soul come from? Here are some tips for finding inspiration in the kitchen:

1. Don’t force it
When you are trying to think of some new dish to cook, it can be easy to force yourself into coming up with a set number of ideas. However, this kind of pressure can be bad for the creative process. Your best bet is to just let the creativity flow to you. There is an idea among many creative types called the shower effect. This suggests that you often do your best thinking when you least expect it, like during a walk, while eating lunch or, as you might have guessed, in the shower. There are, of course, certain times when you’ll be most creative, and it might not be when you expect it. According to a 2012 study published in the journal Thinking & Reasoning, morning people are most creative at night, while those who work better at night can expect inspiration to pop in the morning.

2. Take a look around
Cooking is as much about the taste as it is the visual presentation of a specific meal. Speaking with StarChefs, pastry chef Ron Mendoza said that he draws inspiration from architecture. Certain pieces, like the structures and angles of a skyscraper, may be a great way to help you think about the shapes of your own dish. Meanwhile, chef Boris Portnoy turns to visual art when he needs to find his muse. Again, colors and lines can be a great way to think about the final product of a meal; from there, you’re simply filling in the blanks with ingredients and the like. In fact, Portnoy is so inspired by art, he often sketches new dishes out beforehand. There are other benefits to drawing beyond establishing ideas. As the Wall Street Journal reported, several studies have found that drawing is a great way to improve both memory and focus.

3. Find a springboard
Cooking is very much an art, and just like painting or making music, it’s inspired by the work of those who have come before the artist. In fact, First We Eat spoke to a number of chefs who all draw inspiration from their own most memorable meals. For instance, Johnny Ray Zone wanted to create the same kind of emotional immediacy as he experienced upon visiting Prince’s Hot Chicken in Nashville, opening his own wing joint in Los Angeles. It’s not about recreating specific dishes or trying to find what is most popular and is guaranteed to sell. You want to find dishes that speak to you and use the resulting excitement to achieve similar goals. Another chef’s meal just may get you rethinking some ingredient or a specific culinary tradition.

4. Recognize your role
Grant Achatz is the head chef and owner of The Alinea Group, a chain of restaurants in Chicago. Speaking with CulinaryAgents, he said that there is a freedom to being a chef that you can’t find elsewhere.

“The restaurant industry is rare in that unlike other arts, you start over everyday,” he said. “You do not cut an album, take a photo, create a building, or paint a painting and it lives on for people to enjoy. Everyday we wake up and start from scratch, and everyday we have the opportunity to hit the home run or strike out.”

Let that unique approach fuel your efforts. If you have one bad day, no one will know about it if you follow it up with some appealing new dish. This sense of openness does away with so much of the stress of being a chef, and that in and of itself can be enough to get your creative juices surging. Just don’t forget that there are still deadlines and responsibility no matter where you fall on the kitchen line.