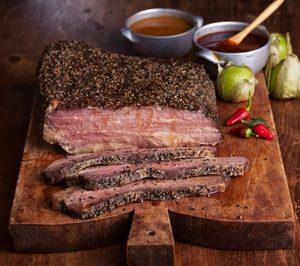 Famous for his barbecue, Texas-native Aaron Franklin will be sure to include it in the upcoming Austin festival lineup.

Every September since 2012, foodies in Oregon have looked forward to the giant food and drink festival Feast Portland. Tickets go on sale months in advance and people save up their appetites for the four-day affair. According to the official website, Feast takes pride in showcasing the energy, creativity and enthusiasm that’s driving America’s food revolution.

This is why Feast co-founder Mike Thelin has teamed up with pit master of Franklin Barbecue, Aaron Franklin, and James Moody of Transmission to bring the magic of Feast Portland to Austin, Texas in 2016. Austin culinary arts students will have a new festival to appreciate food.

Not much information has been released regarding the upcoming festival. The name and theme – though barbecue is a clear contender – are still under wraps while the three organizers work out details. They’re looking at a spring festival so that all of the talent they’re interested in who’s occupied with festivals all summer will be available. They’re hoping to be able to invite all of the chefs in person.

Why Austin?
Why is it assumed that a festival that’s successful in the Pacific Northwest will also be successful in Texas? In addition to the fact that Austin is moving its way up the foodie map. Franklin and Moody both hail from Texas, and Thelin sees many parallels between Portland and Austin.

“Our motivation is friendship, ” said Thelin to Texas Monthly. “We’re doing this in Austin because two of the three founders live there and because Austin, like Portland, is one of the epicenters of joyful eating … Eating there is about celebration, not pretense. I love that about both of our cities.”

The highlight of the year for Austin foodies is the Austin Food & Wine Festival. If this new festival is as well-received in Texas as it is in Oregon, Austin foodies will have another weekend to look forward to every year. Thelin insists that the festivals won’t be comparable, though. It will be a festival all of its own, unlike Portland Feast or the Austin Food & Wine Festival. They aren’t planning to encompass a region, like Feast Portland is famous for doing. They plan to pull together top talent in the city in a smaller, more DIY-setting. At the moment, they don’t plan to extend it outside of Austin.

“Our idea is to have an Austin festival that’s just awesome,” said Franklin to Austin 360. “We’re not building it with the intention to grow it.”