I’ve been kicking around the idea for this series for a long time. The plan is to discuss ways to stretch a food budget without sacrificing flavor, technique, or fun.  In formulating this idea, I gave myself a couple of parameters in order to avoid spending a ton or requiring too many hours in the kitchen.  Those parameters are:

1. Every meal must feed at least four people

2. Every meal must cost less than eight dollars (so it’s two dollars per person).

3.  Every meal must take less than 60 minutes of active kitchen time (for example, a roast may take five hours in the oven, but the prep only takes between 20 and 40 minutes. I can do laundry, play with my cats, watch TV etc. while the oven does the work.)  I don’t want anyone to say “I’m working two jobs.  I don’t have time for this!”

4.  Basic spices, dried herbs, etc, will not factor into cost (many people have basic pantry items).  If an exotic spice is required, I’ll factor that into cost, but not for things like dried oregano or salt (unless the recipe requires A LOT).

5.  Every meal must contain one protein, one vegetable, and one starch.  Fruit/dessert is optional.

6.  Every meal must be reasonably different, such that the people eating it don’t get tired of dinner.

So without further ado…

This set of three recipes is going to revolve around a 4.5 pound pork loin[i]broken down into roughly three equal parts.  The first recipe is going to be Asian-inspired pork and vegetable stir fry, the second is going to be a mushroom and spinach stuffed pork loin with a baked potato, and the third is going to be pulled pork on a crostini with sweet potato fries.

So first thing’s first, you want to set up your butchery station.  You’ll see below that I have 1./ a cutting board, 2./ a wet towel under the cutting board to prevent slipping, 3./ spare paper towels, 4./ butchery tools, including my chef’s knife, filet knife, and steel, 5./ anti-bacterial soap, 6/ a spare rag to wipe up spills, and 7./ a landing zone for my pork.  It’s not pictured, you’ll also want to have a sanitation plan in mind (we are working with pork).  For me, that’s anti-bacterial bleach wipes, which I use after cleaning up with the anti-bacterial soap.  If you don’t have those, you can mix a capful of bleach in a gallon of water for the same effect. Onto the cutting—using the knife you’re the most comfortable with, slice the pork roughly down the middle (no need for a ruler). Then slice roughly two inches from both ends.  This will give you two loins of roughly the same size, and two somewhat irregularly shaped ends. Place your loins in your landing zone and put them in the fridge.  (This is temporary—we want to control how long they sit out at room temperature.) Cube your ends into roughly ¾ inch pieces.  Again, you don’t need to get the ruler out, just keep them roughly uniform so they cook evenly.  Then toss these into a plastic bag with about 2 tablespoons of soy sauce, 2 tablespoons of white wine vinegar, and a half teaspoon of Chinese five spice, costing roughly 60 cents.[ii]  Squeeze all the air out of the bag and put it in your fridge. Next, take one of your loins from the fridge and trim the fat and any dark meat from it so that you have a roughly uniform log of white pork.  DO NOT throw away your trimmings–you need them for the pulled pork. Eventually, you’ll be poking a hole down the center of this loin and stuffing it, but for now you can put this in a sandwich bag and put it in the fridge. 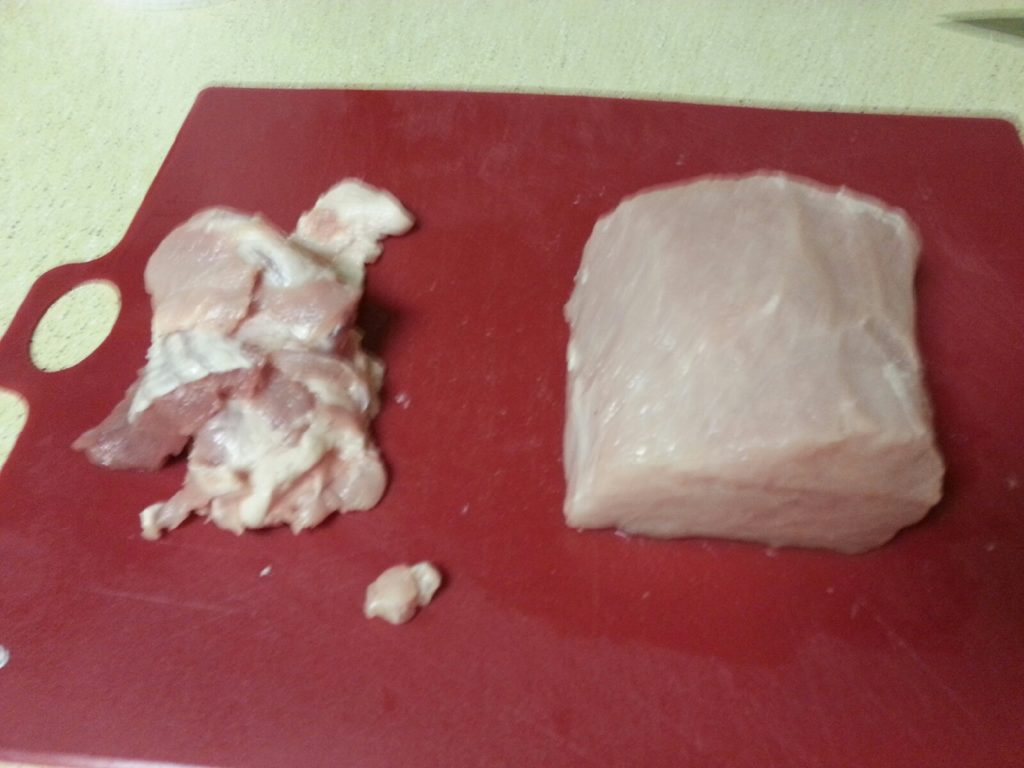 Finally, take your second pork loin and all your trimmings and put that in a plastic baggie along with 8 ounces of root beer and 4 ounces of white wine vinegar, costing about $1.20.[iii]  Squeeze the air out of that bag as well, and put it in your refrigerator. So yes, these three meals actually require four days of prep, but don’t let that trick you into thinking I forgot about my 60 minute parameter. In all, this first day took me about 15 minutes, but in the interests of not making people to rush, let’s call it 30–ten minutes per meal.  You could do it on the day of if you really wanted, but taking care of this on your day off will guarantee that the rest of your week is a easier, and who couldn’t use that?

And each meal still has 50 minutes of active kitchen time left.  Pretty good shape so far!  Next entry, we’ll be doing the pork stir fry!

[i] Bought on sale for $8.44.  If I wanted to be super careful with my costing, I should weigh out each cut, but in the interest of avoiding extra math and saving time, I’m just going to split this into thirds—each meal is using $2.81 worth of pork.

[iii] I sprung for a six pack of Henry Weinhard’s Root Beer, which is a little more expensive (but it’s one of my favorites).  It was on sale for 3.99, and there are 72 ounces in a six pack, averaging out to 5.5 cents per ounce.