Blog > World of Food & Drink > Spices and the age of exploration 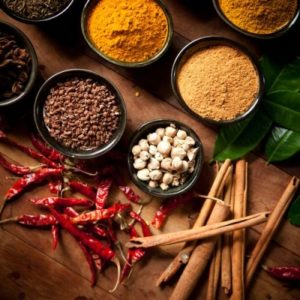 As a student of cooking courses, you may have a difficult time imagining your life without access to spices. You likely concoct dishes full of cardamom, cinnamon, turmeric and even salt, but these now common seasonings were once exotic, and in some cases, rare. The era was the 1400s. Spain and Portugal were two of the most powerful countries in Europe, though Venice (which was its own country during that era) wasn’t far behind. However, each nation held power for different reasons. Spain had military might, but Venice had control of trade routes to Asia. Merchants were able to barter for exotic and delicious spices, which they sold for a hefty price. Better still, all of Europe was clamoring for a taste of the East. In fact, spices dominated international trade at that time the way oil does today. Spain and Portugal didn’t want to rely on Venice and other nations along trade routes any longer, so they began to fund explorative efforts to find new roads to Asia.

Portugal sets sail
The age of exploration (or discovery) was fueled by many factors. New technologies made nautical navigation easier than ever, a few countries had the means to expand their empires, and the spice and silk trades were hotter than a blacksmith’s forge. Countries like Spain and Portugal could dip into the royal treasury to fund expeditions that would ideally create new trade routes and imperialize.

For Portugal, the decision to go ahead with exploration was a no-brainer. This country was the first to get on board with seeking new trade routes, as it were. Prince Henry the Navigator, son of Portugal’s king, subsidized research and preparation for discovery efforts. Perhaps the most famous and successful of Portugal’s explorers was Vasco da Gama. His crew set sail in the 1490s south toward the Cape of Good Hope in Africa. His ships rounded the cape and went north toward India. The voyage took two years, but da Gama returned laden with spices. His efforts and success only fueled Europe’s appetite for spices, which is still strong today.

Spain weighs anchor
Spain’s motivation for exploring into the unknown world was much less about culinary endeavors and more about building an empire. Christopher Columbus, Hernan Cortes and other Spanish explorers founded colonies and brought back spoils. The gold and silver these men carried home enriched Europe, allowing its people to improve their quality of life. For many, that meant purchasing spices and other luxury goods.

However, one explorer did seek spice routes on Spain’s coin: Ferdinand Magellan. The Portuguese explorer failed to get funding from his native country and went to the Spanish government instead. Spain decided to fund his expedition, which led him west toward what he called the Spice Islands. Sadly, Magellan never saw those shores. He was shot with an arrow and died during his journey. His crew, however, did return to Spain. In fact, 18 original crewmen sailed around the globe to the Moluccas and made it back home with plenty of spices.

Spices today
Now you can walk into any grocery store and pick up spices that used to require months (if not years) of travel to acquire. While gaining access to seasonings would have happened eventually, the age of exploration added the spices to the international culinary lexicon early on.