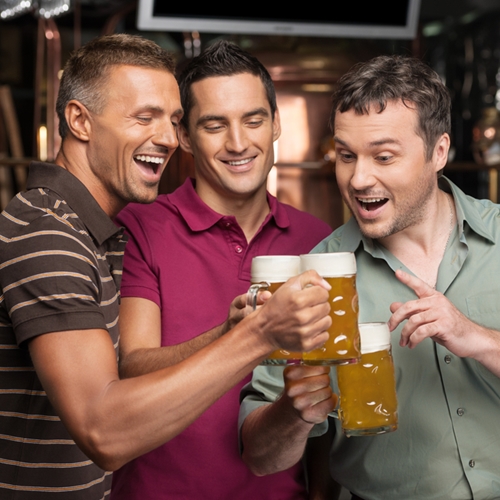 Their website banner boasts seven cartoon individuals of varying ages and styles, all mean mugging for the audience and holding a beer in their left hand. Underneath the beer drinkers reads “Geeks Who Drink – Join the revolution, Wiseass.” This quizzical clan is all about beer and knowledge, and of course, beer knowledge.

Geeks Who Drink
Geeks who Drink is based in Denver and hosts bar trivia in more than 300 eateries and bars in 25 states. The trivia is not your typical Trivial Pursuit questions that are super hard to answer and only fun for people with multiple degrees. The questions are multimedia and read off by an excited, passionate host. Trivia nights run about two hours and cover specialized topics like TV shows (think “Game of Thrones,” “Breaking Bad” and more), geography, science, tech, pop-culture and many more. Some questions even combine topics, with two part answers that require quiz players to know about totally unrelated topics. If you like Jeopardy you’d love this in-person trivia game. Most people play for fun and to do a little rabble rousing but there is a serious side. The Geek Bowl is held every year as a competition between top teams throughout the nation. Winners earn a monetary prize and a trophy of a golden beer bottle topped with a brain.

The players
Players come from near and far to fight through 70 questions covering an all-encompassing range of topics. The questions start easy at the beginning of the night and eventually make their way to tougher ones. There are no restrictions as to who can play, but teams are topped off at six players. Almost all of the venues are cover-free so this opportunity for some chaotic entertainment is technically free. It is recommended, however, that you eat and drink. You are in some of the coolest local establishments possible so it only makes sense. Plus, you can count trivia as part of your culinary quest so long as you try the food and maybe get something to sip on. There’s no need to call ahead or sign up, just show up at the allotted time with a hungry stomach and a seriously awesome team name. You can play to win gift certificates to the location or even free pints.

The establishments
According to Wired, pubs pay anywhere from $125 to $200 a week to have Geeks Who Drink quiz nights held at their establishment. In Colorado alone there are 16 places hosting a on Mondays. That’s just Monday! On any night besides Friday, you can find at least three locales hosting this awesome trivia opportunity. Stop by License No. 1 in Boulder on a Tuesday evening or visit Darcy’s Bistro and Pub if you’re in Denver on a Saturday. If you’re attending an Austin culinary arts program there are at least two spots on any day of the week except Friday to go test out your knowledge of architecture, botany and quidditch. Head to Warehouse Saloon for a rowdy round of Thursday trivia or off to Kick Butt Coffee for a Monday pick-me-up of caffeine and culture.