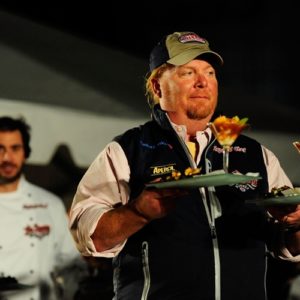 Famous chef, writer and television personality Mario Batali is bringing new focus to the young culinary movement in the United States. In a collaboration with OgilvyEntertainment, Batali has started the production company ccMF to create quality online content for an audience of millennials. Though the show does not seem to adhere to a specific time length or format, Batali seems focused on taking on the type of wide-scope food culture documentation that has been made by chefs such as Anthony Bourdain.

The High Road
Mario Batali’s new web series is available on Hulu under the title “The High Road with Mario Batali.” The show has the type of broad-spectrum mystique that could take the famous chef everywhere from a Texas culinary arts school to a boutique coffeehouse in Prague to a New York City food truck?. For the show, Batali has already adventured around New York City with George Stephanopoulos. Though the show is filmed in black and white, Batali still proudly dons the orange Crocs that he has made famous in the restaurant world. The lack of color gives nostalgic feeling to the show, adding to the minimalist documentary-style aesthetic.

The interesting thing about Batali’s show is that it seems to desire to be part of the creative process of foodie culture. Whereas most culinary television focuses on traveling to distant continents or showcasing long-time local staples, The High Road is focused on startups. He intends to serve more as a host and narrator as opposed to the show’s subject matter, and instead will direct the lens at YouTube stars, food bloggers and young up-and-coming chefs. It’s new food culture on a global level, examining how our gastronomic tendencies have shifted. Modern emphasis on farm-to-table coupled with increasing technological access to food programming has put the average home cook in a very unique position. Batali seems to be focusing on that esoteric angle, catering to a busy, youthful audience that wants to have access to content on a mobile, immediate basis.

This juxtaposition is what will likely make The High Road different from previous culinary programming. Batali is looking to produce material that is ingestible on the go. This allows Batali to focus on an issue such as global warming’s effect on food production in a way relevant to the culinary community. Culinary programming often strictly examines cooking, but Batali appears to be looking to go beyond that tradition.