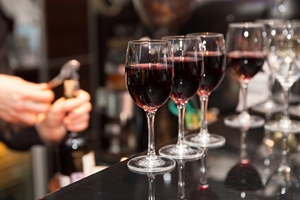 It’s hard to believe that Frasca Food & Wine, one of the most beloved restaurants in the Boulder culinary scene, has been open for 10 years. What’s even more astonishing is the transition that the establishment has undergone in that decade. What is now widely revered as haute culinary couture among Colorado residents was once merely another upstart restaurant, trying to open on a shoestring budget. In a recent interview with the Daily Camera, co-owner Lachlan Mackinnon-Patterson reflected on the restaurant’s humble beginnings. Speaking on how he and co-owner Bobby Stuckey were forced to do much of the interior construction themselves, he revealed that they ultimately opened without light switch covers on the walls.

“It was pretty scrappy,” Mackinnon-Patterson told the Daily Camera.

Still, as the saying goes, from small things big things one day come. That’s exactly the story of Frasca Food and Wine, which celebrated it’s decade anniversary with a special Quatro Piatti menu on offer from August 4-9. The menu, which featured favorite selections from guests of the restaurant, replaced the typical weekday wine dinner offered by Frasca and was prix fixe at $78.

Across their ten year run, Mackinnon-Patterson, Stuckey and the rest of the staff at Frasca have been recognized time and time again for their hard work and contributions to the restaurant industry. In 2008, Mackinnon-Patterson took home the James Beard Foundation’s Best Chef: Southwest Award. The restaurant as a whole was also honored by the James Beard Foundation in 2013 for its incredible sommeliers by winning the Outstanding Wine Program category.

Bobby Stuckey, the other half of Frasca, has not been without his own recognition, either. Stuckey has attracted an array of young sommeliers from across the country hoping to study under him. Several Frasca employees have even gone on to start their own successful restaurants.

While the anniversary menu has already passed, students pursuing culinary certificates should go and check out Frasca, even if only for a drink. It will help them visualize what it’s like to build a restaurant from scratch.