A deep appreciation for our food and where it comes from is critical for the conscientious chef. And what better way to earn respect for fresh produce than to grow it yourself?

At Auguste Escoffier School of Culinary Arts in Austin, Texas, the campus garden gives students a chance to dig into the earth and coax stubborn seeds into delicious ripe vegetables for use in their classes. Let’s explore the benefits of the garden and how it enhances the Escoffier experience for Austin culinary school students.

Dig into the Garden on Escoffier’s Austin Campus

Just outside the back door of Escoffier’s Austin campus, an urban garden flourishes. It’s fenced off to protect the delicate shoots and tender veggies from city-dwelling critters and Ratatouille. But the locals are welcome to wander the rows, while picnic tables provide an outdoor spot for students to eat lunch or study on nice days.

The campus garden is a student-driven project, with help from some faculty and a small maintenance crew. Students in the Farm to Table® block of their culinary programs do some of the work, and others volunteer to spend time weeding, watering, and harvesting.

For many of Escoffier’s culinary students, the campus garden is the first time that they’ve grown their own food. Working in the garden teaches them the joy of shepherding a carrot from seed to soil to soup, all under their own watchful eyes. “A lot of these students that come here have never had fresh vegetables. They’ve certainly never pulled something off of a vine. They don’t understand that a good tomato right off the vine is like candy.”
Robyn McArthur, Executive Chef at Escoffier’s Austin Campus

Escoffier Chef Instructor (now Executive Chef) Robyn McArthur was a champion of the garden from the beginning. When the Farm to Table® course was still being developed, she knew that an on-site garden would be invaluable to the students.

In fact, she may have been too ambitious! “The garden that we originally put out there was bigger than what we have now,” she says. “We scaled it back because we are always looking for ways to improve.”

In the Austin campus garden, plants are grown in raised beds, rather than sowing seeds directly in the ground. Raised beds usually have fewer weeds and better drainage. They also help protect the plants from accidentally being stepped on or kicked.

The raised beds in the campus garden have a clever, low-tech aquifer system that helps to keep the plants well-watered in Austin’s hot, dry climate. The beds are lined with plastic sheeting at the bottom, covered with a layer of river rocks, and then topped with soil. Each bed also has a PVC pipe at the end where students can insert a water hose and turn it on. Water fills the bottom of the bed, among the rocks. The soil above leeches the water from among the rocks, resulting in a slow watering from the bottom that makes for healthier plants with deeper roots.

The garden also has a small greenhouse where the team starts new seeds in recycled egg cartons. And there are composting bins, built by one of the first classes to ever work in the garden. These bins let the students recycle their scraps to turn them into a nutrient-rich humus to help with future growing seasons. 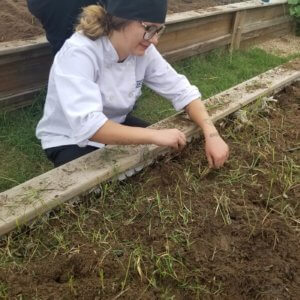 What Grows in Austin?

Austin gets plenty of sun. In fact, it’s sunny over 300 days per year! But it also has hot summer temperatures that can scorch delicate plants.

Some veggies that can’t stand up to the height of Central Texas summers can instead be planted early in spring, so that they’ll be ready to harvest before the heat reaches its peak. All other plants in the Austin garden work with the Texas climate, instead of against it. 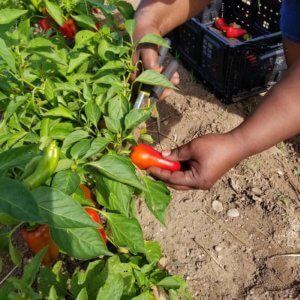 The produce is often used in class. And if a student goes out and works the garden, they can take some produce home, too.

“If you move somewhere new, look up the growing season and find out what grows best in the summer in that city. A lot of people don’t even realize that that’s a thing. They’re just so accustomed to finding anything and everything that they need at the grocery store. So if you are going to take a more sustainable approach, then you’re going to have to do a little homework.”
Robyn McArthur, Executive Chef at Escoffier’s Austin Campus

Farm to Table® at the Austin Garden

At Escoffier, culinary arts students will take part in the Farm to Table® Experience. Austin culinary school students will work on local farms one day per week and experience a lesson curated by the farmers. It could be a tutorial on crop rotation, or a session on ideal planting and harvesting times, or a lesson on how they get the food in the market. Then students will go out and harvest, or collect eggs, or do some canning, depending on the farm or maker and their needs.

Farm to Table® students also harvest the produce from the campus garden for use in their cooking projects. Or they’ll stock up the Escoffier store room, which is run by student workers. “They’re the go-getters,” says Chef Robyn. “They’ll come out early in the morning. They water everything, and then they do some harvesting and find out if there’s places in the classes where they can use it.”

“Students need to understand the process it takes to get an onion from the dirt all the way to your restaurant. Then they’re going to be less likely to waste and they’re going to support their local economies and local farmers.”
Robyn McArthur, Executive Chef at Escoffier’s Austin Campus

The Garden During the Pandemic

Gardening can teach us a host of lessons on resilience and flexibility. This has been more apparent than ever in the past year.

During the COVID-19 pandemic, the garden went into disrepair with no one to weed and care for it. Plus, Texas experienced a nearly unprecedented deep freeze in February 2021 that killed a great deal of local plant life. Recently, student workers and staff have started putting things back in order. They’ve cut back the grass, treated the weeds, and built some new beds. And they’ve found some surprises along the way. For instance, back when the garden was first started, the students planted asparagus that really took hold. “We had asparagus coming out of our ears,” Chef Robyn remembers. But after 18 months of neglect and the February freeze, she expected that it had all died.

“Our storeroom manager was just out there and he sent me a picture holding a handful of asparagus. He’s like, ‘Look what’s back.’ Anything that survived has just come back 10 times as strong.”

See What Else Awaits “Deep in the Heart of Texas”

Working in the garden is just one of the advantages that students enjoy on Escoffier’s Austin campus. There are also the chances to work with celebrity chefs, participate in local food festivals, and experience Austin’s vibrant food and restaurant scene.

Find out what else you can experience when you attend culinary school at Escoffier in Austin!

To learn more about Escoffier’s Austin campus, try these articles next: