For this installment of New Perspectives, I moved from the pastry side of the house to interview one of my Culinary Arts classmates, Alex McCall. Easily one of the most interesting (and somewhat intimidating, given her resume) people I’ve met in a long time. It’s been great getting to work with Alex over the past six months.

Tell me about yourself.
I’m originally French but have lived in America long enough to be totally ruined and useless. I am an exceedingly proud mother of five. Seven years ago I was an automotive journalist for Forbes, and did things like drive a drop-top Bentley Continental down 5th Avenue in New York City, took the Range Rover on the insane Consumer Reports offroad testing grounds, and flew down on a private jet to Terlingua, Texas to interview Carroll Shelby. Moved to Denver, and eventually gave up a lucrative and high-powered corporate career to go to culinary school because I’m crazy. I produce and host a popular cabaret show in Denver, and perform nationally as a burlesque dancer because I’m not crazy.

Why did you get into the Culinary Arts?
I grew up as the family cook in a poor family. Thankfully, there was Julia Child and Jacques Pepin on PBS, and my mother’s French cookbooks. I decided to pursue a culinary arts education in the middle of publishing my soup cookbook last year.

What made you pick Escoffier?
I looked around at the other culinary arts programs in Colorado and beyond. I was drawn to Escoffier by the prestige of the name and by the emphasis on Farm-to-Table education.

What is your favorite part of Culinary School so far? Learning from the absolutely amazing chef instructors at the school, without a doubt.

Tell me about the cookbook you’ve been writing.
My cookbook is devoted to soup. I curated, tested, and modified recipes to ensure that anyone — even someone who has never made soup without using a can opener before — can produce amazing, restaurant-quality soups. Instead of boring photos of soup, I’m offering beautiful photos of my friends in the Denver entertainment scene, shot at Denver landmarks, like Casa Bonita and Coors Field. I’m in the final stretch of publishing and expect it will be released in October. Right now, I’m taking pre-orders for a special edition of the cookbook that’s signed by all the “pin-ups”. That pre-order, and other information, can be found at www.frenchiesoup.com

What are your plans for after graduation?
Post-graduation, I plan to continue my culinary education and plan to pursue sommelier certification as well. Plans are already in the works for my second cookbook, too. This time it will be comfort food.

Many students stress about finding an externship. Any advice?
Definitely talk with the chef instructors and staff at Escoffier, they have tremendous experience and all the contacts you could imagine. Also, think about what restaurants you love — talk to the chefs and managers!

Do you have any cool class stories to share?
Our class has seen a lot of weirdness, drop-outs, and drama. We are each of us completely different in many ways and although there is no good reason for it, we all are friends and care about each other. We’ve also been lucky to have the best chef instructors ever, in the history of the world.

What advice do you have to share with future students to help them succeed?
Listen. Take notes. Leave your ego and your problems at home at the door. Drink in as much of the experience as you possibly can. It goes by incredibly fast! If you can manage it at all, it’s better not to work while you’re in the program. 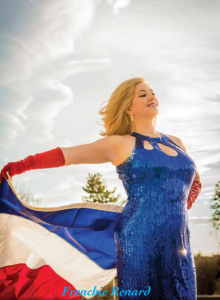