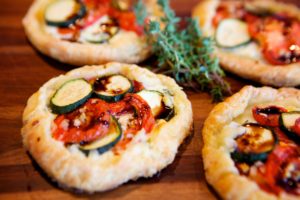 According to the National Foundation for Celiac Awareness, an estimated 1 in 133 Americans has celiac disease. That’s 1 percent of the population. Celiac disease is an autoimmune disease that causes problems in the small intestines that lead them to have trouble properly absorbing nutrients. Gluten triggers the disease and people with the disease avoid it in order to not have gut issues like bloating and constipation. There is gluten in a lot of things you wouldn’t necessarily expect. Here are some great substitutes to help you use your Austin culinary arts school skills to cook for someone with a gluten intolerance:

Replacing flour
The typical flour at most grocery stores is made with wheat. This is a no-no for people who have celiac disease. If you need a flour alternative, try these options:

Replacing grains
Looking to make something with couscous? Instead, use quinoa, cauliflower or polenta. Hoping to make a pasta dish? Lose the noodles and substitute with thinly sliced or peeled eggplant, spaghetti squash or zucchini. Rice noodles are acceptable if you really want that noodle texture, but be sure to get one that has not been made at a plant that also makes regular noodles or else it may be contaminated. Are you planning to make burritos? Skip the white-flour tortilla and opt for the more traditional corn version. Lettuce leaves will also do here if you’re looking for a low-carb option. Pizza dough is another tasty dish that commonly contains gluten. Make your own crust with cauliflower or mashed potatoes and your gluten-intolerant guest will appreciate your ingenuity and the delicious pizza you made.

As for breakfast, unless you have gluten-free versions, you’ve got to rethink French toast, regular toast, pancakes and even oatmeal. Make grits instead of oatmeal and cook cornmeal or buckwheat pancakes instead of the regular wheat flour varieties. Skip toast altogether or make your own bread with gluten-free flour or flour alternatives. If you throw some veggies in a wok and start to make a stir fry for your guest, you will need to re-think using regular soy sauce. Most brands contain wheat. Instead, use tamari or liquid aminos. They haven’t been contaminated by gluten.

In a pinch, always remember that most things that contain wheat can be made without it. Many brands offer gluten-free varieties to cater to the growing population of people diagnosed with celiac disease.