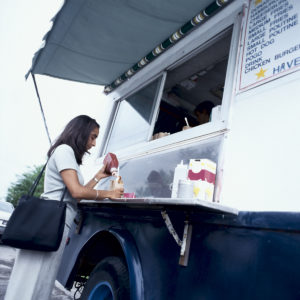 Food trucks are a huge part of the Austin culinary landscape.

Though they didn’t originate in Austin, food trucks are a huge part of the local culinary scene. Since the early 1990s, the number of food trucks across the city has grown, making Austin, alongside the equally food obsessed Portland, one of the unofficial food truck capitals of the entire U.S. From cupcakes and hot dogs, to gourmet sandwiches and pizza, there is a food truck to satisfy almost any hunger. Here are just a few of the best food trucks across greater Austin – most of which are well worth any prerequisite traveling:

Micklethwait Craft Meats: In 2012, chef Tom Micklethwait first started serving up plates of barbecue from a vintage Comet trailer that he’d drive to Rosewood Avenue each day. Now, just a few years later, the same spot on Rosewood plays home to a whole barbecue empire, with both Micklethwait Craft Meats and Romanouskas’ Delicatessen serving up racks of ribs and pulled pork galore. Yet chef Micklethwait still approaches the art of barbecue with the same sense of integrity and good humor, making for a dining experience similar to a friendly cookout.

Veracruz All Natural: At one point, Veracruz had three trucks running simultaneously: the original truck located on Cesar Chavez; another truck located just outside of Radio Coffee & Beer; and a “filling station” on the East Side. While the third truck has since closed down, the remaining trucks are still running strong. Both menus include a number of all-natural Mexican dishes, including quesadillas, tortas, migas, breakfast tacos and more. Be sure to try one of Veracruz’s traditional dishes, like the vegetarian tacos, grilled talapia or the chicken mole.