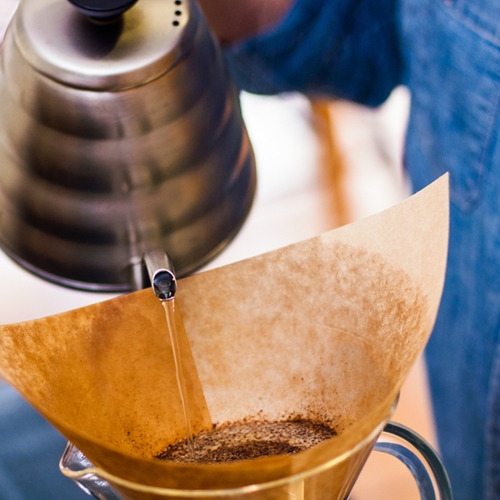 For those enrolled in culinary arts programs, the quality of food is of course a major point of interest. Chefs demand farm-fresh vegetables, local meats, artisanal cheeses and well-paired wines, so it should come as no surprise that the quality of coffee is rising in the food community as well. The third wave of coffee refers to this movement, a long-term effort by elite bean roasters around the United States to better the taste of our daily brew. The third wave is comprised of coffee roasters, chemists, baristas and enthusiasts looking to make the beverage as highly specialized and distinct as wine or craft beer. Though brewing third wave coffee can be more expensive and time-consuming, the movement is emblematic of our culture’s continual shift toward focusing on the source and quality of our foodstuffs.

What is the third wave?
The second wave of coffee is perhaps best personified by Starbucks. Coffeehouse chains expanded across the nation providing comfortable hangout spaces for students and professionals to work and enjoy coffee prepared to individual preference. However, the quality of the coffee itself at these locations is often low, as the brews have to be made quickly and are often diluted with sweeteners and additives.

The third wave looks to better source and brew coffee. This is done throughout the entire process of coffee production. Coffee roasters work more closely with farms to ensure they receive high-quality beans that are often of single origin, creating a distinct flavor in a similar way to wine varietals. Farmers supplying third wave roasters have to cultivate their beans to meet a higher quality, meaning they often must harvest the crop several times as beans ripen at different rates. This is part of what leads to the hike in price. Third wave coffee is often direct trade and shade grown.

The brewing process is also more meticulous. Skilled baristas at boutique third wave coffeehouses utilize a wide array of brewing methods such as the pour-over of French press. As of late, cold-brew coffee – brewed at room temperature for a longer duration of time – has also become popular among the coffee elite. This means the process of making each cup can take longer when you’re waiting in a coffee shop. For example, at Blue Bottle Coffee, one of the most well-known third wave retailers on the west coast, each cup takes around three or four minutes to brew. This helps ensure the coffee has the freshest, most distinct flavor possible.

Several coffee companies leading the third wave of this omnipresent beverage include:

Stumptown
Stumptown Coffee Roasters is headquartered in Portland, Oregon, but the company has locations in many major cities including New York, Seattle and Los Angeles. The company strives to source the best coffee beans in the world and form close relationships with its farmers. Stumptown is well known for its bottled cold-brew coffee.

Intelligentsia
Chicago-based Intelligentsia Coffee is a Midwestern third wave staple. The company works extensively with its growers to develop unique, flavorful coffee that can easily stand on its own. This allows Intelligentsia to pay its farmers well, ensuring consistent high quality and profitability for all those involved in the process.

Blue Bottle
Blue Bottle Coffee has been in the spotlight often as of late, perhaps due to having nearly $50 million in venture backing and boasting a Silicon Valley celebrity clientele. Blue Bottle coffee shops are also known for going against many norms of current cafes. Blue Bottle baristas manually make each cup of coffee upon order, use rare beans that mean brews will not necessarily have consistent flavor, and the shops lack Wi-Fi altogether. This allows the company to focus solely on the quality of its products.