We did whole hog butchery this week.  Rather than give any kind of commentary, I took a bunch of pictures and thought I would simply describe what we did, because it’s not really the kind of experience you can only describe in words.

When the pig arrived, it was already eviscerated and most of its innards were gone.  I say “most” because the kidneys were still there.  This is to gauge the animal’s health when it was slaughtered—off colors in the kidney are a telltale sign your pig was ill. The first step was to remove the head.  This was accomplished by cutting the meat around the junction between the base of the skull and the first vertebrae.  As soon as that was done, the head was severed using a bonesaw.  The bonesaw was then used again to cut the hog in half along the spine.  It would have also been done to the breastbone, but it had already been split when the hog arrived. The first half of the hog was done by Chef Eric with a running set of instructions while we watched.  We students repeated this process with the other half of the hog until each of Chef Eric’s cuts had a mirror match.  In all, we lost 11 ounces of the 90 lb hog to waste. So, somewhere in the realm of 0.76% of the pig had to be thrown away.  We will use every last ounce of what we kept in the coming weeks, including in our culmination dinner. Each piece was triple wrapped in plastic, labeled, and put in the walk-in to be cured Wednesday, Thursday, and Friday.  The only exception was the tenderloin, which we seared off and ate with a light brandy sauce that turned out perfectly.  As the hog was slaughtered no more than a week ago, the flavor was much stronger and the texture much firmer than I’m accustomed to.  If you’re able to acquire a whole hog from a CSA this soon after slaughter, I highly recommend it.

I didn’t think it would bother me, but butchering the hog when it still looked like a hog was unnerving.  There were small moments of panic when I just couldn’t ignore the fact that we were cutting a real animal apart.  Combine that with the time we spent with the pigs at Black Cat Farms on Monday, and it was somewhat hard to push through. That being said, there is a moment where the hog sort of stops being an animal and starts being meat, and it happened much sooner than I expected.  Even while I was wrapping the head in plastic for storage (we’re making head cheese later in the week), that unsettling feeling didn’t return.  I can’t say that it would return if I were to butcher another hog, but I will hopefully find out some day.

The whole hog butchery is a part of the curriculum that many students look forward to and many others dread.  I absolutely think it’s a vital part of the program, as it instills a great deal of respect for the fact that animals give their lives just so we can have their proteins and fats.  It was unpleasant at times, but it’s an unpleasantness I think everyone everywhere should have to go through at least once in their lives.

Regardless, it was an educational experience.  I was impressed with Chef Eric’s abilities as a butcher, and hope to match him one day. 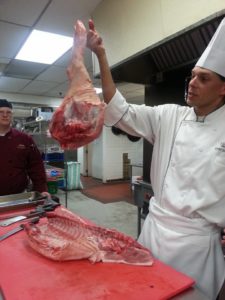