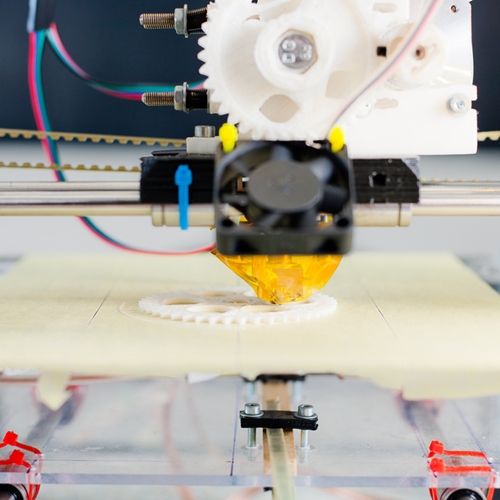 Technology tends to make life easier. From using an app to control your grill temperature to not having to hand-beat eggs, it can be super helpful in the kitchen. As students of chef schools in Texas, it is important to stay aware of the latest news in food tech. What’s one hot topic of the moment? Major companies are creating and modifying 3-D printers to use edible ingredients to print food.

The Foodini
Barcelona company Natural Machines has launched a printer made specifically for the kitchen called the Foodini. The device uses open capsules where the consumer places ingredients to be turned into printed dishes. This allows for a greater range of possible options than if the capsules were pre-packaged. Foodini is the first machine to print a wide range of edibles. Natural Machines hopes the printer will make the more tedious tasks of food prep easier, such as forming bread sticks or making ravioli. Its website features videos of the printer creating many different dishes, from delicately-layered animal-shaped nuggets to pizza, quiche spinach dinosaurs and mini burgers. The machine is also handy for lettering and designs. One photo shows a roasted red pepper that looks like a piece of tiny, intricate sea coral. Foodini is set to be available for purchase in 2015 for around $1000.

CocoJet Printer
According to Ad Age, Hershey has created a chocolate-only printer that can print virtually anything. The company worked with 3D Systems, a major 3-D printing company, to make the latest edition of the printer. It is a 2-foot-by-2-foot glass and metal cube that uses a layering technique to form chocolate confections that can take several minutes or more than an hour. Jeff Mundt, the senior marketing manager of technology at Hershey’s innovation center, told Ad Age that the projected May introduction to the public is going to be a “launch and learn” situation. The major time-consuming aspect of the printer has been adjusting the classic Hershey’s bar recipe to be used in the machine, which squirts the chocolate out as a liquid form from metal-nozzled cartridges. Hershey has sensory experts and food scientists on the team to make sure that the new device’s products are true to the traditional chocolate bar taste. Just select your kind of chocolate and pick an image and the machine will print letters, shapes and even 3-D renditions of people that are beautifully designed and definitely delicious. The machine will be available for consumer use as of May at the Chocolate World attraction at Hershey headquarters in Pennsylvania.

Open toys
People sometimes have no interest in eating their vegetables – kids especially. According to 3-D Printing Industry, when Samuel N. Bernier of LeFab Shop saw an opportunity to jazz up the less appetizing items, he turned to 3-D printing for help. He worked with Thomas Thibault to create printed parts similar to Mr. Potato Head pieces that are meant for use on a real potato. The printed pieces include helixes, wings, spoilers and wheels to make a total of 14 items in the collection, the blueprints of which are published on Thingiverse, Cults3D and YouMagine so anyone with access to a 3-D printer can try out the designs. Looking to entice your kids into taking a bite out of something that came from your garden? Stick a printed pair of wheels and a spoiler on that baked potato and they’ll be digging in in no time. Want to turn a cucumber into a plane? Give it tail tips, landing gear and wings and it’s ready to fly off the counter and into the mouths of hungry diners.

While 3-D printers are not widely available for use in the culinary arts industry today, there is a lot of potential for them to facilitate creativity in the kitchen. The devices could help streamline repetitive projects and add a mechanized kind of fun and exactness to food creation. Some may shun the new technology for taking the hands-on part of cooking out of the process, but it’s not likely to completely replace real live chefs any time soon. Looking to see a printer in person? Public libraries and universities across the globe play host to the devices and often allow for public viewing.