Though summer officially commences toward the end of June each year, most people start feeling its seasonal vibes sometime in May. In the U.S., summer is celebrated in a number of ways, from vacations and day trips to excursions on the lake and hiking trips in picturesque parks. But perhaps there is no other activity more synonymous with summer than grilling. In fact, according to a 2015 survey by the Hearth, Patio and Barbecue Association, 62 percent of families grill for Memorial Day, while 76 percent light up the propane for the Fourth of July.

Many chefs are just as into the art of grilling, and some take advantage of the warm weather to head outside to cook up hot dogs, burgers and more. It’s not only great fun but a chance to hone key cooking skills. If you’re looking to spend the summer grilling, follow the six handy tips to become a genuine grill master:

1. Know what not to do
In 2012, Forbes spoke with a number of A-list chefs, including Emeril Lagasse and Bobby Flay, about their secrets to excellent summer barbecue. Aside from specific techniques to follow, there was one especially interesting point: great grilling is often about what you don’t do. For one, you never want to put the food on the fire too early; otherwise your meat won’t grill properly. If you’re using gas, you only have to wait a few minutes. Wood or coal, meanwhile, require at least a 30-minute wait. You also want to delay any saucing till the very end, or your smoky mesquite will cook right off. Finally, avoid babysitting your barbecue. That means you should not turn meat too frequently, as you’ll lose out on valuable smoke and flavor. Just stay close enough to keep an eye on the food. Grilling is a waiting game, and if you don’t have the patience then you’re bound to ruin a possibly great meal. 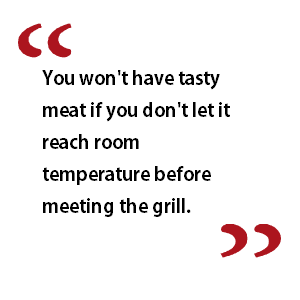 2. Gas, charcoal or wood?
There exists a debate among many grilling aficionados: gas, charcoal or wood? Tim Love is a grilling guru from Texas, and when he spoke with readers of Food and Wine magazine in March 2016, he said that there is no definitive answer to this ongoing conversation. Rather, your choice depends on your style as a chef. While people might find that gas leaves a distinct aftertaste on most grilled meats, Love explained it’s a good option for younger or inexperienced chefs. While he opts for wood (mesquite for beef and pecan for chicken), he added that it’s just as important as the temperature it burns at. To make sure your food grills properly, he suggested slow cooking as a way to control every element. If you opt for charcoal, though, he advised people to give it time to get white hot and only place coals on one side of the grill, which means you can sear and rest all under one hood.

3. Make the meat matter
Chef Michael Symon has won numerous culinary awards and appeared on the Food Network. When he spoke with Mashable in mid-2014, he mentioned that while it’s important to consider things like cooking element and toppings, great grillers put the bulk of their attention on the meat. For one, you should always buy less expensive cuts – pork belly or butt and brisket for instance – whenever you’re barbecuing. These meats are much heartier and will be more tender and flavorful once cooked. You won’t have tasty meat if you don’t let it reach room temperature before meeting the grill. As an extension, meat should always rest after cooking, as this keeps it from drying out. Finally, always season your meat. Even if you just use salt and pepper, letting the beef or chicken sit for a couple hours in seasoning can make all the difference.