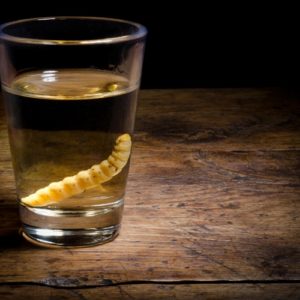 Students of Austin culinary arts school have a new after-class hangout spot. Cesar Aguilar, the bar manager at E. Sixth Street hotspot Whisler’s, has quietly opened a small mezcal bar. Located on the second floor, above the main bar space, Mezcaleria Tobala features a menu of 19 different mezcals that range in price from $9 to $30 a glass. The smoky liquor here is served straight, either as a half pour in a clay cup called a copita or a full pour in a traditional glass called a veladora. The interior of the space is meant to be reminiscent of Oaxaca, the Mexican state famous for its mezcal production. An antique cabinet houses the various bottles behind a vintage 1950s Mexican bar. Black and white pictures hang on the plaster walls while Latin music plays delicately from a 1970s stereo system, adding a vintage vibe to the bar’s atmosphere.

Currently, Tobala’s mezcal menu features spirits from purveyors such as Wahaka, Mezcal Vago, Del Maguey, Pierde Almas, Alipus, Los Nahuales, Ilegal and Mezcal Union. Aguilar spearheaded the project in order to introduce more people to the culture that surrounds mezcal production in Mexico. But what exactly is mezcal? Many know it as the liquor with the worm in the bottle, but don’t let that turn you off. Mezcal is better described as tequila’s smoky cousin. Both are made using similar processes and ingredients though mezcal production is not as highly regulated as tequila.

Mezcal and tequila are both made from the juice of the agave plant. However, Mexican law requires that anything labeled tequila must be made from the juice of a specific species of that plant – the blue agave. Mezcal can be made from many more different agave strains and species, allowing different producers to give their variety a unique taste. Additionally, while blue agave is cooked in an oven during the production of tequila, the plant is smoked over charcoals when being prepared for mezcal. This is where the smoky flavor comes from. And the worm? Legend has it that worms were placed in mezcal to demonstrate the high proof of the liquor. The alcohol preserves the worm, preventing it from disintegrating. Thus, an intact worm was evidence that the mezcal drinkers weren’t being ripped off.

When visiting Mezcaleria Tobala, be sure to try the traditional mezcal bar snack, orange slices sprinkled with sal de gusano. The brick red condiment is the product of crushed moth larvae, chili peppers and salt. The combination of earthy flavors from the sal de gusano and fruity kick from the citrus are the perfect complement to the heat and smoke of mezcal!