The third month of culinary school has come and gone, with a summer break and regional cuisines looming over the horizon.  The first month was identified mostly by intimidation, while the second was marked by transition.  The third month’s theme seemed to be challenge, with our class facing tasks that most of us haven’t seen ever before.  It ended with a foray back into the classroom, an environment may of us came to culinary school to escape!  But the knowledge is a great boon, and shouldn’t be ignored.  Here’s a more detailed run-down of what you can expect:

This was a continuation of the baking week from last month.  We learned buttercreams, cakes, and cake decorating, culminating in each of us decorating our own two or four layer cake.  While I found this somewhat easier than the rest of my classmates (having spent plenty of time practicing piping and icing in the Pastry Program), I was very proud of my classmates for powering through this section despite their relative lack of interest in cake decorating.

We also learned the basics of dessert plating, learning how to make garnishes like tuilles and fruit leather, as well as sauces like coulis and caramel.  All of these skills were demonstrated during our molecular gastronomy day, giving a basic rundown of the use of more scientific ingredients in order to make historically unique food and present it in new and interesting ways.  This was a lot of fun for those with a more meticulous frame of mind.  All in all, wrapping up the dessert section of this block was a lot of fun, but I was glad to return to more savory applications. Here we started charcuterie week.  I touched on this briefly in a previous article, but I didn’t mention that this was one of my favorite sections of the culinary program so far.  Charcuterie, for those who don’t know, is the art of processing meat in such a way that preserves the meat in some way, such as smoking, air drying, or curing.  We began the week with forcemeats, which are basically meatloaves that are baked in tureens and served cold.

From there we moved on to cased sausages, including Andouille, Italian, and hot dogs.  I’ve seen the episode of How It’s Made where they explain how hot dogs are made, and so I always assumed they had to be done in a factory.  Not only were our hand-made hot dogs larger than traditional dogs, they had a better texture and tasted better—I highly recommend giving this a try sometime.  This moved on to pickling and preserving, from cucumber pickles to orange marmalade to kim chee.

This culminated in two buffet days.  The first being a charcuterie board showcasing the varieties of meats, breads, and condiments we had made throughout the week that we were incredibly proud of.  The second was a canapé buffet, showcasing a number of hors d’oeuvres we had prepared that day, including meatballs, hummus crostini, mini spanakopita, and mini corndogs.  Again, we were proud of our work, and the ease with which we all worked together finally started to improve. 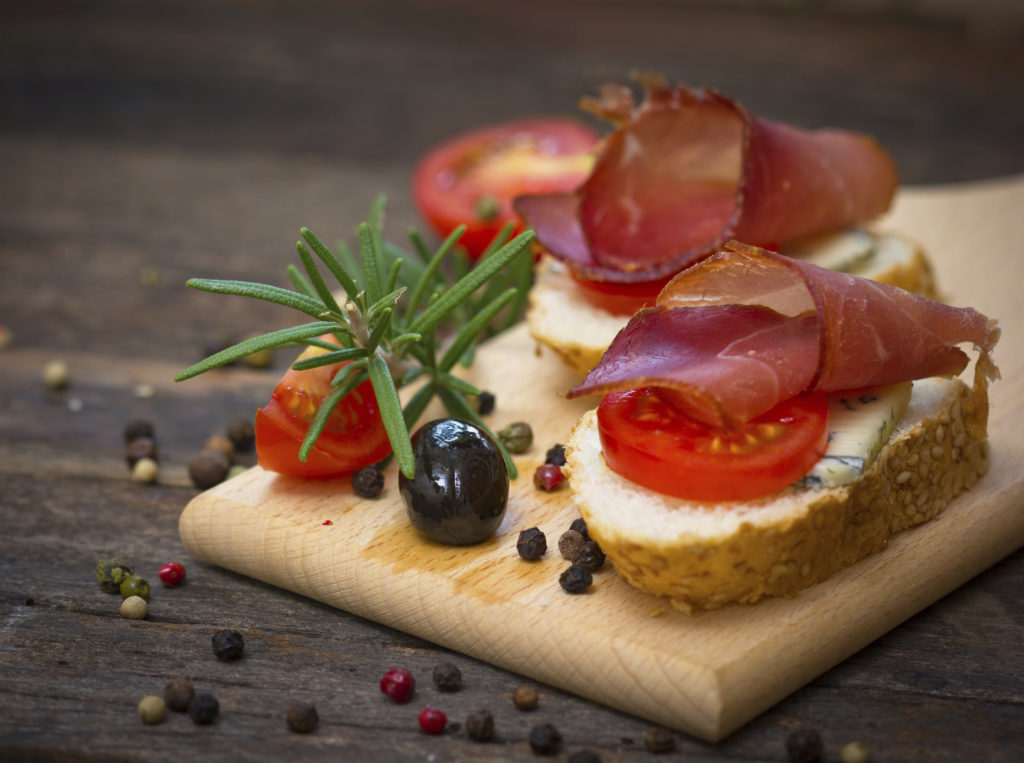 This week was back in the classroom for entrepreneurship.  We had a variety of tasks to complete, but the main project is for each team to come up with a business proposal, pitching an idea for a restaurant, food truck, or other business related to the culinary industry and then take that idea through the planning stage and just shy of starting work on the project itself.  This included developing our menu, costing our product and equipment, finding locations, determining which laws you have to abide by and permits you need to purchase, and so on.

While many consider this portion of the program boring, it’s eye-opening for many.  A lot of television programs make owning a restaurant look like a lifelong vacation/adventure, with the owners having a blast day in and day out.  But much of owning a business is the boring grind style of work, including tons and tons of paperwork.  This helps give students a better perspective of what they can expect if they open the doors to their own place, increasing their chances of success.

This week finishes out entrepreneurship.  Our team is developing a food truck whose goal is to travel from office park to office park, offering various cubicle farms and corporate offices a tastier and healthier alternative to vending machine snack food and cafeteria fare.  We’ve priced out a variety of food trucks, settled on a commissary where we can work on more difficult preparations, and on a menu.

All that’s left to do is pricing out the menu and researching the laws and permits we need.  As I’m writing this, it’s only Monday, but we’re on a pretty good pace to finish with time to spare.  I won’t go as far as to say entrepreneurship has been fun, but it gave me a great deal more respect for restaurateurs and business owners than I used to. In addition to this, Chef Kelly also helped us refine our resumes and find a short list of places we’re interested in doing our internships to complete the program.  Our internship period begins November 10th, so there isn’t a whole lot of time to decide and start sending out cover letters.

Finishing out second block is bittersweet, as we’re leaving Chef Kelly and a lot of kitchen work we were more familiar with and move into cuisines we’re less familiar with.  While that adventure is exciting in and of itself, moving on to something new always brings a certain amount of anxiety with it.  But my classmates and I are starting to gel as a unit, and the challenges before us will only further solidify that.  I am looking forward to it.