Blog > Food Entrepreneurship > From Kenya to Colorado: Chef Arnold Safari on Starting a Restaurant During COVID-19

Auguste Escoffier School of Culinary Arts has shared culinary education with students from all across the world. Some study online, earning their degrees and diplomas while working and living at home. Some travel to the U.S. to attend school at our Austin or Boulder campuses, and then bring what they learned back to their home countries with them.

And some come to the U.S. to bring their rich culinary knowledge to us — and take the opportunity to learn while they’re here.

That was the case with Chef Arnold Safari, who was already an established chef in Kenya before traveling to the United States to share what he knew with a hotelier in southwest Colorado. Now running his own restaurant, Chef Safari is sharing African cooking with the greater Durango, Colorado, community.

From Kenya to Colorado

Arnold Ngumbao, aka Chef Safari, has cooking in his genes. His father is a well-known Kenyan chef who started to teach him how to cook at the age of 9.

As an adult, Chef Safari joined World Chefs Without Borders, a humanitarian group that travels the world and provides food and culinary training in disaster areas and relief camps. During his time with the group, he traveled and cooked in every country in Africa, building on his foundation of Kenyan cooking, and both teaching and learning everywhere he went. After settling down to work as the chef in a 5-star resort in Tanzania, Chef Safari met the owner of Durango’s Strater Hotel, who was staying at the resort. He invited Chef Safari to come to Durango to work as a guest chef, and share his knowledge of African cuisine with his hotel staff. They worked out the details, and to Colorado he came!

While working in the U.S., Chef Safari was sending his earnings home to his wife and children back in Kenya. But he grew concerned for their safety, as a violent terrorist group began targeting people with relatives in America. The Durango community rallied around him at this time, helping to raise funds to cover the costs of relocating his family.

In 2014, Chef Safari was successful in bringing his wife and younger children to the U.S. to join him. Soon, he was the executive chef at the Strater Hotel. With his family around him, and his career looking good, Chef Safari enrolled in Escoffier’s online culinary arts program. He was already a chef, but he knew that there was always more to learn!

By early 2020, Chef Safari was working at the DoubleTree Hotel in Durango, but was laid off after COVID-19 broke out. Instead of resting, he decided it was the perfect time to start his own restaurant. 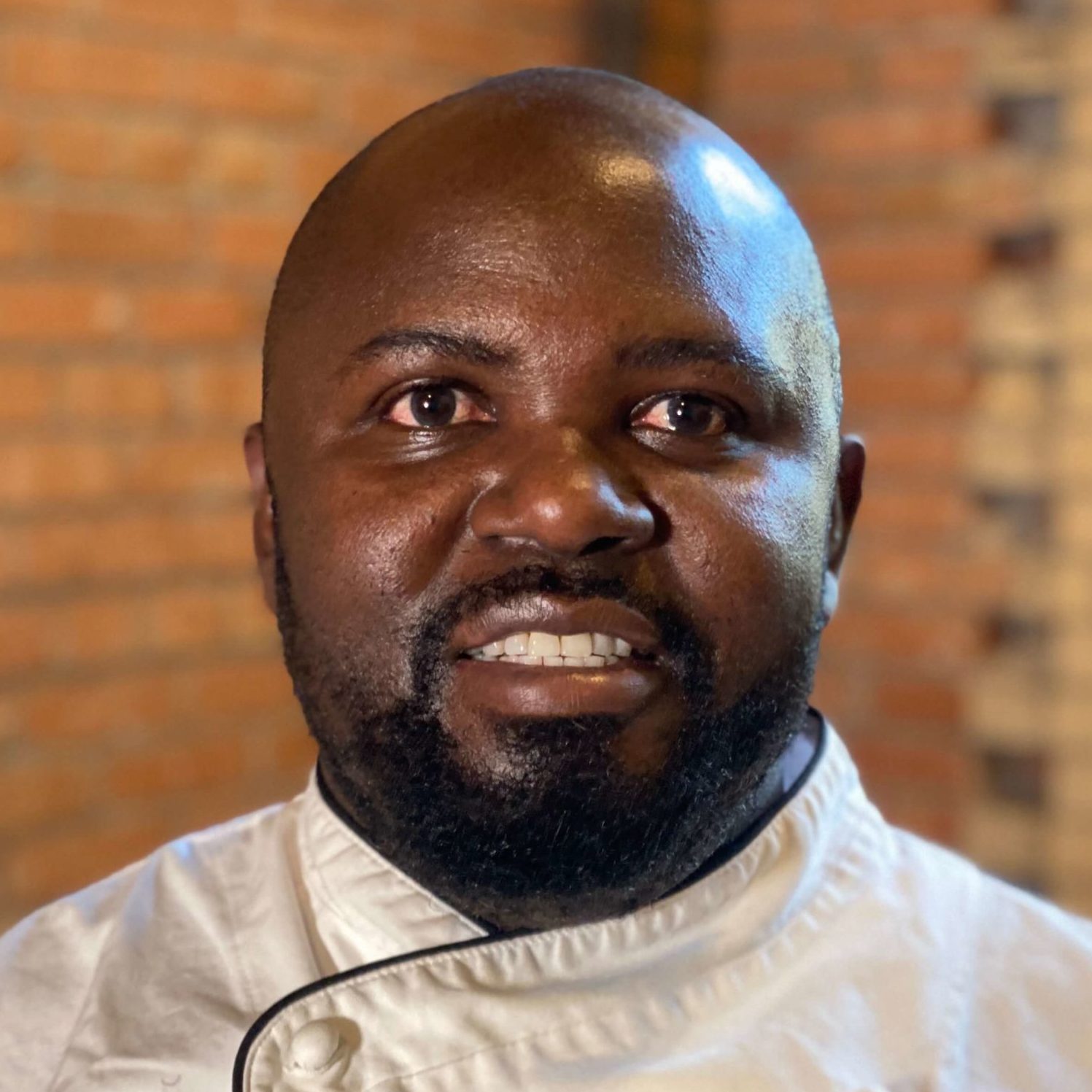 “Escoffier has helped me to achieve my goals. By the time I graduated, I was [confident enough] to start my own restaurant during COVID.”
Chef Arnold Safari, Escoffier Online Graduate & Owner, Eat Zawadi

Chef Safari’s goal was to introduce African food to more people in Durango. He started with a booth at The Smiley Cafe, serving “grab-and-go” lunches at the Internet cafe for people to bring home. It was a huge success, selling out in just 30 minutes!

Encouraged by the success of the grab-and-go meals, he decided to open his own delivery and take out operation, Eat Zawadi. “Zawadi” is Swahili for “gift,” and it’s Chef Safari’s gift to Durango!

“The menu is a tour of Africa in food. So you will find all the flavors of dishes in my restaurant, the whole of Africa.”
Chef Arnold Safari, Escoffier Online Graduate & Owner, Eat Zawadi

This tour of Africa includes falafel from Morocco, injera bread from Ethiopia, West African jollof rice, and Leblebi from North Africa. Other dishes are from his home in Kenya, like dirt rice — basmati rice, new potatoes, and peas, topped with tamarind and cardamom curry and caramelized onions. Chapati (unleavened bread) and samosas from Kenya are also on the menu. If you’re thinking basmati rice, curry, chapati, and samosas sound Indian rather than African, you’re partially right! Kenya is in East Africa, not too far from India. Some traditional Indian dishes and ingredients migrated to East Africa over the past few centuries, where they’ve evolved and became beloved parts of Kenyan cuisine.

Why did Chef Safari have the confidence to start his own restaurant during a pandemic? He credits it to his culinary education at Escoffier.

Even though he was an expert in many types of African cuisine, he knew there was still more to learn. “[Escoffier is] very personal,” he said. “They really join hands with you one-on-one. They talk to you, they walk you through every step of the program. I could reach out to every chef whenever I needed. And it’s never ending. I keep on learning each and every time I’m in need of knowledge from Escoffier.”

Chef Safari completed his online culinary arts program in May, 2020, and jumped right into his plans for The Smiley Cafe and Eat Zawadi. With his many years of cooking and management experience, and Escoffier’s business-focused curriculum to rely on, he was ready to strike out on his own.

Chef Safari’s Goals for the Future

Chef Safari has modest expectations for himself.

“One of my career goals is to become the top chef in the world [or] in Africa,” he said. “At the same time, I want to pursue my top level of understanding as a chef and help my village. I’ve inspired a lot of village teenagers in my career, and that’s very important to me.”

Chef Safari is thrilled with the reception that his food has received. He plans to open a full-service location soon, and hopes to eventually have multiple locations of Eat Zawadi throughout Durango.

“I would recommend the [Escoffier] program to any person that I come across in my career because I enjoyed it myself, and it has helped me a lot to become who I am today as a chef.”
Chef Arnold Safari, Escoffier Online Graduate & Owner, Eat Zawadi

When he’s not at the restaurant, he’s teaching his young daughter to cook, just like his father taught him. Maybe there will be three generations of professional chefs in this talented family! “The Happiest Moment of My Career”

Chef Safari’s enthusiasm and love for African cuisine is a joy to experience. And he’s a testament to the value of culinary education. Even a seasoned traveler and professional chef reaped benefits from his coursework at Escoffier.

“The moment I started Escoffier’s culinary program, that was the happiest moment of my career.” We’re looking forward to seeing many more happy moments in Chef Safari’s future!

To learn more about starting a restaurant, try these articles next:

Why Are Internships and Externships Important for Culinary School?