“22 veterans a day 1, on average, commit suicide. And I can say that it’s easy to be a part of that number.” Tiffany Moore spoke the words slowly, reflecting…remembering.

It was a somber pause in what to that point had been an energetic and lively discussion on food, restaurants, and culinary school. As a medically-discharged U.S. Army Veteran, Tiffany herself had faced plenty of challenging circumstances. Doctors told her that she would never be able to pursue her dream of opening a restaurant. She was told, in fact, that she wouldn’t be able to work in the culinary field at all due to a spine injury she had suffered while deployed.

“I medically retired at 29 years old and they say: ‘Hey, you can’t do anything else.’ So I’m supposed to sit at the house every day?”

Fortunately, Tiffany’s not a suicide statistic…quite the opposite. She finds herself on a mission to, in her words, “feed life,” by founding a new restaurant in Atlanta, Georgia.

In support of her new venture, she recently won $25,000 in seed funding and $20,000 in pro bono legal fees. But her path has been anything but a straight line.

Tiffany’s story is that of a true “Hero’s Journey.” It begins with high hopes, physical danger, and nearly dashed dreams. It’s one of finding mentorship, in the form of Chef Instructors, who helped her gain both culinary and business skills—and who helped her overcome new life challenges that nearly derailed her…again.

It culminates in graduating with honors from Auguste Escoffier School of Culinary Arts in 2019, and forging a new path of entrepreneurship fraught with new challenges and opportunities.

And while she’s still in the midst of writing this next chapter in her epic life story, Tiffany graciously took a time-out to share with us her amazing adventure. The hope is that others—and especially veterans who are facing the challenges of re-entering civilian life—might keep pursuing their dreams.

“If it’s your passion, if it’s something that you cannot stop thinking about…that’s what you’re supposed to be doing. Take that time to go and really focus on it.” 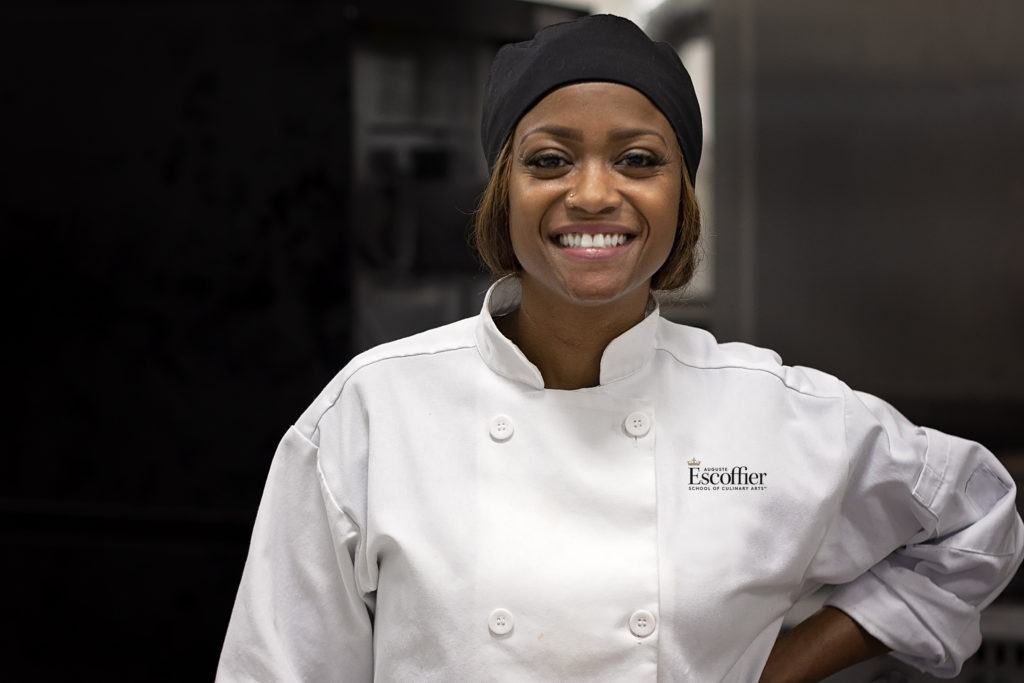 Like many people, Tiffany Moore had a dream of someday owning her own restaurant.

“I wanted to own a poetry cafe. I love to dance. I love cooking food. And I love seeing people devour my food. But I ended up joining the military instead.”

While her plan was to gain experience as a cook in the military, her recruiter pushed her away from the idea.

“He mentioned that I may have to work on holidays. And I was like…’I don’t think I want to do that’! So I ended up serving in ammunition.”

But while deployed to Kuwait in support of Operation Iraqi Freedom, an injury downrange prevented her from pursuing her dream to go back to culinary school.

“I had two cervical spine surgeries. I got a metal plate in my neck C4 through C6. And I stopped walking for about three months.”

Then the really bad news: Medical doctors at the VA hospital told Tiffany that she’d never get to pursue her dream of going to culinary school or starting a culinary career. Since the culinary industry often requires significant physical labor, like lifting heavy objects and standing on your feet for hours at a time, the risks of reinjury were too great.

Tiffany was devastated. “After the doctors told me that I could never pursue my dream, I sat in the VA parking lot and I cried.”

Yet moments later, she would discover Escoffier…and her life would change forever.

“I hopped on Instagram—because that’s what we do when we get bored! And I saw an ad for Escoffier in my Instagram feed. I was like: ‘An online culinary school? I had this idea in 2006!’ and so I called them right there in the parking lot and I was enrolled in 48 hours.

“I received it as a message from God, from the Universe.”

From Almost Quitting to Graduating with Honors

While online culinary school gave Tiffany a safer option for her culinary education, yet another health challenge surfaced.

Near the end of her culinary studies, Tiffany received a possible Multiple Sclerosis (MS) diagnosis, and needed to have a spinal tap to confirm.

Deflated and on the verge of quitting, she reached out to one of her Chef Instructors, who reminded her of Paul Prudhomme, a famous New Orleans Chef who literally ran his kitchen from a wheelchair.

“She checked on me all the time, texting me and emailing me. The support was there [from Escoffier] when I was going through a life crisis. And I almost quit. But I figured it was the devil trying to get me.”

Instead, Tiffany graduated with honors and was asked to give a speech at the school’s graduation ceremony.

Since then, she’s been able to put her skills to work in her family’s catering business, Event Hall @ Cascade. 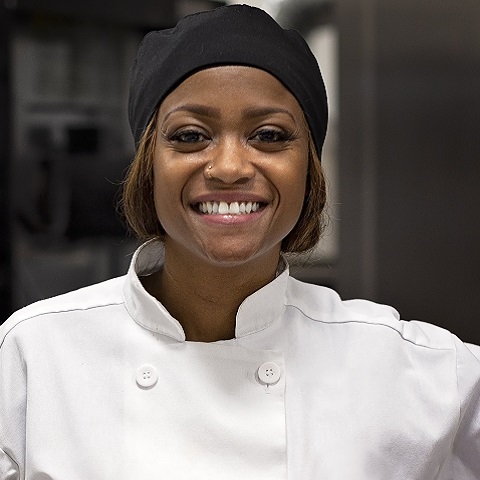 “Finishing culinary school definitely helped me with my family’s catering business. I was able to price my food better. And that’s something that I think a lot of chefs and caterers struggle with.”
Tiffany Moore, Escoffier Online Culinary Arts Graduate

“People in the restaurant industry often struggle with food costs and pricing. I realized going through school that one, I can up my pricing since I’m a graduate now (laughter).

“I wasn’t charging enough. So it’s definitely helped me learn the business side of becoming a chef, because it’s not all about ‘Oh, I just love cooking for people.’ There is a business to everything that you enjoy doing. Escoffier definitely taught me those skills.”

Getting Funding for Her Farm to Table Restaurant Idea

“I’ve always wanted to open up a restaurant…and that restaurant’s name is Lola Pecan.”

Tiffany pitched her business idea at the Military Influencer Conference through an organization called Streetshares, which gives out grants to ‘vetpreneurs’ (entrepreneurs who are veterans) and their spouses.

“There were 160 total applicants. I was in the top 3 out of 16, and then from that 3 I was number one. They said they’ve never had that many votes in the past four or five years of them doing this!”

Some of the concepts coming to life at Tiffany’s new restaurant include bringing forth black history in her food creations. She shared that her menu will have captions of why she chose specific items, including their relationships to black culinary history and the slave trade. For example, the meaning behind hush puppies, or why black eyed peas are a New Year’s Eve traditional staple in African American homes.

The winning strategy was creating a QR code. That made it easy for people to scan the code and go directly to her link to vote for her restaurant idea.

“When we had events at the venue, I’m the bartender, so I would tell people: ‘If you scan this, I’ll make you a special drink.’ So I was able to get into the top running, and I was able to pitch my business idea.”

“My plan is to build a farm to table restaurant from the ground up. I want to have it solar powered. I really would love Tesla to maybe be a sponsor on this…I’m going to be a little kid and speak that into the universe!”

“We went to Rustic Farms, right outside Chicago. And it just solidified for me again: This is where I’m supposed to be. They introduced us to the Farm to Table community…seing the pigs and the goats and learning how to make different types of butters right on the farm.”

“Sometimes as veterans, once you leave the military, it feels like you don’t belong anyplace. That’s something that a lot of veterans struggle with, like they don’t belong in the world anymore. You don’t have anybody telling you what to do every day. You have to wear your own clothes now.

“It’s hard to adapt. You have to take that discipline that you’ve learned and apply it to something that is for the betterment of your own mindset. And you’ll do great.”

Which brings us back to Tiffany’s core values and resiliency in the face of adversity.

“My purpose is to feed life. Escoffier, definitely with their farm to table lifestyle, fit with my ethics about work. So, I encourage anybody: Don’t stop your dreams. If you want to go back to school, go back to school. And you can definitely do that after you retire or separate from the military. Because your life does not stop.”
Tiffany Moore, Escoffier Online Culinary Arts Graduate

Obviously, Tiffany has many more challenges in front of her to get her restaurant off the ground and profitable. But lessons learned from the military, culinary school, and life are all there to guide her on the next phase of her adventure.

“Don’t stop shooting for your dreams. Keep going. Life may get in the way. It may stop you for a time, but keep going. Food is life.”

A Practical Guide to Culinary School for Active Military, Veterans & Their Families