Blog > Value of Culinary Education > From Substance Abuse to Culinary School Graduate: A Journey of Redemption

When you start to spend time in restaurants and kitchens, you’ll typically see that great cooks and chefs come from all walks of life—from wealth and poverty, from big cities and small towns, straight from high school or by way of previous careers in different industries.

Everyone has their own stories, along with the challenges and struggles that they’ve had to overcome to get where they are. For Escoffier graduate Parker Wilks-Bryant, those struggles could have been life-ending. But he committed to giving himself another chance by starting his story over. And now, he’s committed to channeling his own challenges into a way to help others.

Just after high school, Parker began cooking in local restaurants in his hometown of Steamboat Springs, Colorado. While cooking wasn’t a passion he was pursuing at that time, it was something he could do to get by and pay the bills.

Unfortunately, he began abusing alcohol and drugs, which affected his job. Substances slowly began to take over his life. And after six years of active addiction, he found himself in a dark place.

Parker explains, “My last night of drinking cost me a serious visit to the emergency room, a loss of great jobs and a close friend who was very important to me. I was tired of seeing people slip away from my life and I knew I needed to change before something bad happened.”

So in 2020, he checked himself into a rehabilitation facility. In this community, he was able to find the guidance he needed to get sober. While he found the prospect of a second chance exciting, he was also confronting past traumas for the first time—traumas that he had previously buried under drugs and alcohol.

“As you get further into your recovery,” he says, “a lot of unprocessed trauma comes back. It’s a lot of anxiety, depression, paranoia, and an eerie uncertainty about what the future holds. It’s a lot to deal with.”

He reached out to friends, counselors, and previous mentors for support. One of the pieces of advice he received—and which he also recommends to anyone else recovering from addiction—is to work with a really strong recovery program and keep busy.

“An idle mind is extremely unhealthy for you. Stay active in your free time and have good habits in your daily life.” For Parker, part of staying busy meant working on the next steps in his career. As Parker thought about the people in his life who had inspired him, he kept coming back to past chefs he’d worked for. One was Joseph Campbell, a James Beard Award nominee who owns three different restaurants in Steamboat Springs. He had been a great mentor and Parker wanted to be more like him. Since he had gone to culinary school, that seemed like a smart next step for Parker as well.

As he researched his options, Parker came across Escoffier. He liked that the curriculum was based in French cuisine, which is foundational for so much of modern cooking. When he talked to the Admissions Department on the phone, he found that the school offered a lot of valuable resources, like career assistance even after graduation day.

Plus, he found the option to attend culinary school online appealing. Still early in his recovery, he wasn’t sure if he was ready to move out of a sober living environment. Ultimately, he decided that he was prepared to take that step, and enrolled in the Associate of Occupational Studies program in Boulder, Colorado in 2020.

But fate has a funny way of stepping in. In spite of deciding to study in-person, COVID-19’s arrival meant Parker’s first block was virtual. But this was a temporary situation, allowing him to make a slower transition. He began his culinary curriculum online from his sober living home in Aurora before relocating to Boulder for the remainder of his program.

Addiction recovery, a full-time courseload, and a full-time job were difficult to juggle all at once. While he was grateful that his new job in Boulder gave him a chance to learn new skills—particularly in breakfast cookery, which he hadn’t done much of before—he found himself struggling with an unkind chef and a toxic work environment. When times were tough, he reached out to Chef Instructors Jesper Jonsson and Julia Wolfe. These mentors helped reassure him that he had plenty to offer, and that the culinary world is much larger than one bad boss.

“When I was working for this not-so-great chef throughout my time in culinary school, I would talk to Chef Instructors Jesper Jonsson and Julia Wolfe. They were my main mentors and they would reassure me that I was worth more and that things would get better. I’m very happy that I got to know them.”
Parker Wilks-Bryant, Escoffier Boulder Culinary Arts Graduate*

In the end, Parker’s hard work and dedication paid off. He completed the classroom portions of his associate degree in May 2021 with high honors and almost a 4.0 GPA.

The Externship at Pujol: “Close to Military Precision”

Every program at Escoffier culminates in a hands-on industry externship, to be chosen by the student and approved by the school. After working hard on recovery, school, and a full-time job for many months, he decided that he wanted to go somewhere exceptional for his externship.

He set his sights on Pujol, considered by many to be the best restaurant in Mexico City and currently ranked the 9th best restaurant in the world by The World’s 50 Best Restaurants.1 Helmed by the famous chef Enrique Olvera, Pujol specializes in incredibly high-end Mexican cuisine with fresh ingredients of the highest caliber.

So how does one apply for an externship at a luxury restaurant in another country? Parker took a simple approach. A year in advance of his externship start date, he wrote an email to Pujol to ask if they offered externships, and used Google to translate it into Spanish. After some back and forth communication and a formal application process, he was, to his surprise, accepted.

“I didn’t realize what I had gotten myself into until my first week in Mexico. As I started talking to some of the locals, they were like, ‘Wait, what? You got a job at Pujol?’ Even the locals don’t [easily] get jobs there. It’s so hard to get into.” 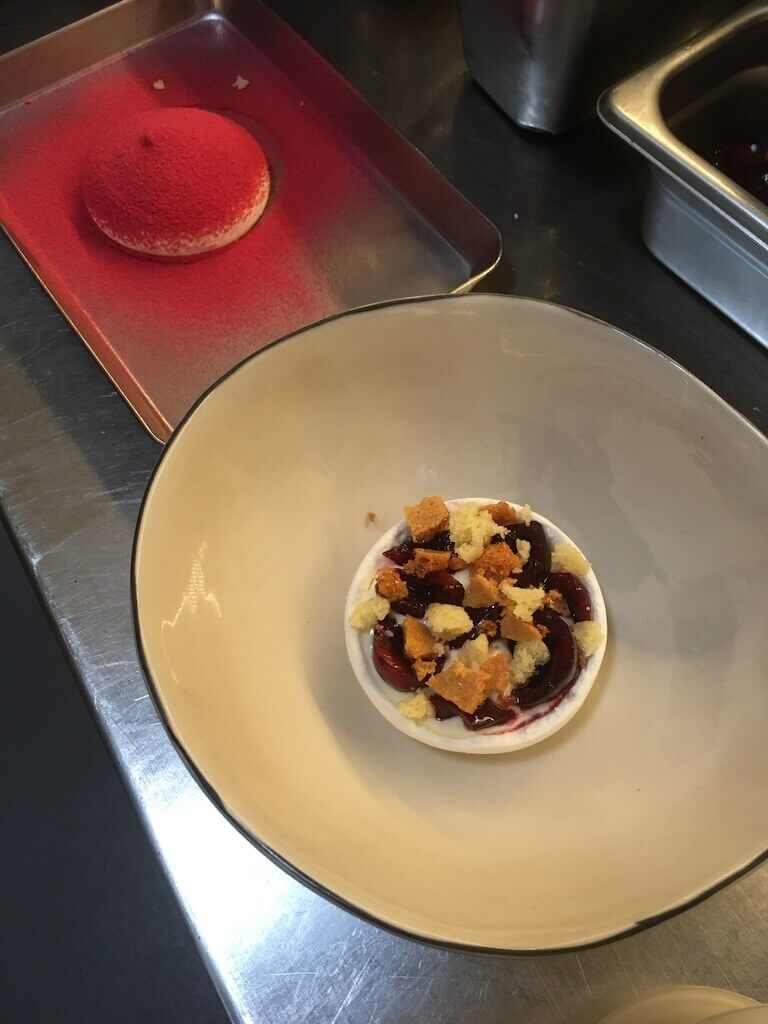 The Cook’s Life at Pujol

Parker was no stranger to hard work before he began his externship. Still, he was amazed by the dedication required by the Pujol team.

Every morning at 6:00 am, local farmers would bring in the produce that they’d picked overnight, and fishmongers would haul in their catches from just hours before. The prep team had to be on hand to break down and process everything before the night cooks arrived around midday.

The chefs expect “close to military precision,” according to Parker. Everything is tasted before service, and it has to be perfect. And part of that perfection comes from cleanliness. Most kitchens save the bulk of the cleaning for late at night, after they’re done with service for the day. But the Pujol kitchen was deep-cleaned up to eight times per day. They’d call “all hands on deck” for a kitchen clean, and scrub until it was spotless. And even while they were working, cooks were expected to keep everything neat and square, including their workstations and mise en place. Other than his coursework at Escoffier, Parker hadn’t worked much in pastry. But since he didn’t speak Spanish, he had to work for one of the few employees at Pujol who spoke English. He was assigned to Martha, lead pastry cook and Parker’s boss for the duration of his externship.

Working pastry prep in a high-end restaurant meant Parker was involved in all aspects of dessert. He whipped meringue, mixed churro dough, and churned ice cream. He made fresh sorbets and “nicuatoles” wrapped in banana leaves. He followed a complicated, multi-step process to make lemon peels edible, involving poaching the lemon rinds six times in boiling water, cooking them in simple syrup, and filling them with sorbet made from the fruit.

He also extracted chlorophyll from plants, poaching the leaves before blending with ice cubes and straining. The resulting liquid was added to ice cream for a fresh herbal flavor note. The long hours and demand for perfection were a challenge. At one point, he admitted, he considered leaving. But Martha—even though she was hard on him—provided him the encouragement he needed. She pulled him aside and told him that he was a great chef, and that he should never sell himself short, because he is more than capable. Since then, he’s always strived to hold himself to her high standard. Turning a Challenging Beginning Into an Opportunity to Help

Five months back from his Mexico City adventure, Parker is now looking to the future. While cooking is one important part of his life, helping others through their recovery journeys is another.

His next act takes him from Colorado to sunny Santa Barbara, California. After racing non-stop for several years now—going to school full-time, working multiple jobs, and completing his intense externship at Pujol—he plans to step back from work for a bit and spend more time devoted to his recovery program. He also plans to provide peer coaching to others who are fresh into substance abuse recovery. “Nobody could possibly understand what a recovering addict is going through more so than another addict,” he says.

In the long term, Parker envisions a future where he can combine cooking and recovery. He hopes to start his own sober living home and a restaurant. His goal is to use the restaurant as another source to drive social good—possibly by offering a percentage of profits to help people get into treatment centers. And it may also provide a sober employment opportunity to people who are further along in their recovery.

The strength it takes to pull oneself out of addiction and into recovery can’t be overstated. For Parker to make so much progress in just 20 months—and to complete his associate degree and excel in a grueling externship at a world-class restaurant at the same time—is an inspiration to us all. We will be following his progress with interest and enthusiasm over the next few years!

Find out where you could be in 20 months. Contact our Admissions Department to learn about the programs and opportunities waiting for you at Escoffier.

To learn more about culinary school and how it can help you achieve your goals, try these articles next:

How Much Education Do You Need to Be a Chef?

Job or School: Why Not Both?

Should I Go To Culinary School? A Guide For Deciding