Can professional kitchens be predominantly male? They certainly used to be.

But change is underway! The number of women-owned restaurants jumped 40% between 2007 and 20121, and more women are culinary college students than ever before. And that’s partially thanks to female chef pioneers like Master Baker and Auguste Escoffier School of Culinary Arts Online Pastry Chef Instructor Colette Christian.

Always Work in The Best Food Establishments You Can Find

It’s a lucky few who find their calling in life before they’re eligible for a driver’s license.

Chef Colette found hers at just 14, when she took a bread baking class in high school. She was hooked immediately. Within a month, she’d received a work permit to let her start working in restaurants in her hometown of Chicago.

“By the time I was 17,” she said, “I was trying to work at nicer places. I went to a couple of fine dining restaurants — we’re talking the late 70s, early 80s — and I was told I was too pretty and too young. One place told me they had an opening for a hat check girl, and ‘Wouldn’t that be just perfect?’”

It may have happened 40 years ago, but you can tell it still bothers Chef Colette.

Undeterred, Chef Colette still planned to pursue culinary school. But her plans were put on hold while she cared for her ill mother. She also married young, and travelled the country with her husband who worked at the Four Seasons. Everywhere they went, Chef Colette’s focus was working in the best food establishments she could find. “I’ve worked in some real fairytale kitchens. Five star hotels, really beautiful restaurants. And then I also worked in some great small places.” She worked very hard, and learned to take the curveballs life throws at you. “I almost delivered my son in the kitchen of the restaurant I was working at at the time,” she remembers. “I had no idea that I’d been in labor the whole day. And my coworker looked at me, and she’s like, your knuckles are white. 45 minutes after I left the restaurant, I had a baby boy.

“These situations are unique to women. We have a lot of stops and starts in our lives. And it’s navigating those stops and those starts that is the key to making sure you don’t give up, and you have some longevity decades into this.” By her late-20s, Chef Colette had her own restaurant, bed and breakfast, and wedding cake business. So much for “too pretty and too young!”

Even though she was a culinary business owner, Chef Colette knew there was more to learn. And she still wanted that culinary school credential. So at the age of 27, after being accepted to culinary school, she was faced with a difficult choice — how to follow her dream while still caring for her two-year-old son?

Chef Colette considers herself lucky that she had a wonderful family member that could help her during this time. But there was nothing easy about leaving her little boy at home while she studied.

If online culinary school had been an option, she says, “I wouldn’t have had to leave my baby, which almost killed me…I couldn’t look at a child without bursting into tears.” The flexibility of online education means busy parents of any gender can still get their education without leaving their families.

Chef Colette stayed as busy as possible to try to distract herself, sneaking into the first year courses to keep her mind off the little one she was missing. The hard work was worth it. When it was over, she had that Associate degree, and was able to support herself and her son after she and her husband divorced.

Giving Back and Passing It On

The next challenge was to teach. In 2004, Colette moved to California to teach at Le Cordon Bleu and the Art Institutes. “I wanted to teach because I wanted to give back,” she said. So she embarked on a career of culinary education that has spanned culinary schools, online learning platforms, and home baking classes.

During that time, she continued perfecting her skills as well as teaching. When the chef who instructed the students in laminated doughs at Le Cordon Bleu (LCB) got injured and could no longer work, no one else wanted to take over. But Chef Colette jumped at the chance. She had to teach the class and make sure the students were maintaining the highest standard — after all, their pastries were used in the culinary school’s restaurant. “[Women] can pick up the stuff that nobody wants and spin it into gold.”
Escoffier Online Pastry Chef Instructor and Master Baker Colette Christian

She also fixed the macaron recipe at LCB that didn’t work. “Those macarons — I turned that into a book! I have a book called Mastering Macarons: Classic to Contemporary Techniques.”

This attention to detail, and taking on the projects others didn’t want, is what gave her the confidence to start teaching for online creativity marketplace Craftsy. She now has seven classes on the platform, with some classes reaching 20,000-25,000 students!

If that wasn’t enough, Chef Colette also taught at Sur la Table at The Grove, the famous shopping center in Los Angeles. She just couldn’t get enough of sharing with both professional and amateur cooks. The Pursuit of Excellence

Chef Colette wasn’t content to be seen as a good baker and pastry chef — she wanted to be among the best. “I’m ambitious and extremely competitive,” she said. So while she taught her students, she also sought out some additional certifications of her own.

And most impressive of all — she’s a Certified Master Baker. Master Bakers are certified by the Retail Bakers of America after 30 hours of sanitation coursework and 30 hours of professional development. And that’s all after the minimum ten years of retail baking experience required.

The last hurdle? A two-day exam that must be completed flawlessly. “That’s 16 hours of baking,” she said, “with the judge literally standing right over you. It’s not like you present them four danishes. You present 32 Danish pastries, and they weigh every single one of them. And you can’t be off, everything has to be perfect.” Guidance Along the Way

Throughout her career, Chef Colette has been on both the giving and receiving side of mentorship. “My most mind-bending mentor was Chef Albert Kumin…he was probably the best pastry chef of the past century.” Chef Kumin had the resume to go along with such high praise — he was the opening pastry chef for the Four Seasons Restaurant in New York City, and later the pastry chef at the White House for President Carter.

How did Chef Colette get to learn from such an illustrious chef? She won a graduating scholarship for being the hardest worker in culinary school, and she used that money to attend a three-week guest instructor course with Chef Kumin at Boston University.

Now as an expert herself, Chef Colette provides mentorship to her own pupils. For one student, that meant providing encouragement to audition for the Great American Baking Show. The student was cast in the show and made it to the fifth week!

“To be a good mentor, you need the capacity to really listen hard when you are working with a student and helping them sculpt their dream, so that it makes sense for where they’re at — their location, their life situation…I try to encourage them, and be realistic, too.”
Escoffier Online Pastry Chef Instructor and Master Baker Colette Christian

“You Have to Have a Good Foundation”

Chef Colette says that the first thing for both women and men to do in their culinary career is get an Associate degree. “Take advantage of everything. Get that Associate degree, work part time. Really understand how hard the work is. But then when people love your food, it’s awesome.”

“You have to have a firm standing. You can’t compete, you can’t get certifications and not have a solid foundation.”
Escoffier Online Pastry Chef Instructor and Master Baker Colette Christian

Here’s Chef Colette’s recipe for success: “You have to have that good foundation. Then you have to set realistic goals, and then not get discouraged. When I have a student who’s falling behind, I get them on the phone, and say, ‘What is your dream? Eyes on the prize. What are we working for? What are we doing here?’ And that reminder helps them to stay focused.” 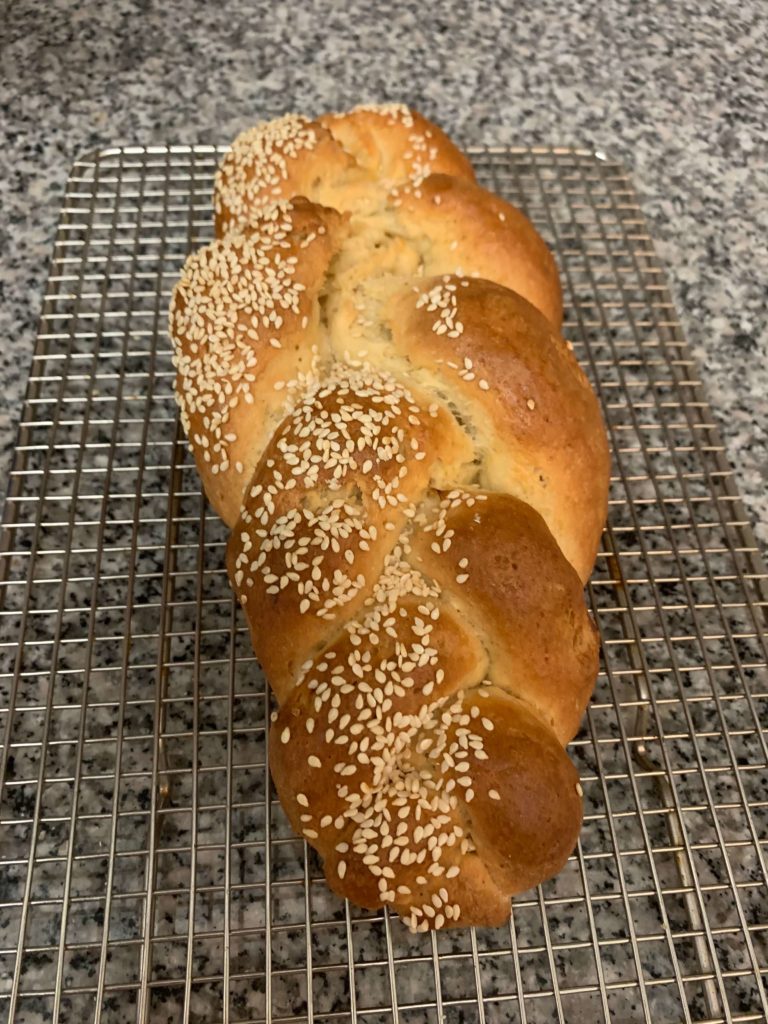 Dreams don’t have to be big, she reminds us. “[You] just might want to make the best brownie on the planet, and have an online business that [you] can do out of [your] kitchen while homeschooling three beautiful babies under 10 years old. But you’ve got to have that dream. We all do. Or else why get up in the morning?”

And with online culinary school, these dreams are more accessible than ever before. “So many of my students have young families. There’s no way they could leave them and go to school.”

Chef Colette is proud of the connection that she is able to forge with her online baking students. Teaching online requires Chef Instructors to have a lot of empathy. And she’s impressed with the level of support and training that Escoffier provides to make sure Chef Instructors and students are able to connect.

“I have a feeling we’ll see more online schools crop up in the next five years. But I don’t think anyone will ever do it as well as Escoffier. And that’s not because I work here, but because [Escoffier] is so invested. Escoffier has been going along for 10 years. They figured it out. They make it work.”
Escoffier Online Pastry Chef Instructor and Master Baker Colette Christian

“As women,” Chef Colette says, “We have to be flexible. Life changes impact us a lot. You have to be able to pivot, and you can’t get hung up. You can’t look back for too long.”

Chef Colette embodies this philosophy. After COVID-19 shuttered Sur La Table, she found her calling with the online Baking and Pastry programs at Auguste Escoffier School of Culinary Arts.

She loves the diversity of students. “It’s phenomenal…I have students that have kitchens that look like they came out of a William Sonoma catalog. And then I have a student who is nomadic and bakes out of her RV.”

Her parting words: “What’s the dream? Eyes on the prize.”

Interested in reading more true stories from the culinary industry? Try these next: