Maybe you haven’t heard the term “viennoiserie,” but chances are you’ve enjoyed some of its most-loved offerings: croissants, brioche, or pain au raisins.

The word “viennoiserie” – French for “things from Vienna” – describes a whole category of pastry. Let’s discover more about this term and what it includes.

History of the Viennoiserie

Viennoiserie is perhaps the most recognized category of French pastry around the world, thanks to its flagship baked good, the croissant. Many debate that this crescent-shaped roll is actually not very French at all, but rather a product of the former Austrian Empire.

The story goes that Austrian artillery officer August Zang actually brought the croissant and its cousin pastries to France. In 1839, after heading to Paris, he opened Boulangerie Viennoise. His pastries caught on in a big way, and voila! An entire category of baked goods became a hallmark of French culture.

The notion that viennoiserie is inherently Austrian is still disputed! Nevertheless, the term “viennoiserie” has stuck for this family of pastries.

In France, often you can find boulangeries that sell a variety of products in the same shop, but here are the proper terms for specialty bakeries.

The Most Popular Types of Viennoiseries

If you’re interested in becoming a pastry chef or baker, it’s a good idea to get familiar with the different types of viennoiseries, regardless of which ones you end up trying to perfect.

Here are a few of the most notable viennoiseries you’ll find sprinkled throughout the streets of Paris, Nice, or Bordeaux… and in many cities across the globe.

The croissant is a staple of French cuisine and its light, fluffy dough is the foundation for many other viennoiseries. It’s known for its buttery flavor and flaky texture, and can be sold as-is, or with a host of different meats, cheeses, and spreads.

It’s often included as a breakfast food, though a scrumptious croissant sandwich can be devoured any time of day. 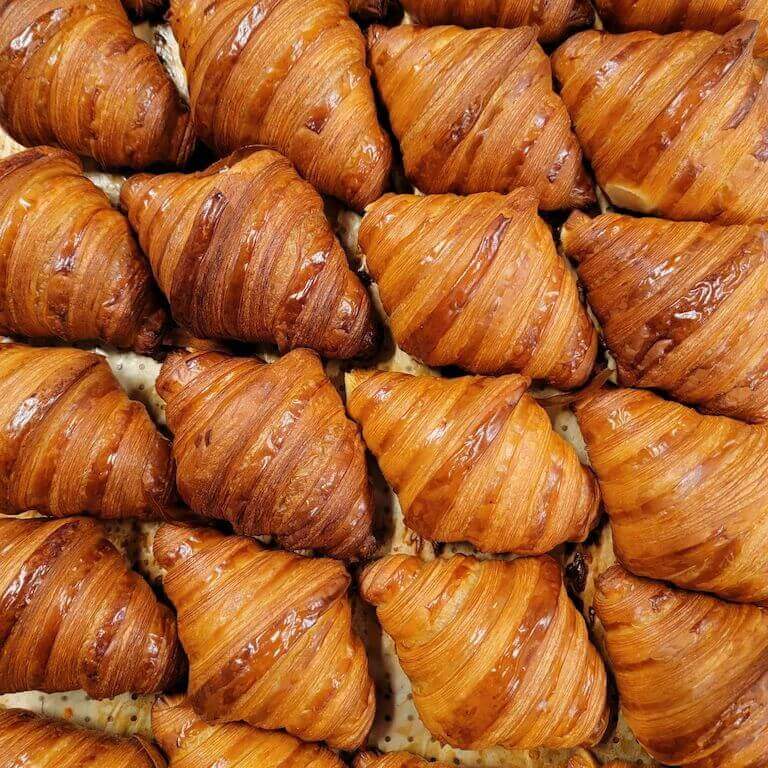 This delightful, pillowy French pastry can be eaten with breakfast, as a snack, or for dessert. It uses the same type of flaky, layered dough as the croissant, but the dough is rolled around two sticks of chocolate before being cut into a rectangle shape.

A cousin of the pain au chocolat is the chocolate croissant – which is technically the exact same pastry, only baked in the traditional croissant crescent shape. A variation on both the croissant and the pain au chocolat, the pain aux raisins is made with puff pastry and sprinkled with raisins. It’s then rolled into a log and cut into slices, or otherwise individually hand-rolled into snail-shaped pastries.

Pain aux raisins may include a buttercream filling, could be topped with a thin layer of icing, or may be brushed with an apricot or egg yolk glaze. 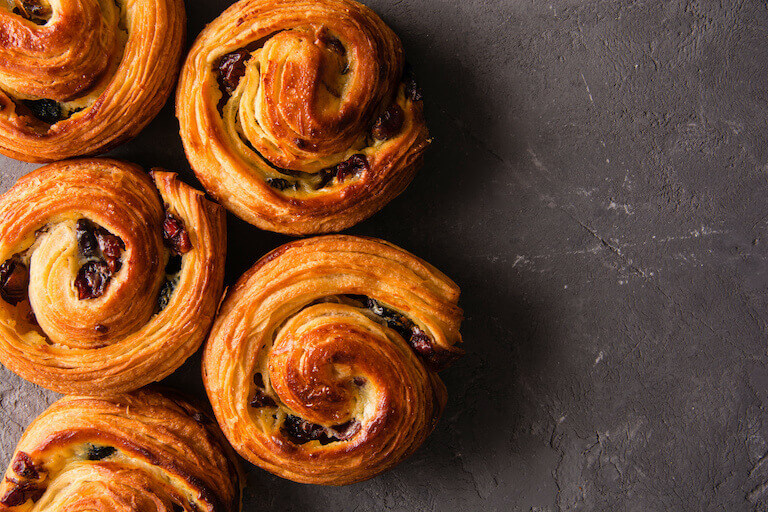 Translated “apple turnover,” this treat tucks sweet chunks of apple or fruit compote into a triangular or semi-circle puff pastry. According to lore, the turnover originated in 1630 in St. Calais, France, where the Chatelaine of the town doled out flour and apples to all households during an epidemic… resulting in the citizens’ creation of these mini pies.

Turnovers, of course, need not be limited to apples on their insides, but can work just as well with meats, cheeses, or other fruits. 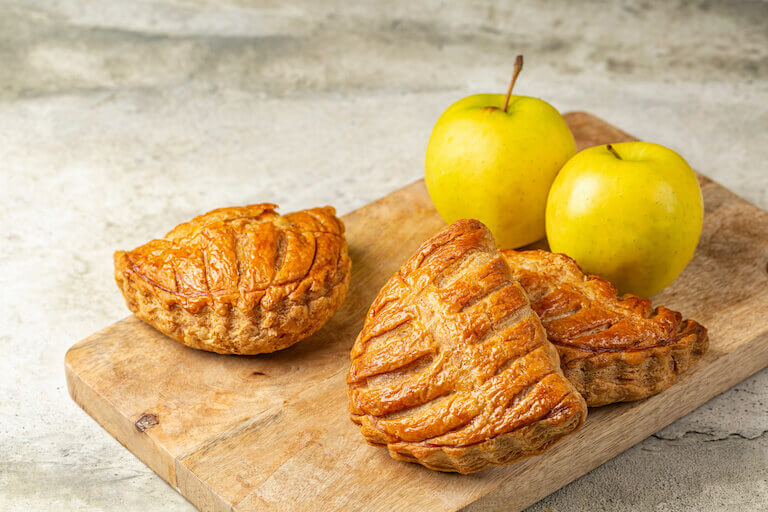 Even if you’ve never had brioche, you’ve probably seen this golden, flaky loaf at a bakery or grocery store. Brioche is technically a bread, but with eggs, milk, butter, and sometimes brandy added to its composition, it turns out quite a bit sweeter than your average baguette.

It’s a versatile bread often stuffed with sweet or savory fillings – anything from raisins to chocolate chips to fruit to foie gras – and might be found in braided form, as a fluffy roll, or in a circular loaf. 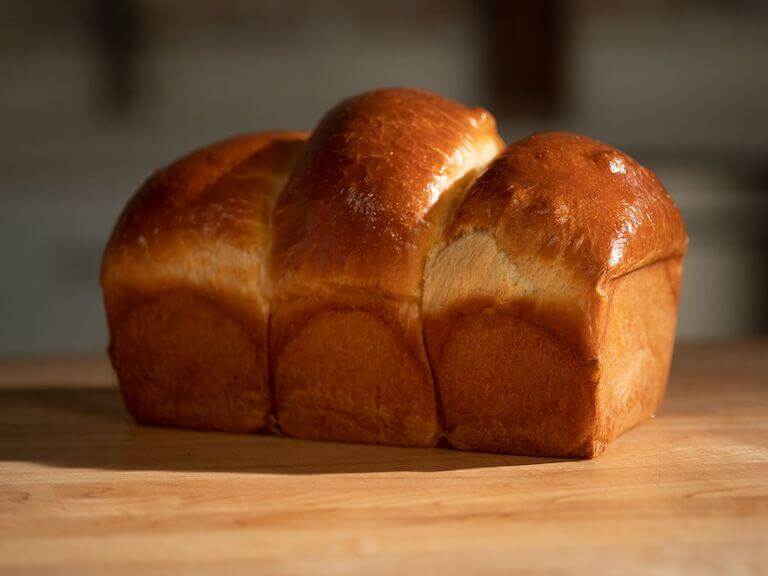 In keeping with the very characteristic trend of using fluffy, flaky dough in viennoiserie, the oranais uses puff pastry as well. The puff pastry is stuffed with apricots and a crème patisserie made of milk, eggs, vanilla sugar, and corn flour.

It’s often served with a dusting of powdered sugar or crystal sugar. Try Your Hand at the Pastry Arts

Escoffier’s degrees and diplomas in baking and pastry arts include a course covering the geographical and cultural influences on desserts from around the world. 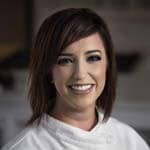 “You come to the industry saying you want to bake cakes, for example. But in baking and pastry school, you may find an area that you love even more. There are many things we make that you may not have been exposed to.”
Executive Chef Anne Lanute, Escoffier Chef Instructor*

Besides discovering the rich histories behind many beloved baked goods, students can hone their baking skills and perfect their own takes on classic recipes. A variety of viennoiserie, pâtisserie, and boulangerie items may be explored.

If you’re interested in finding out more about our pastry arts programs, contact an Admissions Representative today!

Read more about the baking and pastry arts:

This article was originally published on August 16, 2014, and has since been updated.

How to Become a Pastry Chef