If there’s one word that describes Auguste Escoffier School of Culinary Arts student Chris Marhevka, it could be energetic. With a master’s degree and career in social work and mental health on his resumé, he decided to pursue another passion—the culinary arts.

First on the agenda? An Associate of Occupational Studies Degree in Culinary Arts at Escoffier’s Boulder campus.

Find out where Chris funnels his boundless energy, and how he envisions combining sociology and food after he receives his degree!

“I Wanted to Make the Most of My Life”*

Chris already had a meaningful career when he found Escoffier. As a social worker and mental health therapist, he spent his twenties helping individuals and couples to navigate what could be the most difficult times in their lives.

That work took on a whole new slant in 2020, with the COVID-19 pandemic. Chris worked in the emergency room at the reputable Cleveland Clinic during the height of the pandemic—a job that took a toll.

“I was just feeling burned out,” he says. “I still love social work, but I knew that I needed to switch up my life somehow and bring a little more balance into my life, a little more levity.”*

Chris had always loved cooking. As a kid, he would help his mom with the cooking for the parties she loved to throw. And he was an enthusiastic home chef. Why not go further?

“So I hopped online one day and I did a Google search [and found Escoffier]. I knew I loved Colorado. I had it in the back of my mind that I wanted to move out here eventually, so I thought, ‘Two birds, one stone. I’ll enroll in culinary school [in Boulder].’ I [had a couple of meetings] with the admissions department, and then the next thing I knew, I was applying, finding a place in Boulder, and getting out here!“*

“I wanted to make the most of my life, and I didn’t want any sort of aspirations to go unspoken and unexplored. I figured now is the time to put it into action. So here I am.”*
Chris Marhevka, Escoffier Culinary Arts Student, Boulder 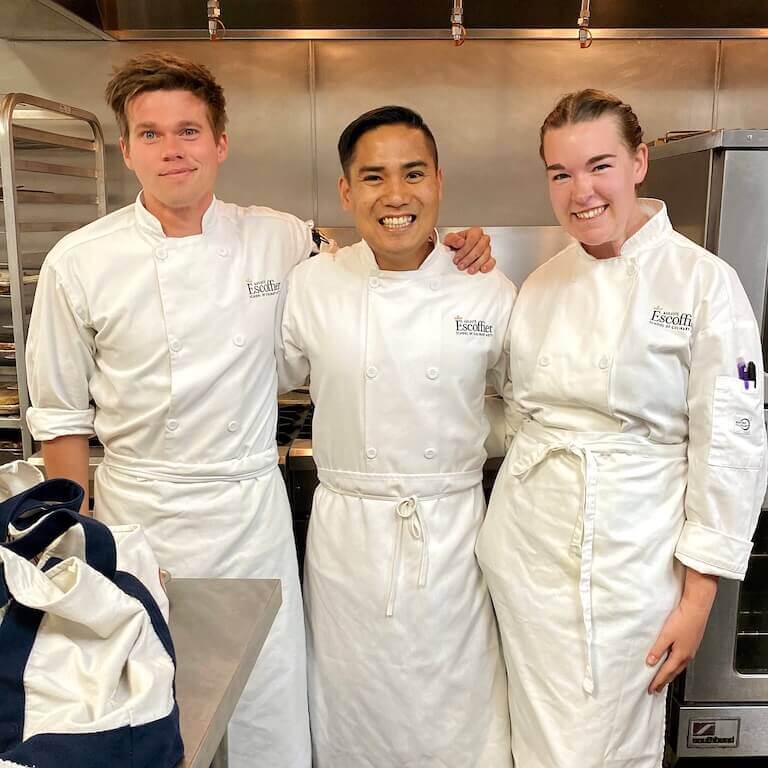 Chris isn’t the type to rest on his laurels! He’s got lots to do and he does it.

Usually he starts his day with a workout at the gym. This may even include multi-tasking, pulling up YouTube videos of cooking demos while he’s on the treadmill to pick up tricks of the trade while he exercises.

Next, he sets himself up for success by reviewing the procedures on the day’s class schedule.

Chris also works part-time, in addition to attending school. “I still had almost a decade of experience in a different field, and I was not about to just walk away from that. So I’m still a therapist part-time. I have a caseload of 10 to 12 clients per week. It’s a lot, so I need to make sure that my time is very well-managed.”*

Outside of his school and work obligations, Chris takes advantage of everything Boulder has to offer, both indoors and out.

“There’s plenty to do. Summer festivals, concerts. In the winter you can ski or snowboard. Just enjoy the atmosphere of it all.”*
Chris Marhevka, Escoffier Culinary Arts Student, Boulder 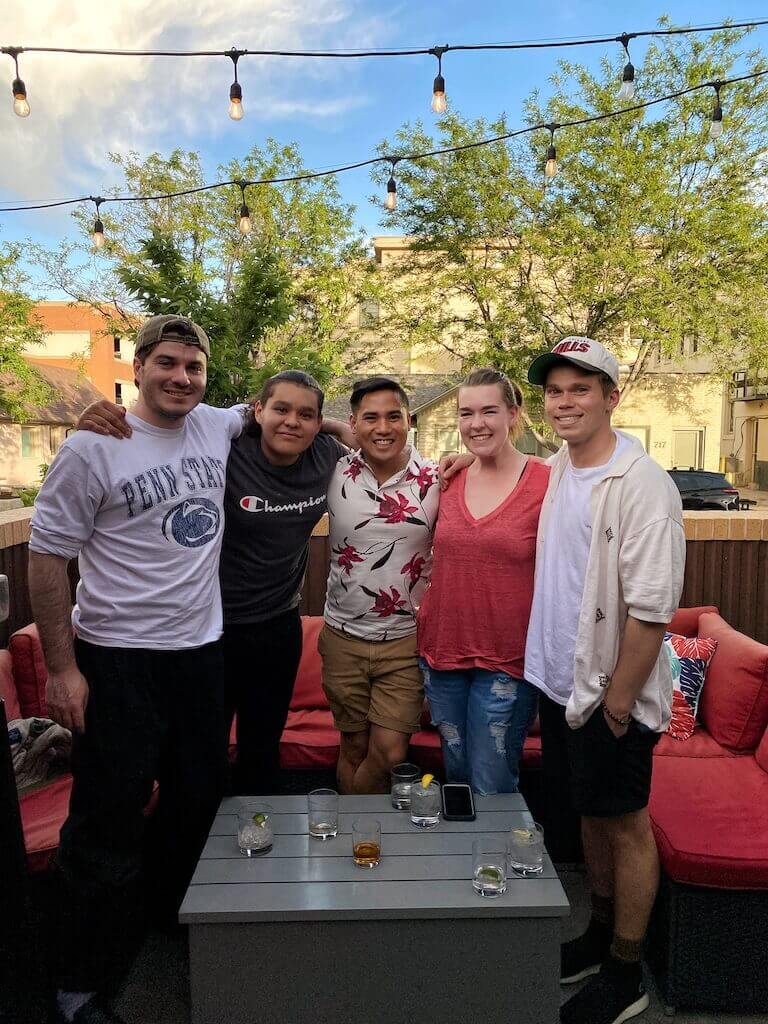 He also gathers with the friends that he’s made in class to talk about food, try new restaurants and food festivals, and explore the many neighborhoods in the Boulder area.

Culinary School as an Adult Learner

Even though Chris has a Master’s Degree, he still had to adjust to returning to school at Escoffier at age 30.

“I had been a home cook, but cooking restaurant quality food is a whole different game,” he says. “The Escoffier student population ranges from kids just getting outside of high school to people who are on their second, third, and fourth career paths. It was definitely a diverse group. People were cooking circles around me who were, like, half my age,”* he laughs.

But he approached his classwork with optimism and soon found his stride. “As long as you’re able to approach a new experience with that open mindset, then you learn so much more. You’re able to humble yourself and take in what’s being said, and accept critique. If you’re able to process all of that in a productive way, then it’s going to serve you for the rest of your life.”* Plus, Chris found that he had transferable skills that he could bring to the culinary world. One was knowing how to handle himself under pressure.

“My first job was a crisis intervention specialist,” he explains. “I was dealing with very traumatic experiences for people, meeting them at some of the most vulnerable points in their life. Knowing how to have empathy for people who are struggling—that’s definitely something you can apply to any sort of field.”*

Things can get intense in the kitchen, so Chris thinks it can help to be able to regulate your emotions. Effective communication and setting boundaries are two other skills that he brings from his previous career.

While he sounds confident now, there was a question in his mind if it was too late to attend culinary school. Ultimately, he decided that pursuing a degree and a career in food was what he was passionate about, and he was on no one’s timeline but his own.

“There’s this romantic notion that your grandma was teaching you how to cook by the time you were 5 or 6. That doesn’t have to be your story in order to go to culinary school, in order to be a cook, to be a chef, to be in the food industry.”*
Chris Marhevka, Escoffier Culinary Arts Student, Boulder 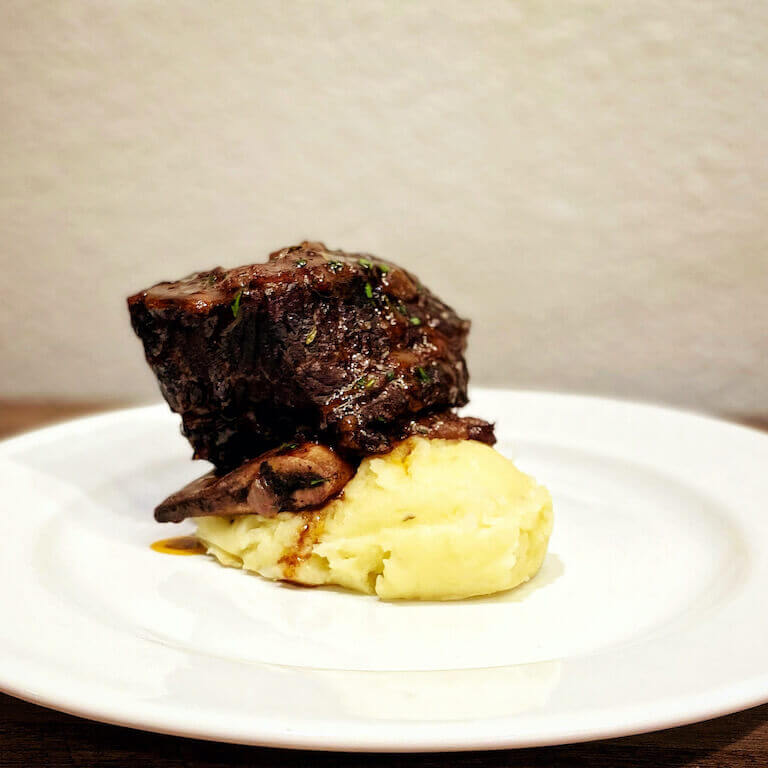 Finding Support at Escoffier: “Everyone Here [Loves] the Work That They Do”*

Chris is enthusiastic about his time at Escoffier. He found his Chef Instructors “more than willing to stay after class, or meet before class, and have discussions. Because they care about food. They care about students.”*

While working as a line cook at Japanese restaurant Osaka’s in Boulder, Chris found himself with questions. “Things would come up that I just didn’t have familiarity with. Chef instructors would be more than happy to talk to me about how to navigate those sorts of learning experiences.”* Chris on the job at Osaka’s

A few Chef Instructors really stood out to Chris during his time at Escoffier.

“Chef Eugene Kwak pushed me to be more adventurous in my cooking,” Chris explains. “His out-of-the-box thinking in World Cuisines sparked fascinating conversations on flavors, ingredients, textures, and style. His willingness to discuss such topics in-depth inspired me to do more research on my own time and elevate what I was bringing to the table, metaphorically and literally.”*

Another standout was Chef Julia Wolfe. “Chef Julia has a talent for holding students to high standards while nurturing their ambition along with their technical skill. Her mentorship allowed me space to humble myself when I had room to grow, but her tactics were rooted in empowerment, with a keen ability to recognize potential and reflect that potential back to students so that they see it within themselves.”* 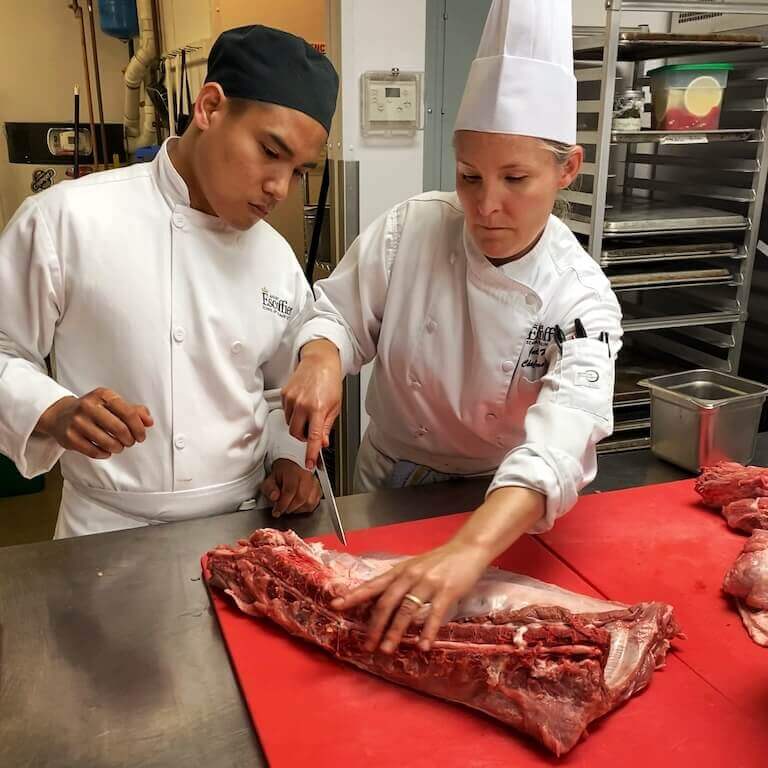 Chris also got help finding his externship from the Career Services department. As he explains: “[Career Services]…had spoken to our director of [General Education], Chef Susan Yurish, and asked her for recommendations for students that she thought would be appropriate for [an externship at La Marmotte in Telluride]. Kate Sweasy sent over my application and my resume, and assisted me with setting up the interview…Within a week, I had an externship placement and I was figuring out the logistics of [getting to Telluride]. That wouldn’t have even been a possibility for me if it had not been for the Chef Instructors and the support staff at Escoffier.”*

“I’m Really Open To Whatever Opportunities Present Themselves”*

What does the future hold for Chris and his boundless energy? He’d like to get into food media, but he’s leaving his options open.

“I’ve always loved reading essays, memoirs, cookbooks, watching TV shows…Showcasing minority populations and giving them their due credit in building up American food [is] really inspirational for me. I would love to be a part of that conversation…giving a voice to people who have been overlooked, who have been underappreciated, who have been exploited in a lot of ways in this industry. Now that they’re rising to prominence…I want to be a part of highlighting that and giving a voice to that.”*

He’s already started his own food blog, Cook Until Brown, where he shares his journey in food and cooking. He hopes it will grow to help amplify the voices of people of color in all aspects of the culinary industry. 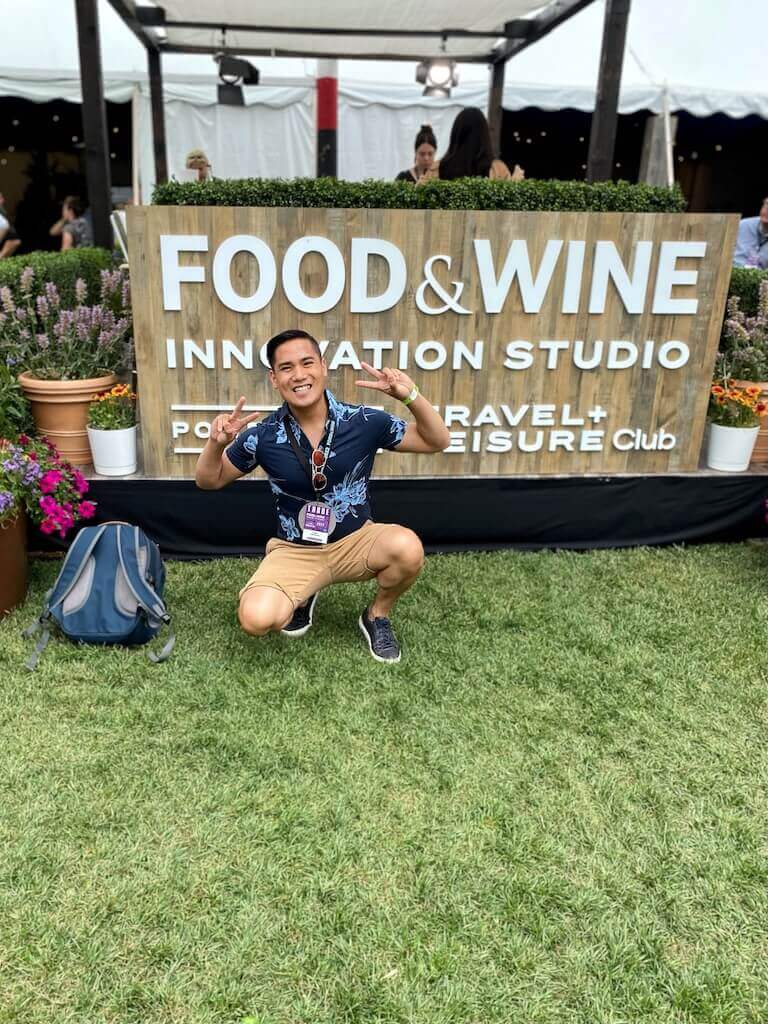 Chris at the Food & Wine Classic in Aspen, Colorado

Chris sees a natural intersection between his first career in social work and his new knowledge in food and cooking. “Hopefully, I can use my skills as a sociologist, getting to know people within this industry and helping them tell their stories,” he says. “That’s what I want to do. Cooking is very joyful for me. But even beyond that, I feel like Escoffier is setting me up to hone my culinary voice and take up space in this industry. And [I want] to help other people who are struggling with that same process, to help them achieve that success as well.”*

“Is This Something You Want to Do?”

And if you do feel passionate about it, “…then this school, Escoffier, can set you up for that success. They will see that passion from you, and they can help you foster it.”*

With all his energy and enthusiasm, we have no doubt that we’re going to continue to see wonderful things from Chris going forward!

While Chris’s time at Escoffier is coming to a close, yours could just be beginning. Explore all the culinary programs that Escoffier has to offer, and find out how you could turn that education into the perfect career for YOU.

A Busy Mom of Two Balances Family & Culinary School: “I Want to Graduate with Honors”

From Substance Abuse to Culinary School Graduate: A Journey of Redemption