Adjusting to civilian life after a military career is a challenge that many veterans face. Without the strict schedule and camaraderie of the unit, it can be difficult to find your bearings and start on your next chapter.

Escoffier graduate and Army/Navy veteran Lance McWhorter faced this challenge too. His solution was to throw himself into a culinary career and become the best chef he could be. With his own restaurant in East Texas, a Food Network appearance, and a major competition victory under his belt, it’s safe to say he’s succeeding at his goal!

The Makings of a Military Man

“I was kind of a homeless, wandering kid,” Lance says. “I house-hopped. But I always had either part-time or full-time jobs in restaurants. It was kind of like the ‘home for wayward kids.’”

Lance found comfort in that stability, and when it was time for his next steps, he turned to another stabilizing influence—the United States Army. Lance enlisted at age 17, and spent four years in the Army, followed by four years in the Navy.

After his time in the service, Lance looked for another way to serve back home. He worked as a professional firefighter and EMT for several years, but a back injury forced him to retire at the age of 30.

Lance spent the next few years “enjoying the childhood [he] never had.” He played in a band and let himself relax for a while. But at age 34, he headed back overseas as a security contractor for the State Department and the Department of Defense.

Military veteran and soldier Lance McWhorter in An Nasiriyah, Iraq in 2011

Finally, at age 39, over 20 years since his last restaurant job, Lance decided that it was time to pursue a new path. He had maintained an interest in cooking and restaurants during his various careers, reading chef biographies and keeping that “home for wayward kids” in the back of his mind. Maybe the restaurant world could be his home once again.

He started out working on the line at a few restaurants in the Central Texas Hill Country. But he wanted to excel, and he knew that in order to do that, he would need an education.

At first, Lance was skeptical of attending an online culinary school, although the convenience it offered was attractive. Another chef friend helped him to decide. The friend had studied under Escoffier’s Boulder campus Executive Chef at the time, Graham Mitchell. Lance’s friend said that if Chef Graham was involved, it had to be good!

So Lance enrolled at Escoffier in 2015, and he absolutely loved it.

“It’s amazing how they translate the cooking and learning experience into an online medium,” he says. “You’d think it would be really difficult, but it’s not.”

Lance was working 80- to 100-hour weeks as an executive chef when he started his culinary program. And about a third of the way through school, he moved from central to East Texas and started working on a new restaurant concept—designing the kitchen, building the menu, and opening their doors to the public.

“I couldn’t have [gone to culinary school] if it wasn’t online,” he says. It was a busy time, but it was worth it.

“Even when I was the executive chef, I still needed to learn. I still needed to grow. Everything about you—your cooking chops, your palate, your knowledge base, your creativity-—need to always be expanding.”
Lance McWhorter, Escoffier Online Graduate; Executive Chef/Owner, Culture ETX; Food Network’s “Chopped” Contestant

Now, he always sticks up for online culinary education. “I’m pretty notorious for jumping on Escoffier threads and getting into it,” he says. “It’s definitely a program that I believe in, and it’s one that I recommend as long as [the students] have realistic expectations. History, terminology, calculating COGS, profit margins, profit/loss, product waste—there’s so much more to learn than just cooking.”

Plus, he told us, if famous chefs like Thomas Keller or pitmaster Aaron Franklin are comfortable teaching online masterclasses, then there must be something to it!

“I’m already winning contests and built my own restaurant. I kind of fast tracked myself. And I really feel like Escoffier was a huge part of that.”
Lance McWhorter, Escoffier Online Graduate; Executive Chef/Owner, Culture ETX; Food Network’s “Chopped” Contestant

Life After School—Competition, Culture, and Cochon

Lance has been on an upward trajectory since Escoffier graduation day in 2016. After he finished school, he spent some time as Executive Sous Chef at S?R Steak + Spirits at the Hilton Anatole in Dallas. It was a great job with cushy benefits. But when an opportunity opened up to cook for a well-known chef Matt McCallister at James Beard nominated FT33, he had to take it.

“I remember telling [my wife], ‘I’m going to quit this job to go work as a line cook for this madman of a chef that’s doing all sorts of crazy things in his restaurant, and I’m going to make like, less than half what I’m making here. What do you think?’”

As an accomplished pitmaster herself, Lance’s wife understood and supported his decision. And it was a decision that paid off.

“When you’re working for restaurants that have nominations for things like [James Beard Awards], and they’re cooking at that level, it really teaches you a lot of things.” 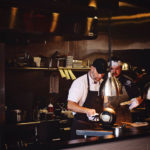 Beyond becoming the best chef he can be, Lance also wants to help veterans who are looking for their next steps.

“I always kind of harp on trying to get more veterans in the kitchen,” he says. When his wife suggested that he apply to “Chopped” on the Food Network to get more visibility for that message, he initially resisted. But after thinking about it, he felt like “Chopped” was an honest cooking competition without the gimmicks of some other shows. So he applied and was accepted!

Lance filmed his episode in 2018, and it aired in 2020. It was a long day, but he enjoyed the experience. He made it to the dessert round before he was “chopped.”

“Don’t tell my pastry instructor that,” he jokes.

In 2019, Lance moved back to his roots in East Texas, where he opened his current restaurant, Culture ETX.

“I traveled so much in the military and as a security contractor, and I was exposed to so many cultures,” Lance says. “I always had a passion for food and dining. So when everyone else was out partying, I would dive into the local culture where they didn’t speak English and eat there.”

At Culture ETX, Lance combines inspiration from his international travels with the way his East Texas grandma taught him to cook. It’s a little soul food, a little creole, and a little world cuisine all in one.

“I like having a place people can go to that will satisfy everyone. We will always have something you want. Homemade pasta or awesome tacos. Spanish-inspired octopus with Mexican influences. It’s me on a plate, on the walls, on the soundtrack, in the art. It’s my own little Generation X anthem.”
Lance McWhorter, Escoffier Online Graduate; Executive Chef/Owner, Culture ETX; Food Network’s “Chopped” Contestant

Another exciting milestone for Lance was being invited to compete in Cochon 555 in 2020. As he describes it: “Cochon 555 is a very prestigious heritage pork whole animal utilization competition. They have nine stops in the U.S., with five chefs and five farmers at each stop. You get paired up with a farm, and you get a whole pig, but you have to prepare six dishes to feed 13 judges and about 500 to 600 attendees.”

And his team won!

The local winners assemble for a final competition at Grand Cochon in Chicago, but the 2020 finale was delayed due to COVID-19. He’s looking forward to competing again when the competition resumes.

Veterans Find a Natural Home in the Kitchen

Lance feels that the culinary world is particularly attractive to veterans.

“There’s structure, attention to detail, sometimes a little chaos,” Lance says. “You feel at home on the line, like an extension of military life…When you look at [Auguste] Escoffier, he was a French military guy. The brigade system is based on military ranks.”

That brigade de cuisine hierarchy is very comfortable for veterans who want to know exactly where they stand within an organization. Plus, Lance finds that there’s a similar esprit de corps in a kitchen—a feeling of pride and fellowship with your team.

“I harp on getting more veterans to the kitchen—it’s a good world for us. …That structure definitely helps fill that void, the loss [of leaving the military].”
Lance McWhorter, Escoffier Online Graduate; Executive Chef/Owner, Culture ETX; Food Network’s “Chopped” Contestant

“You can’t just go to culinary school and go work at a restaurant and be the chef,” he says. “You’re gonna have to dig in and work hard and learn. And military people adapt really well to that. We’re used to changing duty stations or going to a new unit.”

He also reminds veterans that when they’re transitioning back into a new career, they’ll be working alongside some very young coworkers!

“You’re out there with 22-year-old kids who are really good and 10 to 20 years younger. I’ve worked with some line cooks that were half my age and terrified me to work around,” he laughs. 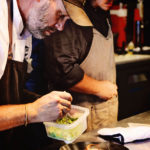 “Whether it be in the culinary world or another profession, just don’t lose sight of that goal that you’ve set for yourself. Don’t be discouraged.”
Lance McWhorter, Escoffier Online Graduate; Executive Chef/Owner, Culture ETX; Food Network’s “Chopped” Contestant

It can be tempting for veterans to live in the past instead of focusing on their futures.

“Don’t lean too heavily on the vet status things,” Lance suggests. “Remember it, embrace it, enjoy the respect and admiration that comes with it. But put your brain into what you’re doing. If you want to be a chef, be the best.”

That’s what Lance has been doing, and it’s paid off.

At Escoffier, we are grateful and proud of all of our military service members. With our Boulder campus designated a Military Friendly® school, Escoffier embraces both veterans and active-duty military, as well as their spouses. Get some guidance in your transition from military service to food service and start an exciting new career in the kitchen!

A Practical Guide to Culinary School for Active Military, Veterans & Their Families