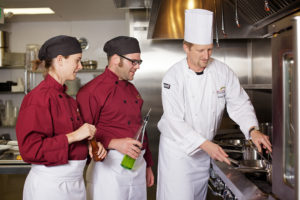 All chefs could use a little advice every now and then.

Harper Lee – the author of the seminal novel “To Kill a Mockingbird” – once remarked, “Many receive advice, only the wise profit from it.” It’s easy for many people to feel as if they’re in control of their personal fate. Yet advice is one way to learn from those with other kinds of experiences and to reevaluate your own opinions or stances. That’s especially true for those who are enrolled in a culinary arts program, as the proper advice can help you develop the skills necessary to become a successful chef. Here are some words of wisdom from true kitchen gurus:

Dig into the past
Tony Mantuano is a chef at Spiaggia, an upscale Italian restaurant located in the heart of Downtown Chicago. Speaking with The Thrillist, Mantuano said that more chefs should take a more traditional approach to their cooking. By that, he meant that chefs should draw inspiration from various cultures to influence and develop their culinary approach. Let’s say, for instance, you want to work in an Italian eatery like Mantuano. Dive into the culture as much as possible: Read old recipe books, speak with seasoned chefs and make pasta dishes during your free time. The more you know about a culture, and the better you understand the major components of its cuisine, the more skilled you’ll be at preparing those dishes.

Respect your tools
Each chef has a different perspective on what tools to use in the kitchen. Some swear by a certain brand of knife, while others tend to think a kitchen isn’t complete without a hand-turned fruit peeler. While there are so many options, it’s worth listening to someone like Dan Kluger, the 2011 winner of the James Beard Award for Best New Restaurant and the former chef de cuisine at ABC Kitchen. He told First We Feast that all chefs need to have the following in their toolkits: vegetable peeler, mandolin, Japanese knives and a microplane. Beyond that, the mark of a great chef is how well you care for your tools. The cleaner they are, the longer they’ll last, and Kluger said that very quality exemplifies a truly great chef. Learn from your mistakes with pride
Originally hailing from England, April Bloomfield landed her first job as a sous chef at the age of 25. Over the years, she’s gone on to run several kitchens and published a few cooking-centric books. So how did she manage to get to where she is? By making plenty of mistakes, as she revealed to Fortune magazine. When she made a mistake, Bloomfield said she would take the time to understand what she had done and find ways or techniques to avoid any repetition. As a young chef, you’re bound to make mistakes, and the more you embrace that, the less pressure you’ll feel overall. Bloomfield also said that part of this entire process is having the proper patience and sense of self-reflection, both of which are invaluable to understanding yourself as a person and a chef.

Avoid the cooking rut
Gordon Ramsay is best known as the rather caustic host of several cooking shows. Given that he’s won several Michelin awards himself, he’s not afraid to point out when competing chefs are mucking up a dish. Yet despite that slightly ornery image, Ramsay gave some incredibly warm and rather comforting advice during a Reddit Q&A in August 2015. He told one young chef to give himself a break, literally and figuratively, when cooking becomes too much to handle. If you feel yourself becoming distracted or uninterested, walk away for a few minutes and let yourself breathe. If you find you can’t come up with any new ideas, cook up some old favorites to remind you why you love cooking in the first place. And don’t be afraid to take a night off and enjoy someone else’s cooking.

Don’t feel as if you have to do exactly as another chef tells you to. Instead, use advice as a springboard, a way to better understand yourself and any situations you may be in. Ultimatley, though, you’re going to need to try and carve out your own path as chef.