Blog > Culinary Arts > 4 Ways To Get Creative With Your Tacos 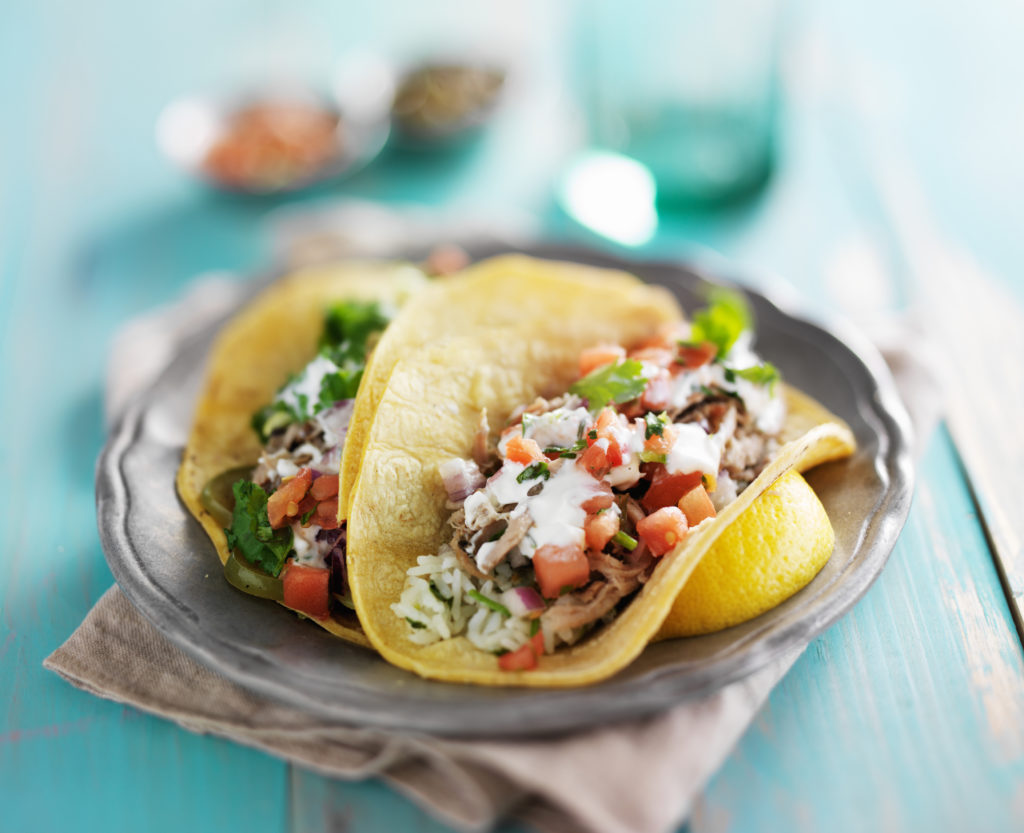 Almost everyone loves tacos. After all, what’s not to like about a bunch of delicious ingredients, perfectly customized to your taste, all wrapped up in a tortilla for maximum portability? Classic fillings like steak, pastor or chicken will satisfy most appetites, but Austin culinary arts students should consider getting a little more inventive. Here are four recipe ideas to get you started on breaking away from  the norm with your tacos.

“Consider getting a little more inventive with your tacos.”

Combine the sauce with the rest of the taco filling, including chopped yellowtail fillet, onion, jalapeno, lime juice, more yuzu juice, cilantro and the spice blend shichimi. Place the mixture in the refrigerator for half an hour while turning gyoza dumpling wrappers into taco shells. You’ll accomplish this by shaping the wrappers and frying them in oil at 350 degrees Fahrenheit until they turn a golden brown.

Make guacamole by blending avocados, lime juice and shiso. Place guacamole in the shells and then add the filling. Garnish the tacos with romaine lettuce and radish and serve with hot sauce.

2. Combine two classics
Huevos rancheros are a beloved breakfast dish, and Cooking Light suggested a way to bring eggs and salsa together with a taco. Coat tortillas with cooking spray, set them on a cooking sheet and then broil on a high setting for two minutes. Flip the tortillas and add shredded cheese and black beans.

Broil the tortillas another minute or so, watching for the cheese to melt. Coat a skillet with olive oil and place on medium-high heat. Cook eggs for two minutes before covering and continuing to cook until until the whites set. Set an egg on top of each of the tortillas, topping with pepper, pico de gallo, crema, cilantro and chopped avocado.

3. Spice up your chicken tacos
Chicken tacos are great, but Mountain Mama Cooks made them even more exciting with a Thai-influenced marinade. Prepare the marinade by combining brown sugar, rice wine vinegar, tamari sauce, Thai fish sauce, sambal oelek chili paste, sriracha, grated ginger and garlic. Cover chicken thighs and allow at least a few hours for them to marinate.

Use a whisk to combine peanut butter, tamari, brown sugar, lime juice, sambal oelek, garlic and ginger. Set the peanut sauce in the refrigerator until needed. Place the chicken on a lined baking sheet and bake in an oven set to 425 degrees.

After about half an hour, take the chicken out of the oven, check for doneness and cut into small pieces. Place the chicken on warmed tortillas with carrots, cabbage, red pepper, cucumber, scallions and cilantro. Top the tacos with the peanut sauce.

4. Add chocolate to your tacos
Most people save their chocolate for dessert, but Running to the Kitchen offered directions for including extra flavor in your beef tacos. First, pour coconut oil into a skillet and set over medium-high heat. Saute minced shallot for up to three minutes before adding garlic for another 30 seconds.

Place ground beef in the skillet and cook for five minutes or until browned. Stir in green chili peppers and tomato paste. Then, add unsweetened cocoa powder, cinnamon, cumin, allspice and salt. Cook another minute or two, and spoon the chocolate chili filling into tortillas with your favorite toppings.

Students attending culinary academy discover many intriguing ways to serve up old favorites. The versatility of tacos makes them perfect for experimentation.